The interior of The Village, once a processing plant, among other things, has been transformed into an event center for wedding receptions, business meetings and sports events. Owner Alissa Kern-Pierce made the chandelier. 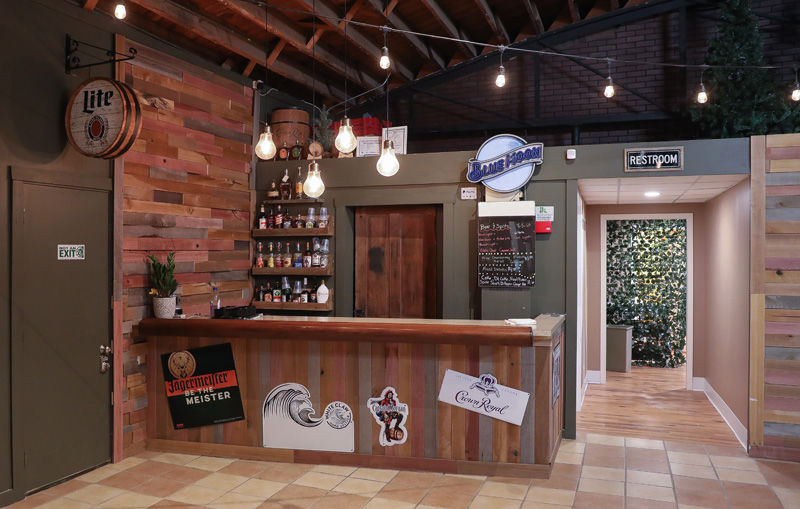 The bar, tucked into a corner of the main room, carries out the industrial rustic theme of The Village. 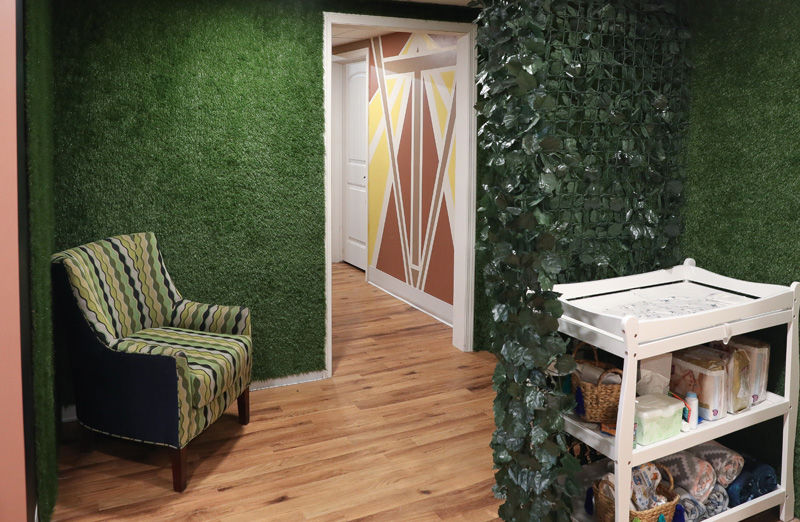 The Village’s large restroom has six private lavatories, each painted in a vivid color, for use by both men and women. It also has a changing table, at right, and a private area for nursing mothers. 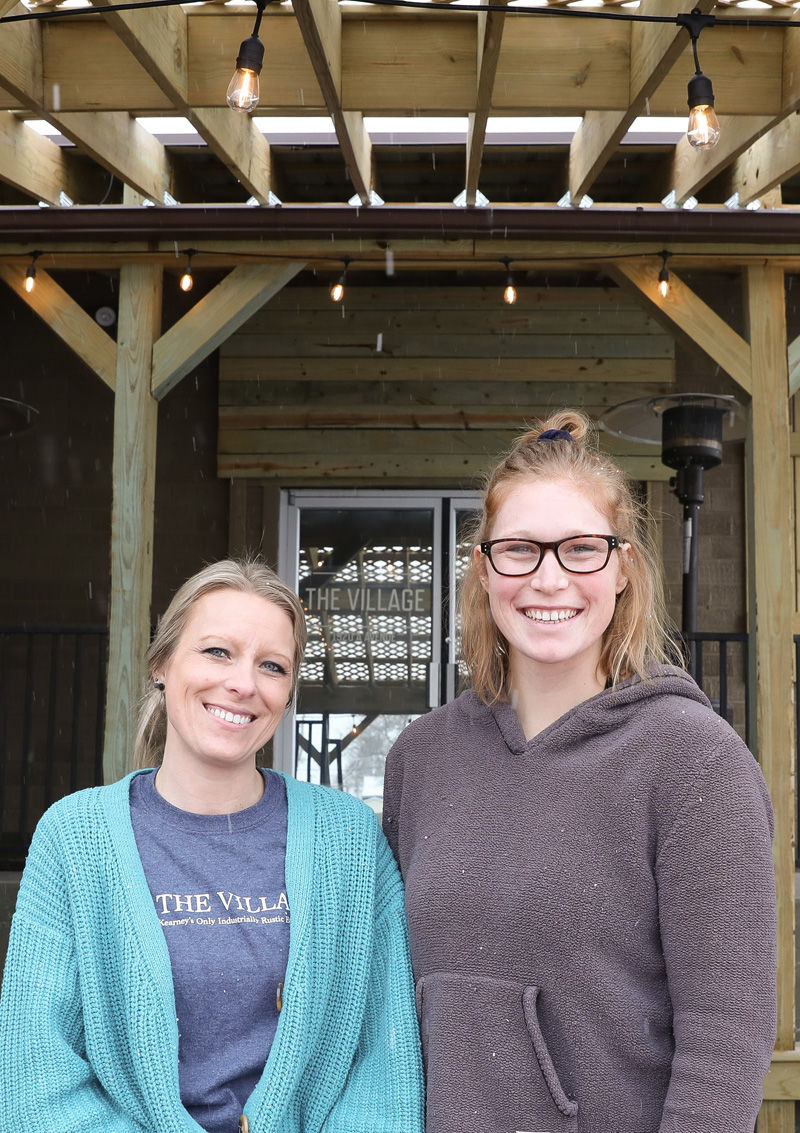 Alissa Kern-Pierce, left, is the owner of The Village. Morgan Karlberg recently was hired as an assistant.

The interior of The Village, once a processing plant, among other things, has been transformed into an event center for wedding receptions, business meetings and sports events. Owner Alissa Kern-Pierce made the chandelier.

The bar, tucked into a corner of the main room, carries out the industrial rustic theme of The Village.

The Village’s large restroom has six private lavatories, each painted in a vivid color, for use by both men and women. It also has a changing table, at right, and a private area for nursing mothers.

Alissa Kern-Pierce, left, is the owner of The Village. Morgan Karlberg recently was hired as an assistant.

KEARNEY — Alissa Kern-Pierce loves to find things that are falling apart and put them back together.

That’s what she did with The Village at 1920 Avenue A. In just six months, she transformed the dilapidated warehouse into an event venue that can host more than 250 people, complete with a beer garden and a small apartment.

“I’m not a flipper,” she said. “I like to feel places out and find the right idea of what to do with them. A lot of emotion goes into it.”

Help from others goes into it, too, which is why she and her husband Ryan named the venue The Village.

“I can’t do it alone, or life, either. I always have a village with me — friends, family, people I meet at church. When I say ‘we,’ that is what I mean.”

It’s paying off. Since opening in October, The Village has been booked most weekends, and it’s already filling up into 2021.

Kern-Pierce purchased the nearly 80-year-old structure last April 23, partly on a whim. She had “kicked around” the idea of purchasing it, and since the price was right, she did.

“I went inside and I thought, ‘This is cool!’ There was something about the beams,” she said.

It hadn’t changed since her Gibbon High School prom had been hosted there in 2002. Back then, it was called The Boxcar, but it had been empty since that business closed eight years ago.

She pondered turning the place back into an event hall.

“We had water behind the walls, behind the paint. The building was leaking everywhere.”

Under the round ceiling, “water was going into little valleys on the side. It ran down the inside of the walls, on the brick, on the drywall, on the new paint we’d just put on. Water was coming up along all the walls. I was just devastated,” she said.

An employee tore out the walls and parts of the ceiling to find out where the water was coming from. He found mold.

“We planned to tear all that out anyway, so we did that, but then he said, ‘I think I’ve found dry rot up here.’ We knew if there was dry rot 15 feet above the water damage, the whole roof needed to come down. I was freaking out. I wondered, ‘Can we afford this?’” Kern-Pierce said.

Needing a break, she and Ryan went for coffee at Calico Coffee on Avenue A.

“I happened to look up at the ceiling and I saw exposed beams. I thought — what if we just take the ceiling down and expose what’s underneath?’” she asked her husband.

He gave her the green light.

At that moment — one of many so-called “God moments” on this journey, she said — the project began to turn around.

Kern-Pierce went back to the building and told the workmen to take down everything on the ceiling to see what’s underneath. The crew found black beams and charred wood.

Kern-Pierce learned that the structure had burned when it was being built in the 1940s, but that fire was quickly extinguished, and the builders “just covered it up. It’s been well-preserved,” she said.

When the walls came down, the couple discovered more water behind the walls and insulation.

“I knew how much money I had to put into this, but this is not the way I wanted to spend that money,” she said. Still, they moved forward.

The only original thing they kept was the floor. Everything else — walls, ceiling, bathrooms — was replaced.

Kern-Pierce and Ryan did much of the work themselves. They also used friends and their teenagers. The couple has a blended family of six children, aged 4 to 17.

“It was our village,” she said.

Meanwhile, they applied for a liquor license, but they knew that due to a conflict of interest within the licensure process, Ryan would have to quit his full-time job.

“Then he got an inheritance. He has always wanted to be a massage therapist, and he got the exact amount he needed to go to school. Again, God was trying to tell us something,” Kern-Pierce said.

The Village had its grand opening Oct. 15, but the couple still was tackling last-minute tasks the day before. They are still finishing a bridal suite that has a studio bedroom, a washer and dryer, a full-sized bathroom and more features.

The suite already is reserved for May 1.

“It’s a place for a bridal couple to stay, where brides and bridesmaids can get ready and more. It’s one more thing that other venues don’t have,” she said.

Three days after The Village opened, Kern-Pierce appeared on local TV. She then got an e-mail from Morgan Karlberg, whom she had never met, asking for a job.

“I chewed on it for awhile. I didn’t know if we were ready to hire someone, but she and I had coffee one morning, and I prayed about it. I said, ‘If this is supposed to be, let me know.’”

The next week, Kern-Pierce showed the venue to prospective clients every single day. She booked seven more wedding parties, even into 2021.

“My prayers were being answered. I realized I couldn’t do everything by myself. I called her.”

Karlberg, who had been a package designer at Baldwin Filters, started Jan. 10 at the The Village.

“I love hospitality. I am creative. I felt like God was calling me into something different, so I reached out to someone I didn’t know. It’s cool to see how everything lined up,” she said.

The Village keeps Kern-Pierce busy. She and Ryan are on site for every event. They do their own cleanup. Other than extra help from bartenders and servers, they do it all themselves. They can host corporate receptions and trainings.

One recent weekend, they hung a 17-foot TV on the wall and showed UFC fights to about 120 people. Kern-Pierce envisions cornhole tournaments, music festivals and concerts. The hall has a parking lot for 100 cars.

Wedding couples can have the rehearsal dinner, ceremony and post-wedding brunch all in one place.

“We’re a traditional town and people get married in churches, but we can offer a different setting,” she said.

The site has six individual, brightly decorated unisex lavatories and a cozy room where mothers can nurse their babies.

The Village does not do catering, but it has a large kitchen, so clients can bring in food or hire their own caterer.

The voice of God

Kern-Pierce had no idea how fast the business would grow. As an investor, she knew she could lose money the first year.

“The second year, you fix what didn’t work the first year. By the third year, I had to decide whether to sell it or keep it. But we’ve already reached the third-year level even though it’s only been in business for six months.”

She gives God the credit.

When her husband saw the finished wall, he said, “How did you know how to do this?”

“This was a huge undertaking. We were praying so much for other things, but this is what happened,” she said. “Kearney needed this.”

The Village was built by Ed Fox in 1940 as a beef processing plant for his company, Fox Processing & Produce.

Cows were brought into the building, slaughtered and hung where the bathrooms now are located. The floor is slightly tipped for draining the blood.

That south side of the railroad tracks, where The Village sits at 1920 Ave. A was home to many markets and butchers.

Alissa Kern-Pierce, who bought the building last April, said she met a woman who had been an employee who handled poultry for Fox.

“She would get an egg, crack it and smell it. If it was bad, she put the egg in the trash. She put good eggs into a bucket. Many eggs were freeze-dried and sent to soldiers in World War II,” Kern-Pierce said. “She said it was the worst job in her life, but hearing about the person who built this place makes it more than just a banquet hall.”

Fox had contracted with the U.S. government for various projects during the war, but after the war, those contracts were gone, and business sputtered. By 1947, Fox filed for bankruptcy, and the building was sold at a sheriff’s auction.

Records do not exist again until the 1970s, when the Anderson Brothers bought the building and used it for storage. They sold it 21 years later to Dave and Tammy Sikes, who owned The Boxcar. It closed in 2012. The building had been empty since.

At a recent event, a young woman told the Kern-Pierces that her grandparents had lived in the building 60 years ago and hosted reunions and birthday parties there. She had always feared someone would buy the old place and tear it down.

Twenty years ago, she and her brother Matthew left their handprints in the concrete outside the main door. Those handprints still are there.

Kern-Pierce was stunned. “I’d looked at those handprints every day,” she said.