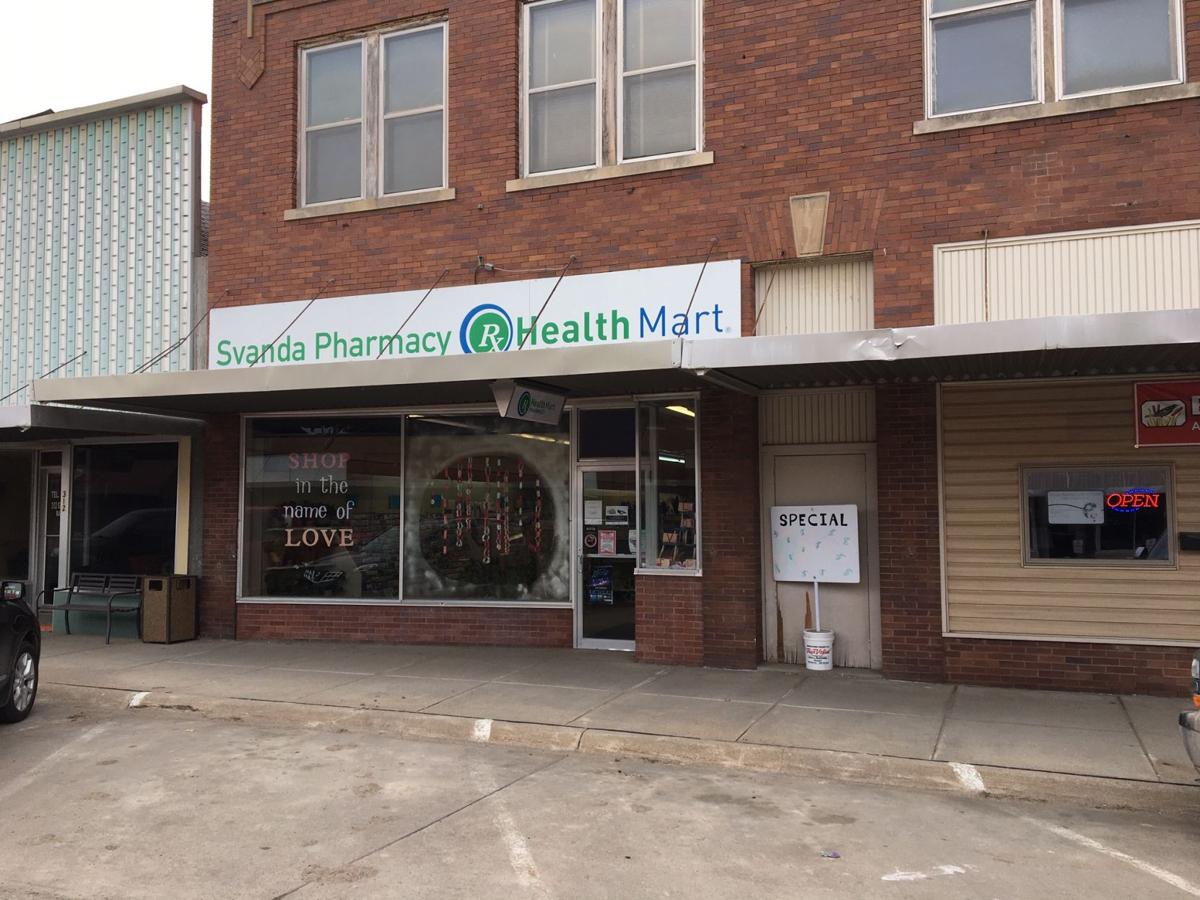 Svanda Pharmacy  was founded in 1944 by the Svanda family, who had owned and operated it for 69 years when Wright and Baillie purchased it in 2013. Baillie’s husband is a silent partner. 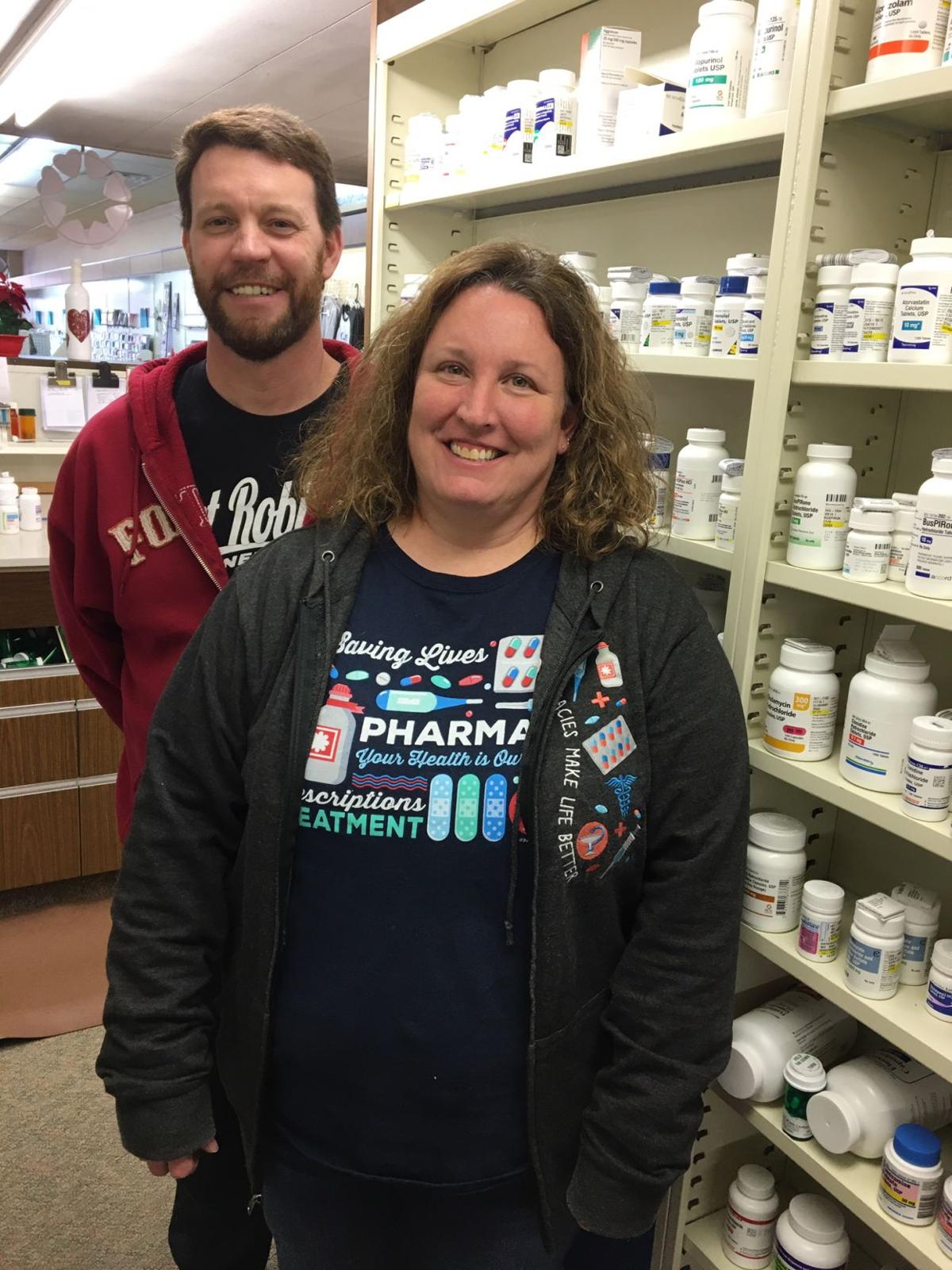 Geoff Wright and Stacy Baillie are siblings who own Svanda Pharmacy in Ravenna. Both are pharmacists who enjoy working in a small-town setting where they know their customers personally. 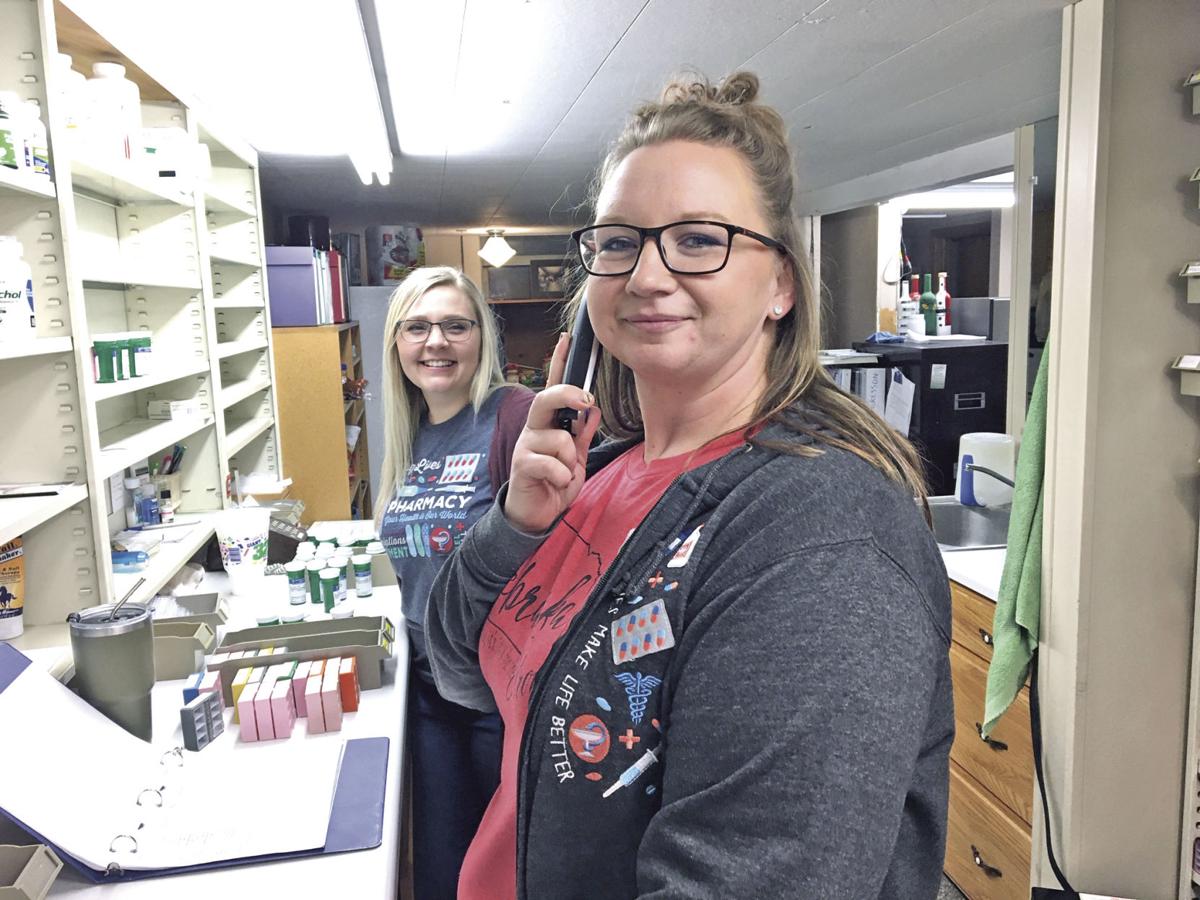 Shelby Habe, left, and Maggie Sekutera are both pharmacy technicians at Svanda Pharmacy. 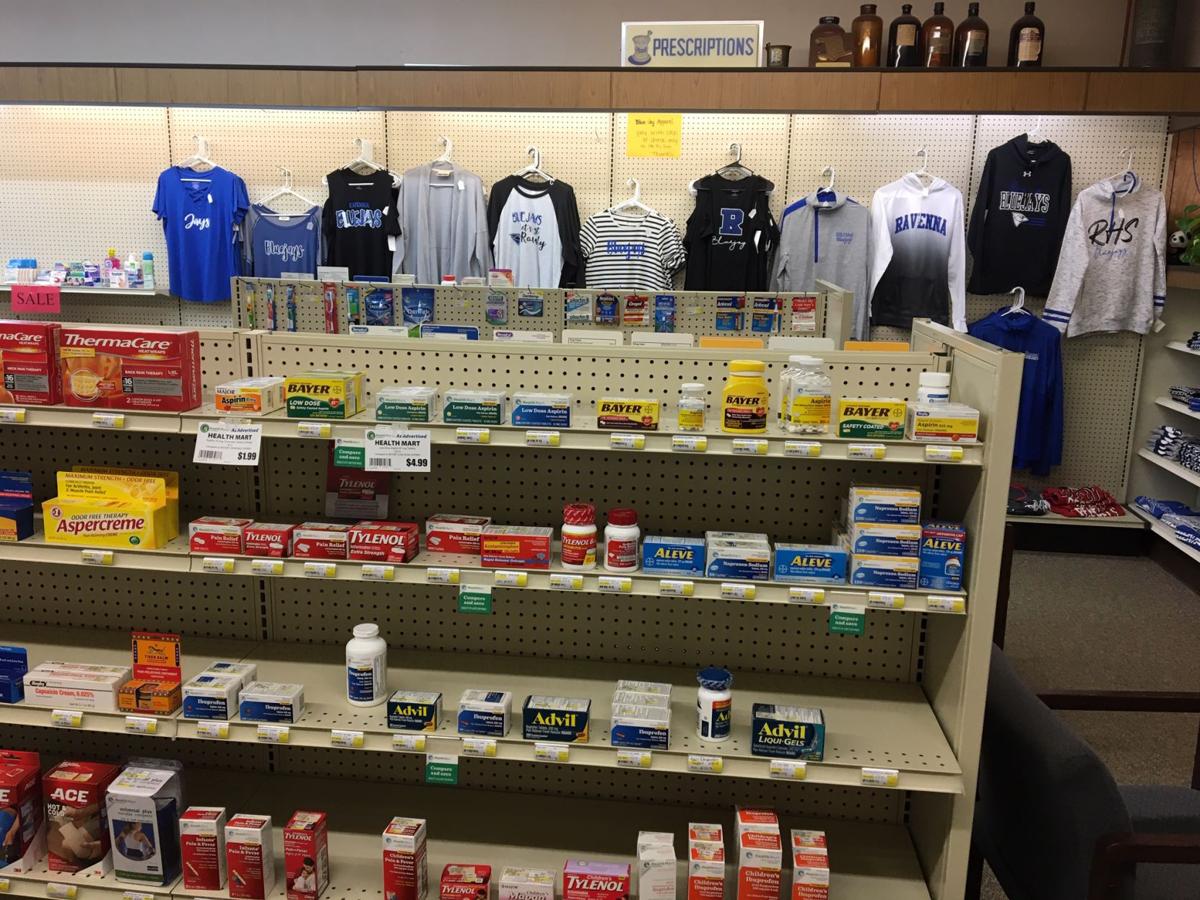 Svanda Pharmacy is located at 314 Grand Ave. in Ravenna. 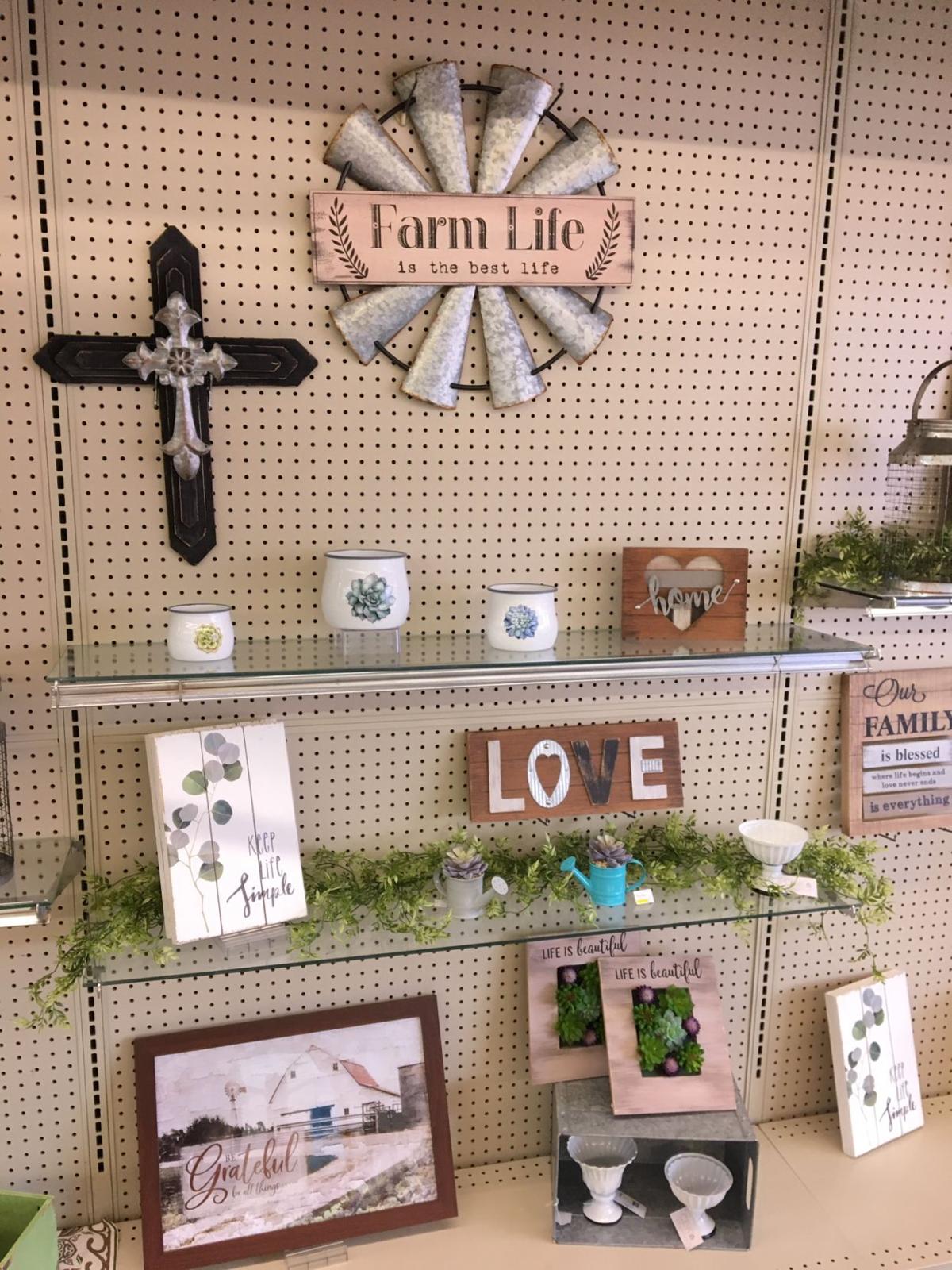 In addition to medication, Svanda Pharmacy sells a variety of other items, such as home decor. 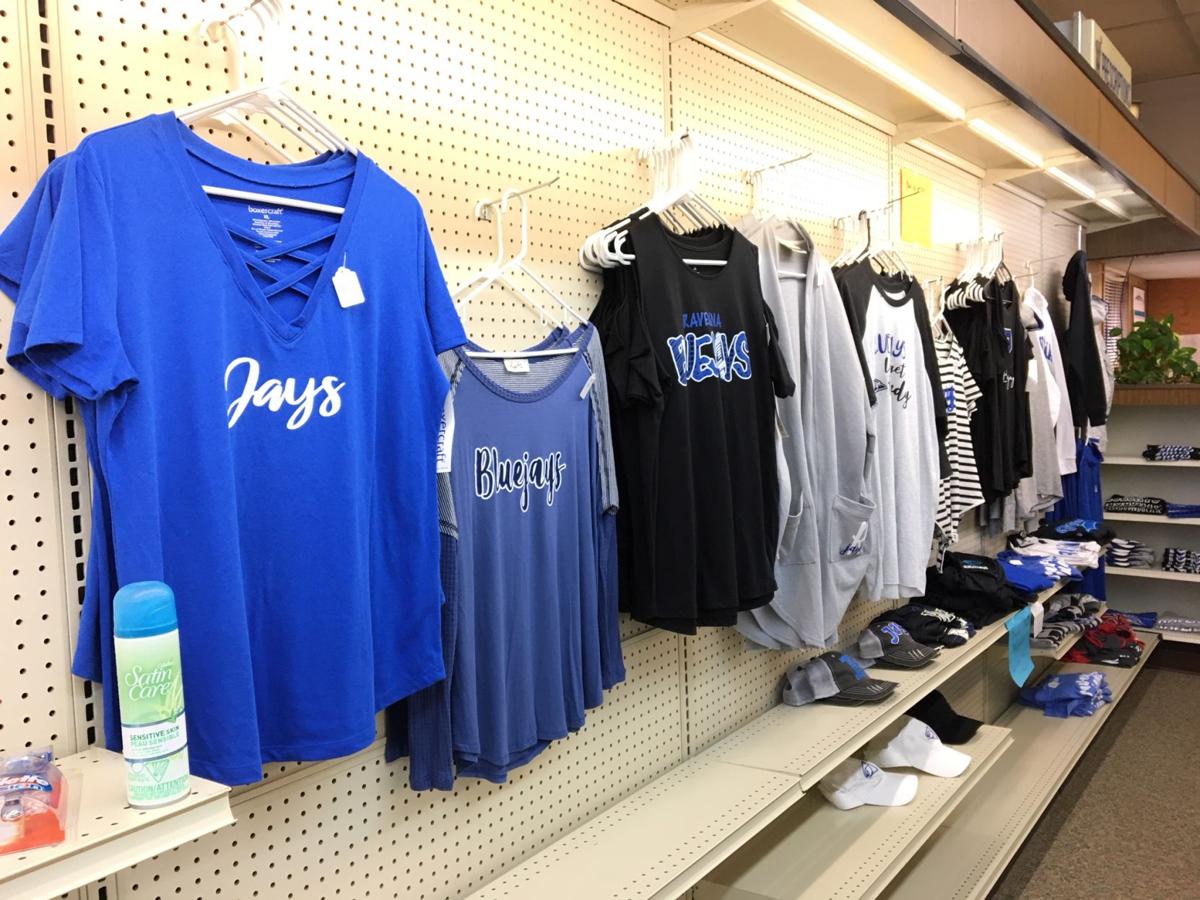 Svanda Pharmacy is also a place where you can buy Ravenna Bluejays spirit gear.

Svanda Pharmacy  was founded in 1944 by the Svanda family, who had owned and operated it for 69 years when Wright and Baillie purchased it in 2013. Baillie’s husband is a silent partner.

Geoff Wright and Stacy Baillie are siblings who own Svanda Pharmacy in Ravenna. Both are pharmacists who enjoy working in a small-town setting where they know their customers personally.

Shelby Habe, left, and Maggie Sekutera are both pharmacy technicians at Svanda Pharmacy.

Svanda Pharmacy is located at 314 Grand Ave. in Ravenna.

In addition to medication, Svanda Pharmacy sells a variety of other items, such as home decor.

Svanda Pharmacy is also a place where you can buy Ravenna Bluejays spirit gear.

RAVENNA — The T-shirt says it all.

The staff at Svanda Pharmacy wears black T-shirts sprinkled with adhesive bandages, colorful capsules and a slogan: “Your Health is Our World.”

They wear those T-shirts with easy smiles as they fill prescriptions, counsel customers and more, personifying the reason why Stacy Baillie and her brother Geoff Wright, both pharmacists, purchased Svanda Pharmacy at 314 Grand Ave. seven years ago.

“I’ve worked in a variety of places, but the idea of working in a place where we could get to know our patients appealed to us,” said Wright, the pharmacist-in-charge.

Svanda’s is more than just a drugstore. It’s a variety store, too. Along with aspirin, cough medicine and gauze, it sells blue and white Ravenna T-shirts, sweatshirts and tank tops. It offers country decor such as mugs, whimsical little angels, small pictures, wall hangings and greeting cards.

“We know our customers’ names. We have a lot more interaction with them than just passing medication over the counter,” Wright said.

The pharmacy was founded in 1944 by the Svanda family. They owned and operated it for 69 years. In 2013, Sheryl Perry, a Svanda family member and the daughter of a previous owner, put it up for sale.

Wright had never wanted to own a drugstore, but suddenly the idea intrigued him. He and Baillie purchased it. Baillie’s husband Rod, who works in IT for John Deere, is a silent partner.

Both Wright, 42, and Baillie, 46, grew up in Broken Bow. Their parents, Gary and Sandy, had met and taught at Broken Bow High School.

It was there, 30-plus years ago, that this venture took root.

When Baillie was in the eighth grade, she was hired to help restock shelves at Varney Health Mart while it was being remodeled. That temporary position became an after-school job. When she was in high school, she helped run the drugstore’s computers when one of the employees was on maternity leave.

After graduating from the University of Nebraska at Kearney, she went on to pharmacy school at the Nebraska Medicine Nebraska Medical Center in Omaha. “I liked the one-on-one patient interaction in pharmacy. You get to know your patients. You’re invested in it,” she said.

She earned her pharmacy degree in 1998 and returned to Broken Bow to work at Varney Health Mart, owned by Ran Varney. “Over and over he told me, ‘You can’t move away,’” she said, “He was a major influence on my life. I had other offers, but I went to work in Broken Bow. I felt like I was right where I wanted to be.”

Her brother, four years younger, “kind of tagged along to Varney’s when Stacy was working,” he said. He studied physical therapy at UNK, but his sister’s influence and the impact of a UNK organic chemistry professor left their mark. “He encouraged me,” Wright said. “So did she. It’s the ‘older sister influence.’”

After graduating from UNK, Wright went to pharmacy school, too. He saw opportunity, especially in areas of sports pharmacy.

Once he had his degree, Wright returned to central Nebraska and worked in hospitals, in retail and various institutions. But something was missing: a personal tie to the people he served.

When the Svanda Pharmacy opportunity came along, Wright got excited.

“Just the idea of a place where we’d know our patients intrigued me. We’d know their names,” he said.

He lived in Kearney at the time, but he and Baillie knew Ravenna because their mother Sandy had graduated from Ravenna High School, and they had family in the area. “We weren’t complete strangers coming to town,” Wright said.

When the siblings bought the drugstore, Baillie left Varney’s Health Mart, but she didn’t leave Broken Bow. She makes the 45-minute (“in good weather”) drive from Broken Bow to Ravenna three days a week. Wright lives in Ravenna just a few blocks from the store.

Both do “pretty much everything.” Their staff includes two certified pharmacy technicians, Shelby Habe and Maggie Sekutera, who have worked there three and five years, respectively.

They all wear Svanda’s Pharmacy T-shirts “so people who come in won’t be intimidated,” Baillie said. “People who come in here dress casually. We found that people in Ravenna only wear shirts and ties to funerals.”

They sell the Ravenna T-shirts for Brenda Beranek, who owns an apparel shop, Mr. B’s Tees, which moved not long ago from Grand Avenue to Highway 2. Selling them at Svanda’s gives her a market in the center of town, Wright said.

In recent months, they have reached out to the community. Since the Ravenna Medical Clinic closed in November, they’ve given 100 shots for flu, shingles and pneumonia. “When the clinic was open, we didn’t want to compete, but then it closed, so we started providing those shots,” Baillie said.

Wright regularly speaks about health issues to Ravenna seniors and at high school career days. He invites high school students who are curious about pharmacy to shadow him for a day.

Like every business, Svanda Pharmacy has faced challenges. One night Wright was home when he heard sirens blaring. He thought nothing of it until he got a phone call saying the pharmacy was on fire. Damage was limited to the back section of the store. A few years ago, a thief stole $10,000 worth of medications.

They’ve also been affected by the opening of Dollar General on Highway 2 just south of downtown late last year.

But the siblings have no regrets about purchasing the store. They love working in a less stressful small town, and working as partners.

“We can coordinate our vacation schedules. I can schedule my work hours around my daughter’s sports contests. You can’t always do that in a corporate situation,” Wright said.

The store, whose business card says “Caring for you and about you” is open only on weekdays.

“We used to be open on Saturdays, but that’s when people go to Kearney or Grand Island, so it wasn’t feasible for us to stay open,” Baillie said. “But for the most part, if people need to get ahold of us, that’s never a problem.”

Added Wright, “We want people to feel comfortable. We can accommodate almost anything.”