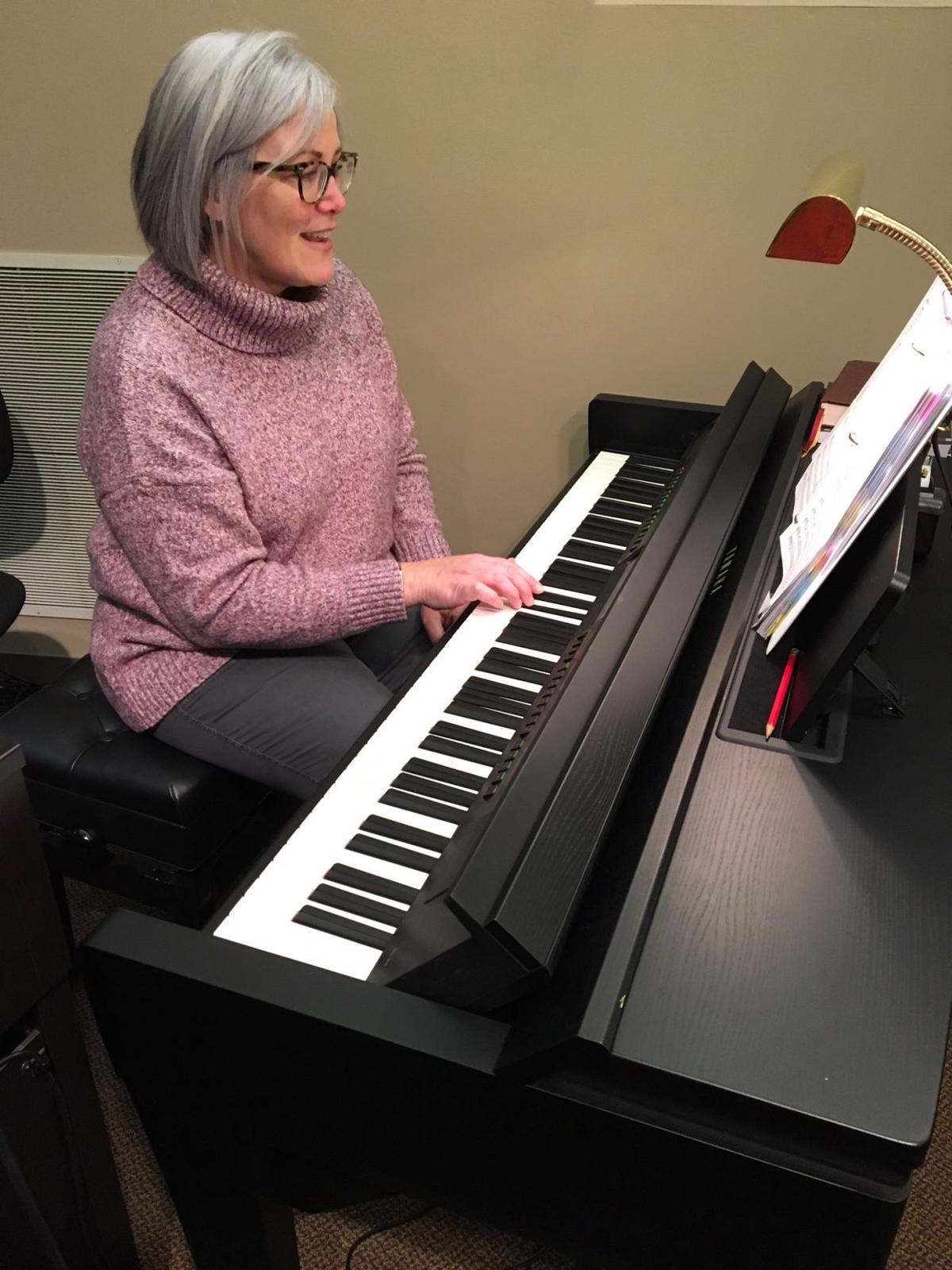 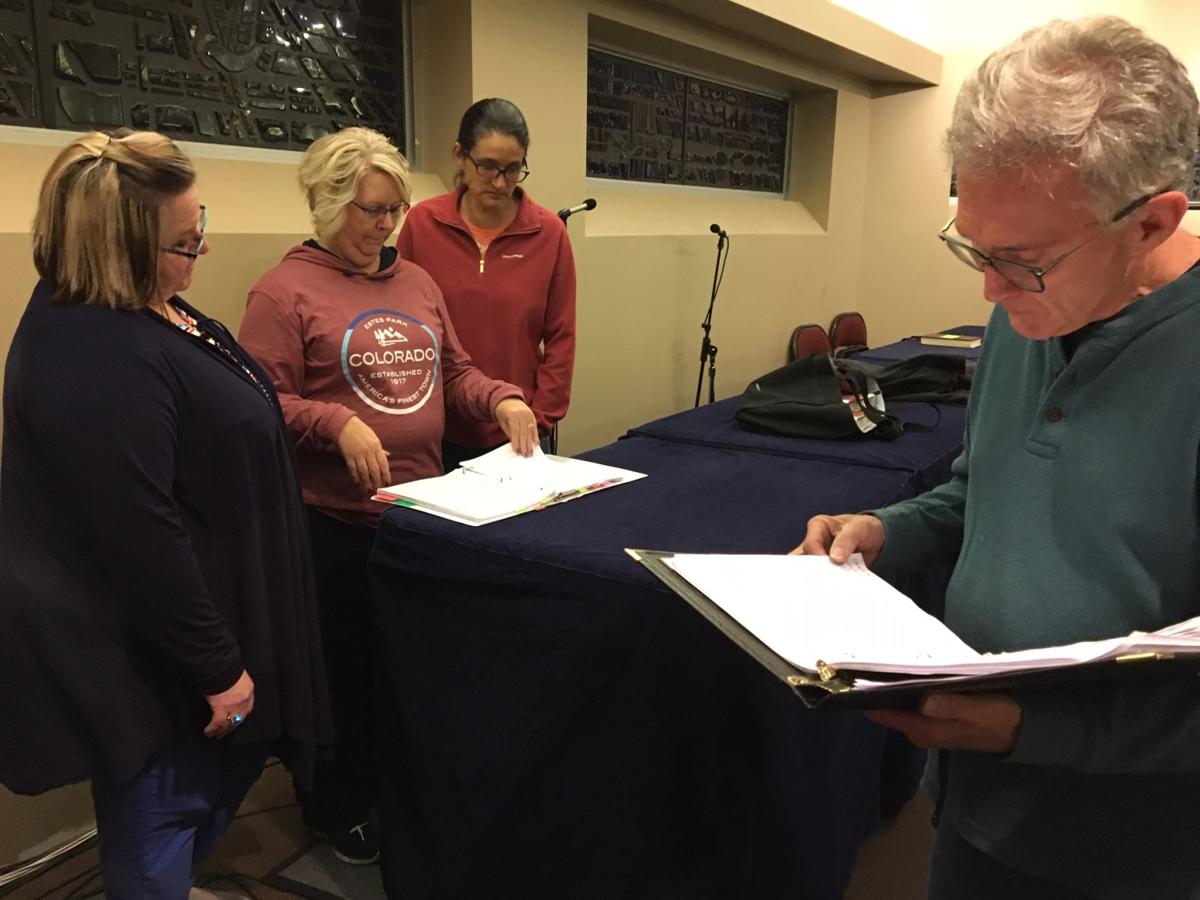 Hearts Alive, a select choral group, rehearses the cantata. From left are Michelle Widger, Tammy Hayden and Kristin Burbul. Gary Straatman is at the right. 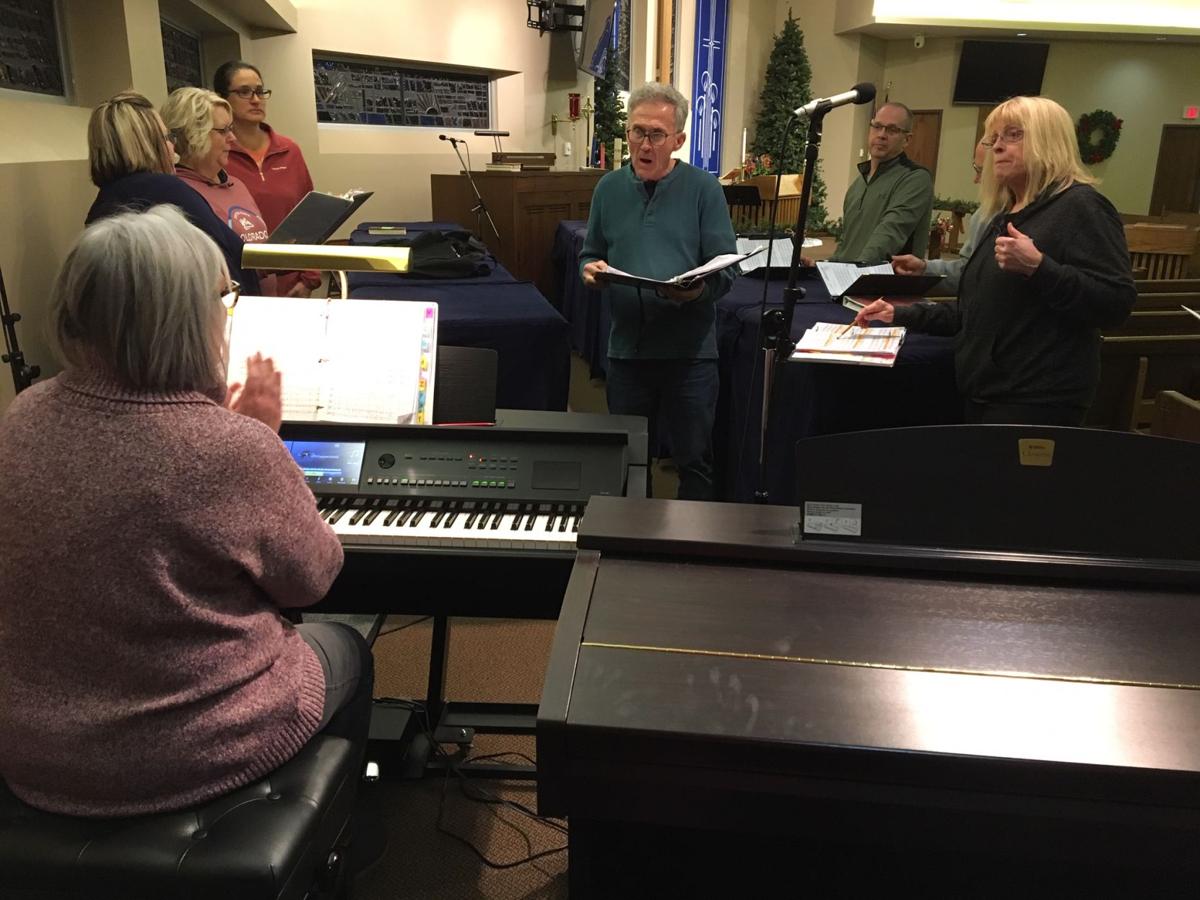 The Hearts Alive praise team had an evening practice in the sanctuary last week. Music director Jolene Berke (back to the camera) is at the piano. From left, singing, are a trio including Michelle Widger, Tammy Hayden and Kristin Burbul. Also pictured, in the center from left, are Gary Straatmann, Steve Kahle and Stephanie Straatmann.

Hearts Alive, a select choral group, rehearses the cantata. From left are Michelle Widger, Tammy Hayden and Kristin Burbul. Gary Straatman is at the right.

The Hearts Alive praise team had an evening practice in the sanctuary last week. Music director Jolene Berke (back to the camera) is at the piano. From left, singing, are a trio including Michelle Widger, Tammy Hayden and Kristin Burbul. Also pictured, in the center from left, are Gary Straatmann, Steve Kahle and Stephanie Straatmann.

KEARNEY — Ron Crocker downplays any fuss about “O Come Let Us Adore Him.”

It’s the first cantata the retired faculty member of the University of Nebraska at Kearney has ever written, but he wants no accolades.

The 40-minute cantata will premiere this weekend at Holy Cross Lutheran Church. Its 13 pieces include two compositions by Crocker, along with Appalachian folk hymns and arrangements of traditional Christmas carols such as “O Come All Ye Faithful” and “The First Noel.”

It will be performed by 50 adults, 120 youths and children, the church’s Hearts Alive praise team and 25 orchestra members.

Crocker composed a multitude of pieces for band and orchestras during his distinguished 45-plus-year career at UNK, but this one is different.

“This is a worship service,” he said humbly.

Jolene Berke, music director at Holy Cross, agreed, but with enthusiasm. “A local person wrote it. It’s intergenerational, with a full orchestra. We are doing it to celebrate the birth of Jesus and to glorify God, so yes, it’s a worship service.”

Last Christmas, her first as the Holy Cross music director, Berke directed what she called a “normal” Christmas cantata with choral groups and a full orchestra. But eighth graders struggled to play parts of the orchestration, so Berke rewrote some of it to make it easier for them. “I began to think, why don’t we do something designed for that level of talent?” she said.

She had an idea. Shortly after becoming the church music director in August 2018, she and Crocker had had a deep conversation.

“At that time, we talked about our dreams and visions for the Holy Cross music ministry,” Berke said. “Every church can have a choir, but we want everyone to be a participant. Music shouldn’t just be watching a group sing. Everyone should participate.”

Shortly after Christmas in 2018, she had another idea. She and Crocker conferred again.

She asked if he could write a Christmas cantata.

He liked the idea. Early this year, he got busy.

They met weekly to go over the composition. Berke also helped select the carols that are included. Crocker finished the cantata in August. “I also had 75 tomato plants to tend to,” he said.

Crocker not only wrote the cantata he built an antique rope drum for the Little Drummer Boy with the assistance of Jeff Sterling.

The congregation will participate as well. Berke expects the church, which can seat 450 people, to be full for each service.

Cantatas reach well beyond church boundaries, she said. In the past, people with no church affiliation have attended the Christmas performances at Holy Cross and been so inspired they have become active members of the church. For that reason, Berke considers such musical events as critical outreach.

Crocker grew up in Lincoln. “I was a failure at piano lessons, so I started drums in the fifth grade,” he said. He graduated from Nebraska Wesleyan University in 1964.

He taught high school music for a few years, then joined the UNK faculty as assistant director of bands and percussion specialist.

From 1994 to 2004, he chaired the UNK Department of Music and Performing Arts. By the time he retired from UNK in 2012, he was associate dean of the College of Fine Arts & Humanities. He also conducted the Kearney Symphony Orchestra for 13 years.

Crocker has been a guest clinician for more than 300 concert band, jazz band and percussion clinics and an adjudicator for hundreds of music contests.

He and Berke are considering making the cantata available to other churches, especially those with limited budgets. It can cost up to $1,000 or more to purchase a Christmas cantata and scores for choirs, Berke said. As for Crocker’s lifetime of accomplishments in music, “now is his time to give back,” she said.

The cantata “is not being done for glory or applause,” Berke said. “The focus will be on the manger.”

It will end not with triumphant music, but with a lone fifth grade girl kneeling at the manger.

“The focus will be on Him,” Crocker added.

There is no charge. Services last roughly one hour.