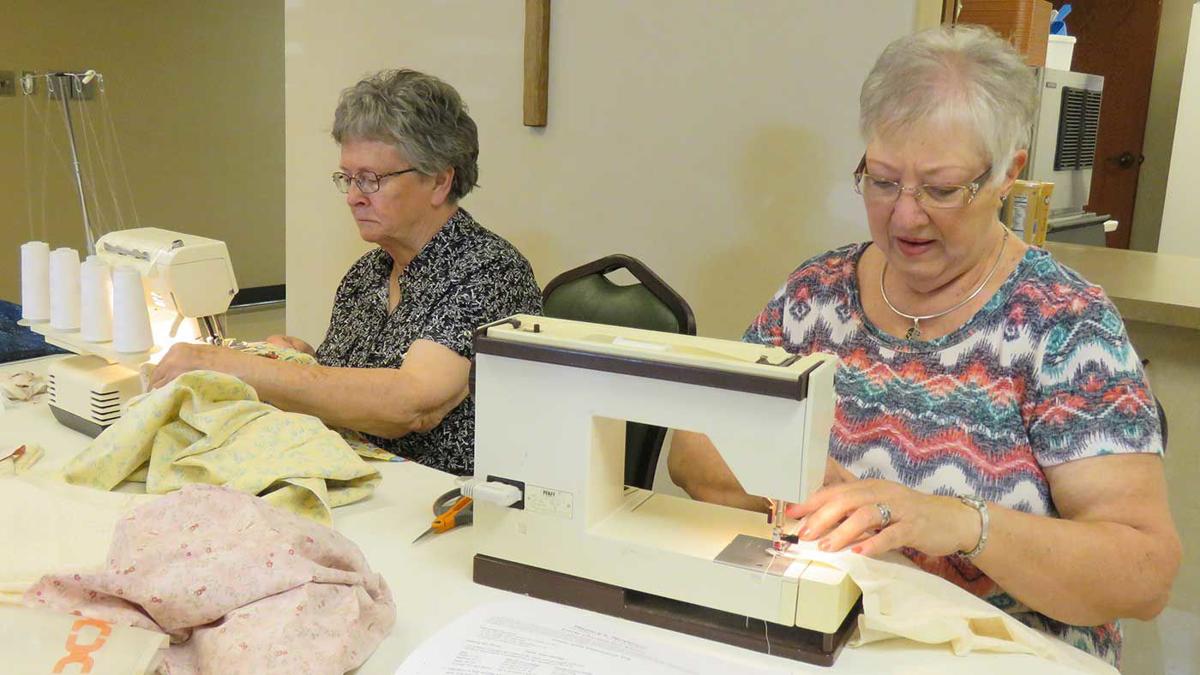 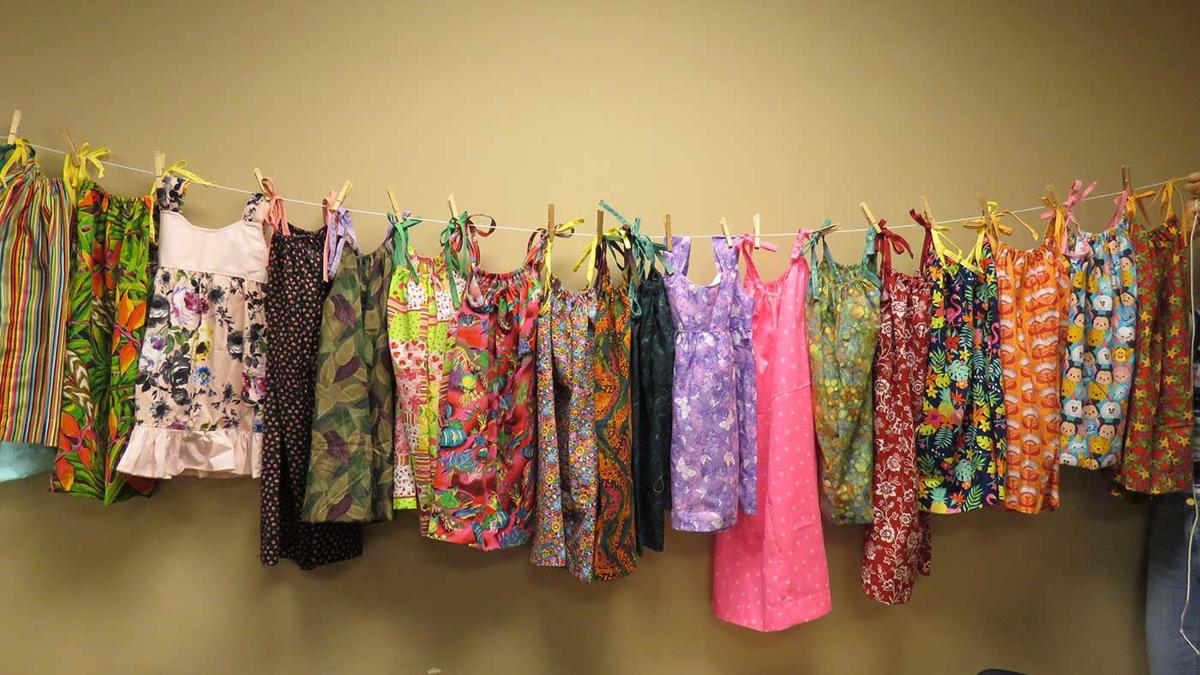 These colorful dresses were made for little girls in Haiti by women at Prince of Peace Catholic Church, Holy Rosary Church in Overton and Immaculate Conception Church in Elm Creek. 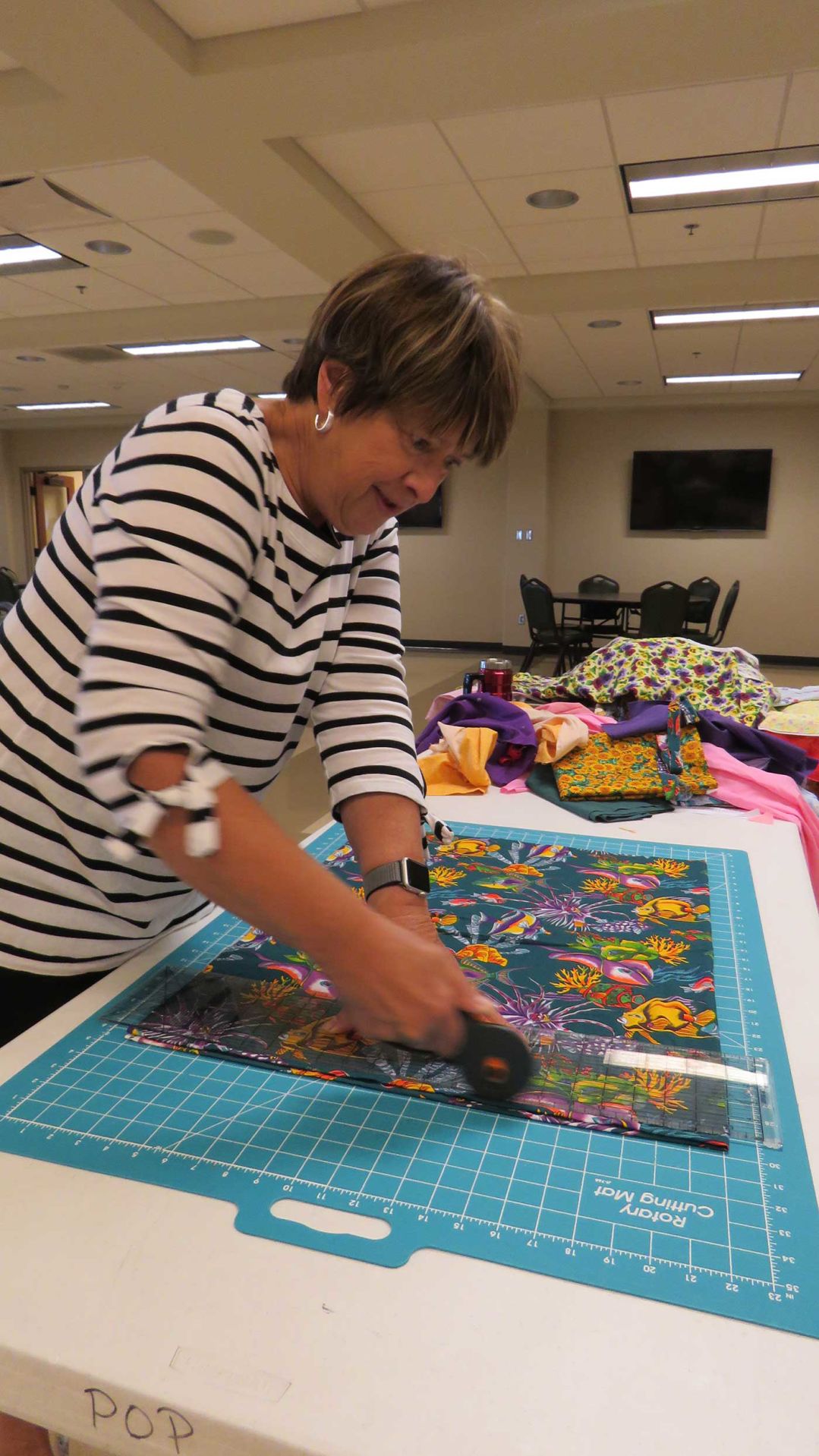 Nancy Stritt cuts fabric for the project. Fabric and other essentials were donated by church members. 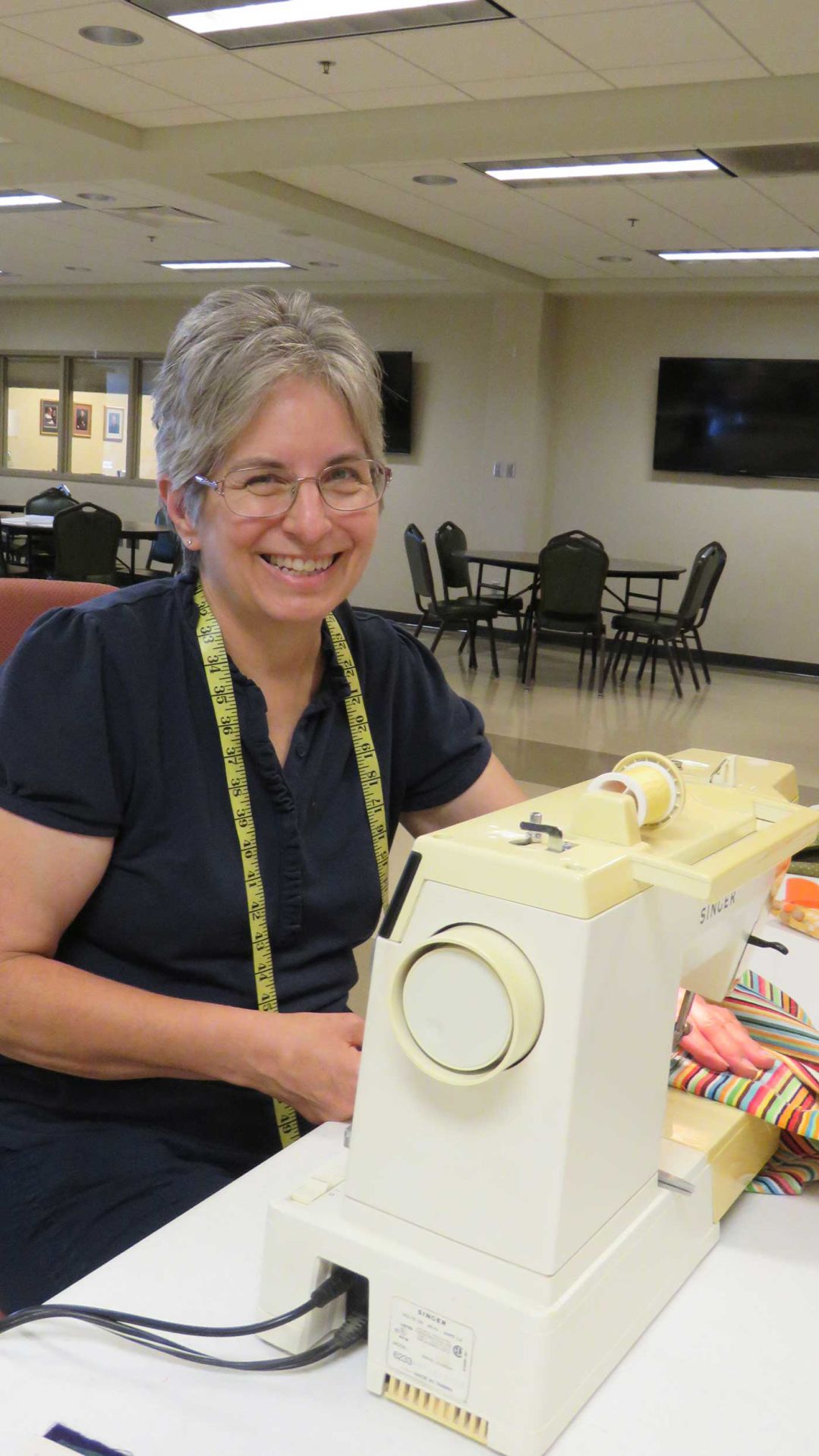 Denise Ourada was one of the 39 women who made 120 dresses and 10 pairs of shorts in three days. She is from Immaculate Conception Church in Elm Creek. 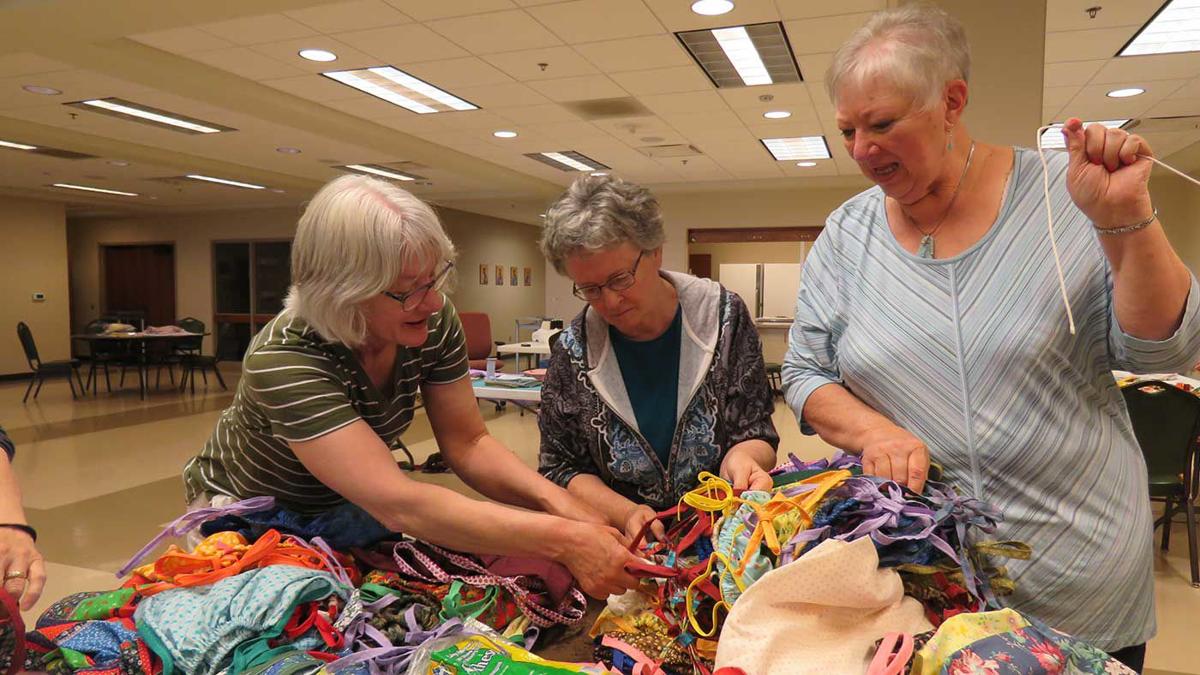 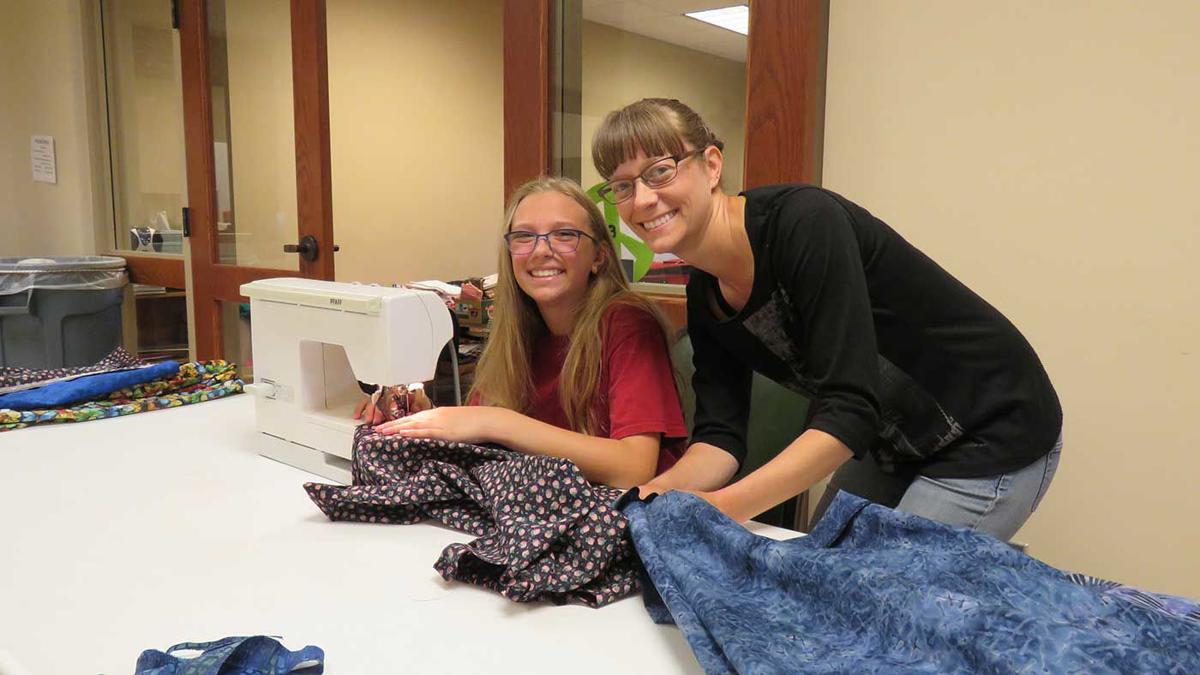 Lily Wheeler, a student at Kearney Catholic High School, and her mother, Susan Wheeler, were among three generations of one family who participated. Lily’s grandmother, Trish Wheeler, was there, too. She taught Lily to sew when Lily was a small child.

These colorful dresses were made for little girls in Haiti by women at Prince of Peace Catholic Church, Holy Rosary Church in Overton and Immaculate Conception Church in Elm Creek.

Nancy Stritt cuts fabric for the project. Fabric and other essentials were donated by church members.

Denise Ourada was one of the 39 women who made 120 dresses and 10 pairs of shorts in three days. She is from Immaculate Conception Church in Elm Creek.

Lily Wheeler, a student at Kearney Catholic High School, and her mother, Susan Wheeler, were among three generations of one family who participated. Lily’s grandmother, Trish Wheeler, was there, too. She taught Lily to sew when Lily was a small child.

This story has been updated to reflect there are 21 women total working on the Dresses for Haiti project.

For proof, she gazed happily at the colorful cotton dresses that hung on a clothesline at Prince of Peace Catholic Church this month.

At last, Schulte’s Dresses for Haiti project had come to fruition.

In three days this month, with more than a collective 195 hours, 18 women from Prince of Peace — along with three women from Holy Rosary Church in Overton and Immaculate Conception Church in Elm Creek — made 127 dresses and 10 pairs of shorts for rural children in Haiti that will allow them to go to school.

When the sewing began at 9 a.m. June 4, eight women showed up. Project hours were 9 a.m.-noon, 2-4 p.m. and 6-9 p.m. for three consecutive days. Women (and men) were invited to come when they could. Some picked up fabric at the church and sewed at home.

Schulte of Pleasanton worked, too, carefully feeding yellow and orange cotton under the needle of her sewing machine. ‘I’m shooting for at least 100 dresses in three days,” she said. “To be able to give a dress to a little girl, or make shorts for a little boy, for such little cost and effort, you open up their future through education.”

It took an average of 90 minutes to make one dress. By 2 p.m. that first afternoon, they had finished 45 dresses.

Schulte, who began sewing at 8, had wanted to make dresses for Third World children ever since she learned about the Little Dresses for Africa project at a National Council of Catholic Women convention 15 years ago.

Not long after that, Schulte learned that Bob Easton of Kearney spends up to 10 months a year with a project called Mission II Haiti, fixing water pumps in the northern part of Haiti. Mission II Haiti is supported in part by the Dawn Rotary Club. “I realized it would be so easy to work with Bob,” Schulte said.

She met Easton in a downtown parking lot to talk about the project. “She really got things rolling,” Easton said.

At the time, Schulte was the international chair for the Diocesan Council of Catholic Women, so she introduced the project at the DCCW Spring Assembly. Many parishes in the diocese eagerly adopted the project, but Prince of Peace did not because it had no CCW chapter.

Undeterred, Schulte stayed involved, championing the project elsewhere and delivering finished dresses from other parishes to Easton’s house so he could take them to Haiti.

Earlier this year, Schulte organized a Dresses for Haiti effort at her own at Prince of Peace. She spread the word and learned that 12 women were interested “so I just said we’d do it. This is one of my favorite projects.”

She set the dates for June 4-6. On June 5, Schulte made a dress at home using a pattern she found on the internet under Little Dresses for Africa — Nancy’s Notions. “It was easy,” she said.

The next morning, eight women arrived at Prince of Peace with their sewing machines, sat down at long tables in the social hall and began to sew. A few women who don’t sew showed up, too. They helped cut fabric and put elastic through casings. “We taught some of them how to use a sewing machine,” Schulte said. “If you know how to sew, you can do this.”

She paid nothing for the 200 yards of fabric, or for thread, seam binding, lace, ribbon and buttons. “Everything was donated,” Schulte said. “The people at Prince of Peace went into their closets and brought out fabric they’d never used. Other people went to stores and donated what we needed. Nancy Stritt made most of the seam binding. That saved us $1 on each dress.”

Easton has been taking dresses and shorts on his Haiti trips for six or seven years, ever since a woman from Loup City asked if he could take dresses made by her sewing group to that Caribbean nation.

“I take as many dresses as I can in my own suitcase, up to 50 pounds,” he said. He used to take an extra suitcase packed with nothing but dresses, but he stopped when the cost to check a bag leapt from $40 to $70.

Instead, he mails surplus dresses to Coconut Creek, Fla., where a ship called Food for the Poor delivers them to Haiti. The ecumenical Christian nonprofit organization includes food and medicine to the poor in Latin America and Caribbean nations.

Roger Hoffman, who oversees the Mission II Haiti project for the Dawn Rotary club, said that in the past year alone, more than 2,000 dresses made by CCW women in Nebraska have been distributed to Haiti. Women in Ravenna, especially, are prolific dress-makers, he said.

For Easton — whose sister Teresa Sorenson is a member of Prince of Peace and was among the seamstresses — the most moving part of the effort is giving the dresses away. When he goes to Haiti to fix water pumps, he drives through impoverished rural farms and towns, and if he sees children either poorly dressed, or not dressed at all, he stops unannounced, gets dresses and shorts from his vehicle and gives them to the children. “They’re delighted,” he said.

Schulte is, too. “This is something a parish can keep going. “Shipping is expensive, but as long as Bob can take them, he will,” she said.

She expects to have several more dress-making days at the parish this year and beyond. “I am overjoyed that we are now a part of the process,” Schulte said.