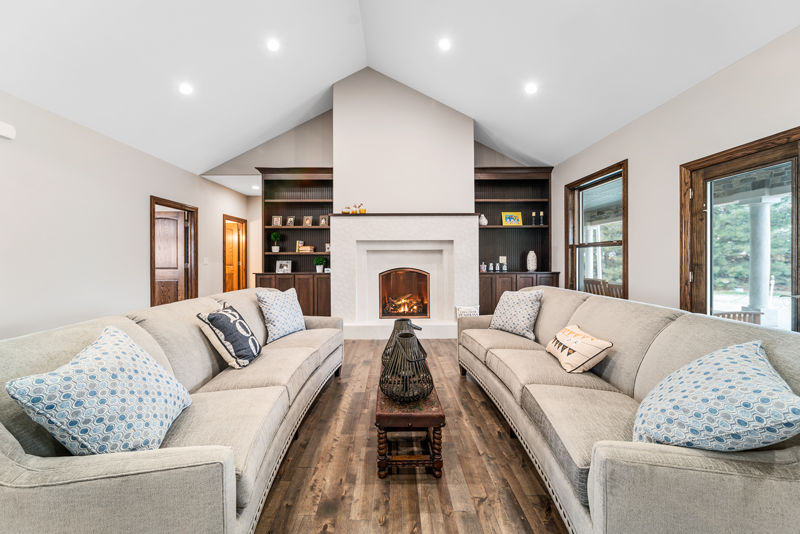 Brad and Laurie Farr’s home near Cambridge is bright and airy, and invites the outdoors to come inside. 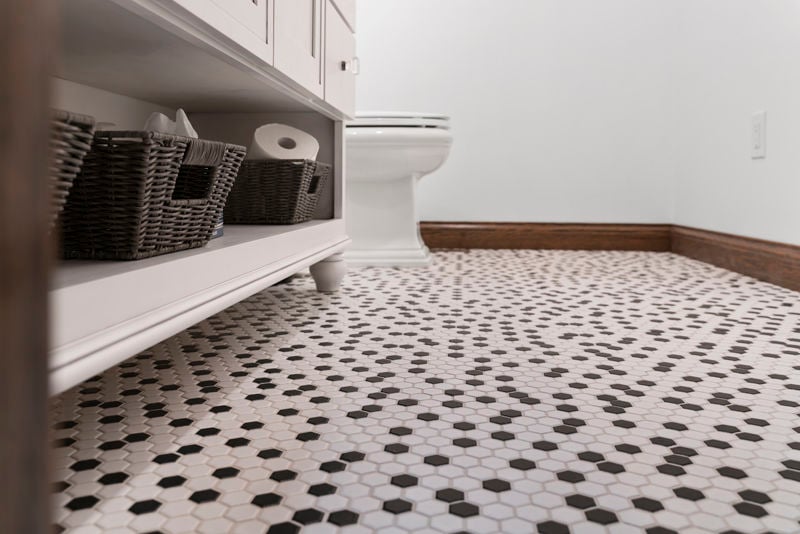 Small six-sided tile sets off the appearance of the half bath. 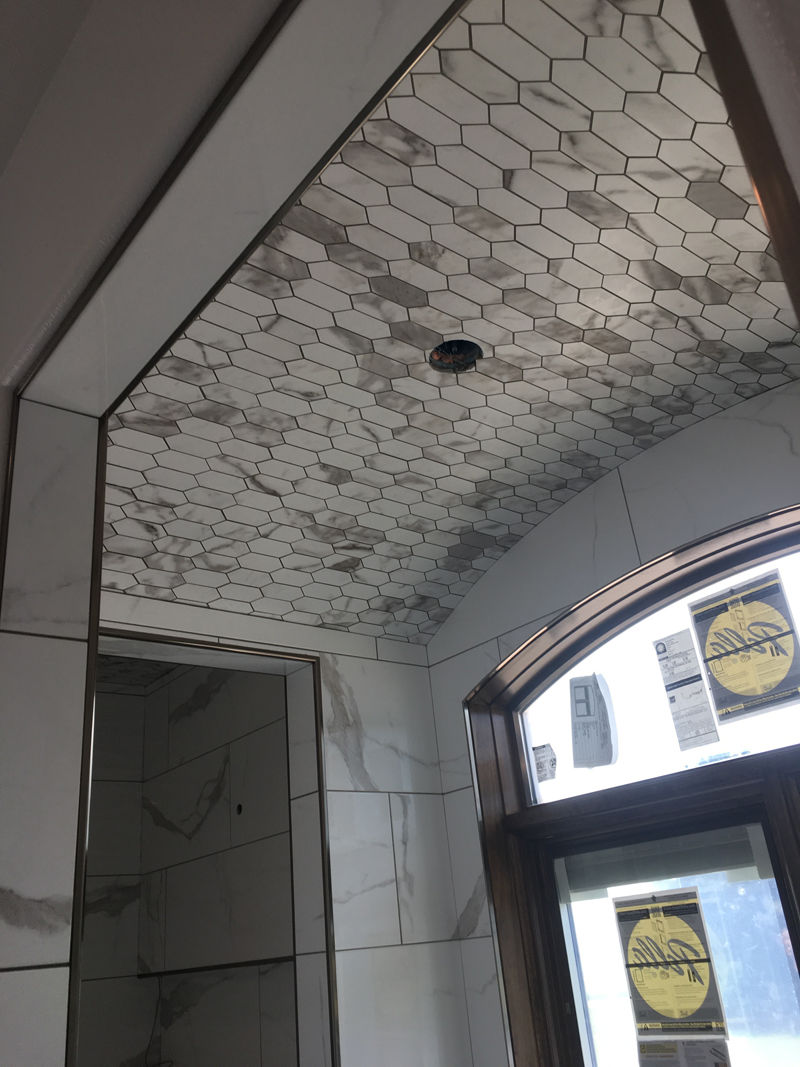 An arched ceiling matches the curve of a nearby window and ads visual appeal to the walk-in shower of the master suite.

Encircled in glass, a small sitting room provides a comfortable seat and wild creatures outside to observe.

Brad and Laurie Farr’s home near Cambridge is bright and airy, and invites the outdoors to come inside.

Small six-sided tile sets off the appearance of the half bath.

An arched ceiling matches the curve of a nearby window and ads visual appeal to the walk-in shower of the master suite.

Encircled in glass, a small sitting room provides a comfortable seat and wild creatures outside to observe.

CAMBRIDGE — Being a part of a new build near Cambridge was a wonderful opportunity in the careers of Kyle and Kay Babl, the brother and sister team at Babl Kitchen & Bath Inc.

The Kearney company that their father, Dan Babl, founded has a reputation for quality, craftsmanship and creativity. Luckily for the Babls, the project in Cambridge came with numerous opportunities for Kay and Kyle to display their talent in a home where flair for design and attention to details yielded a place that will be solid and attractive for decades to come.

“They went for unique, higher- end accommodations, things that are going to stand the test of time, and remain durable and attractive over the years,” said Kay Babl, describing the spare-no-expense approach of Brad and Laurie Farr. The couple moved into their dream home near Cambridge about six months ago.

At 6,200 square feet, the Farrs’ place is large, but the size doesn’t stand out as much as the thoughtful little touches that the Babls brought to the job.

Kay said it was a pleasure stretching her talents to high levels, with freedom to employ products, systems and ideas that go well beyond the everyday.

“This home was much more customized. We did some exciting things,” Kay said. The Farrs didn’t impose limits that compromised style and flair to achieve bottom-line results. As it was, the Farrs respected Kyle and Kay’s ideas, and today they are enjoying the results.

“Kyle has some fantastic ideas. They were fantastic ideas that were going to cost me money, but I went along,” said Laurie Farr, an Amherst native who spent her teaching career in Cambridge, population 1,100. Her husband owns Extreme Ag, a seed and ag chemical business that serves the Cambridge area.

The Farrs had heard good reviews from friends who had worked with Babl Kitchen & Bath, so they contacted the Kearney business to talk about their dream home.

“A lot of it was through word of mouth. That’s how we got hooked up with the Babls,” Laurie Farr said. “From the minute I started talking with Kay I knew we were going to be friends. I could tell by the look on her face if she knew what I was thinking.”

Distance was among the challenges for the project in Cambridge. It’s almost a 90-minute drive southwest from Kearney. Another challenge was landing a general contractor, but the Farrs took a creative tack on that challenge. They hired a former contractor from Colorado, Jason Cobb, who had moved to Nebraska for a job at the ethanol plant in Cambridge. With Cobb leading the charge, employees of Brad’s Extreme Ag business moonlighted as construction workers and tackled much of the work.

“It was like an old-fashioned barn raising,” Laurie said about framing the house.

Kyle Babl spent almost six months on the Farr project. During much of that time he focused on his specialty, tile installation, but he also had other responsibilities.

“Kyle had a significant part in the job because sometimes in a small town there aren’t people with the time or who are able to do the things that certain customers want,” said Kay. “Kyle runs our labor crews and does a lot of the scheduling for the installs.”

Kyle said he enjoyed tiling the large walk-in shower in the Farrs’ master bath. There’s an arched ceiling to prevent condensation dripping in the dry-off area.

The shower in the guest bath features a zero-entry, meaning there’s no step up or down to enter the shower. Shower water drains into a shallow sloped pan built into the floor. The design requires meticulous water proofing and tile installation, but with Kyle’s experience, the result is a worry-free shower for years to come.

“I do my best. It’s just the artistry of it,” Kyle said about the satisfaction in his tile work.

The Farr house stands atop a hill near Cambridge. It’s the place of Brad’s boyhood home. The 2,000-square-foot house he grew up in was going to be bulldozed to make way for the new house, but a buyer moved the old house to a new location in Edison, Laurie said.

Her and Brad’s new home has a main floor and basement, with a bonus room over the garage. The main floor revolves around an open-concept great room with a vaulted ceiling and large fireplace that also employed Kyle’s talents with tile.

The kitchen isn’t large, but with an island and plenty of counter space, it easily accommodated the potluck Christmas dinner that attracted 37 relatives.

Adjoining the great room is a four-season room that’s glazed on three walls so, no matter what time of year it is, Laurie and Brad can feel as if they’re in the great outdoors. They liked the idea of the four-season room so much that there is a smaller one attached to the master suite.

The basement is a gathering place for parties and football. Laurie’s nephew is building an oversize table for the TV room. The table will be tall so people can stand around it, and there will be a pair of televisions on facing walls so nobody will miss a touchdown.

The Farr house has four bedrooms, 3½ baths and an attached two-car garage.

Babl did the pantry, kitchen, laundry room, master bath, half bath, guest bath, bar, and basement bathroom, Kay said, along with tile and wood products for the main floor and basement, and tile and installs in the four-season rooms.

The home’s exterior has a gray/brown stucco appearance with cream trim. There’s a large patio that soon will have a hot tub. The Farrs plan to put in a garden and plant their lawn in buffalo grass.

Kay said the place definitely is “one of the most fantastic homes I’ve worked on. It’s always nice to do awesome things for an awesome family. We feel very blessed the Farrs chose us to play a role in their dream home.”

Laurie said she and her husband are pleased with the results. “We’re both very happy with how it turned out.”