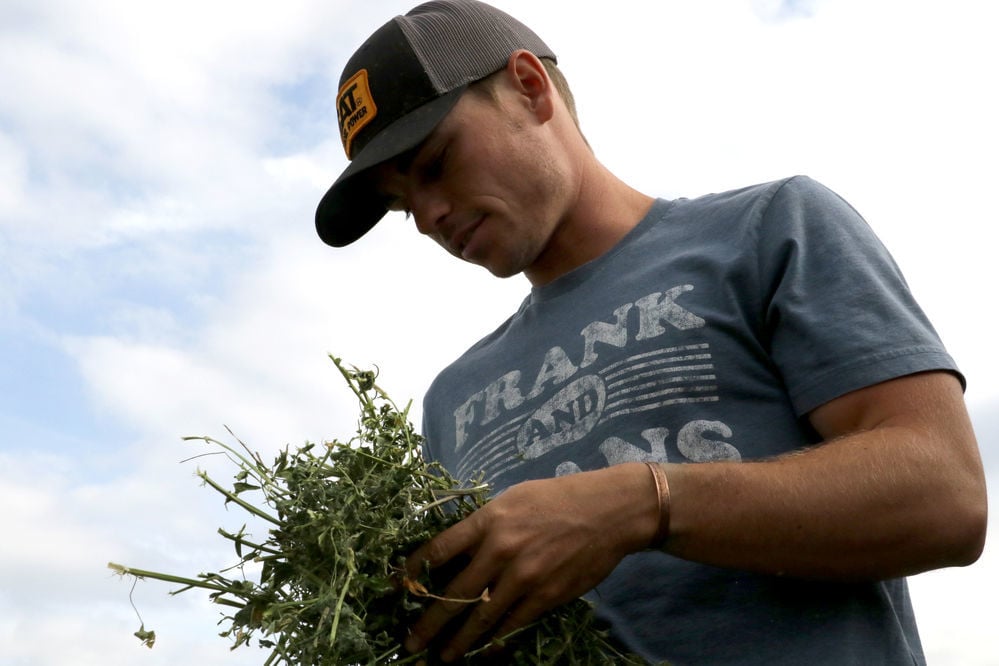 Chastin Hill assess first cutting alfalfa in Torrington early in the haying season. Options for organic producers include alfalfa, among a number of other commodities grown in the panhandle. 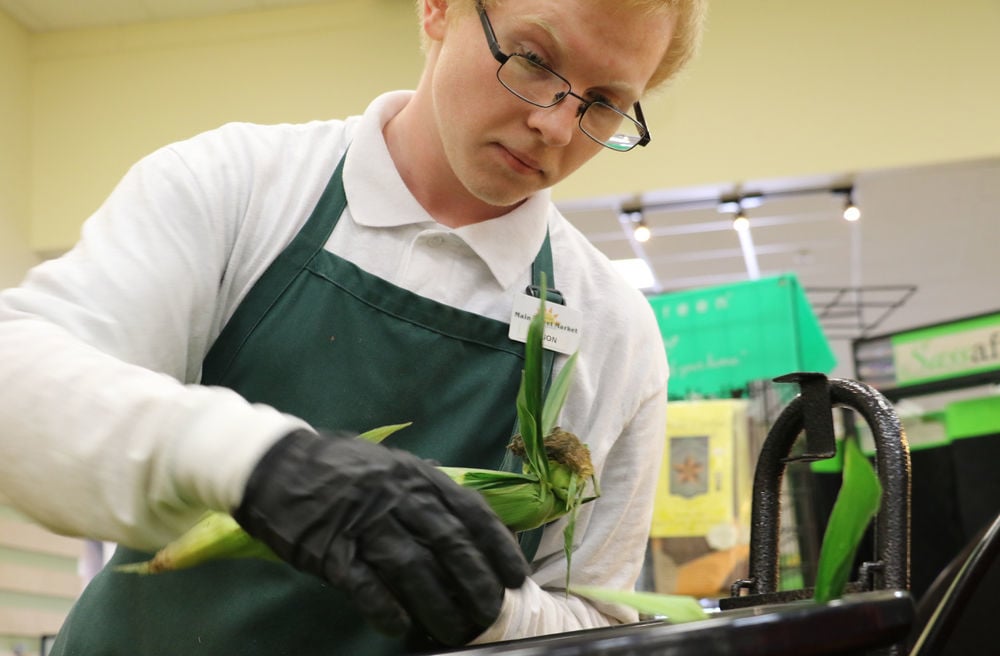 Main Street Market employee, Dillon Hanks stocks the produce section with corn. Certified organic produce and food items, grown by a large number of producers across the nation can be found throughout grocery store shelves. 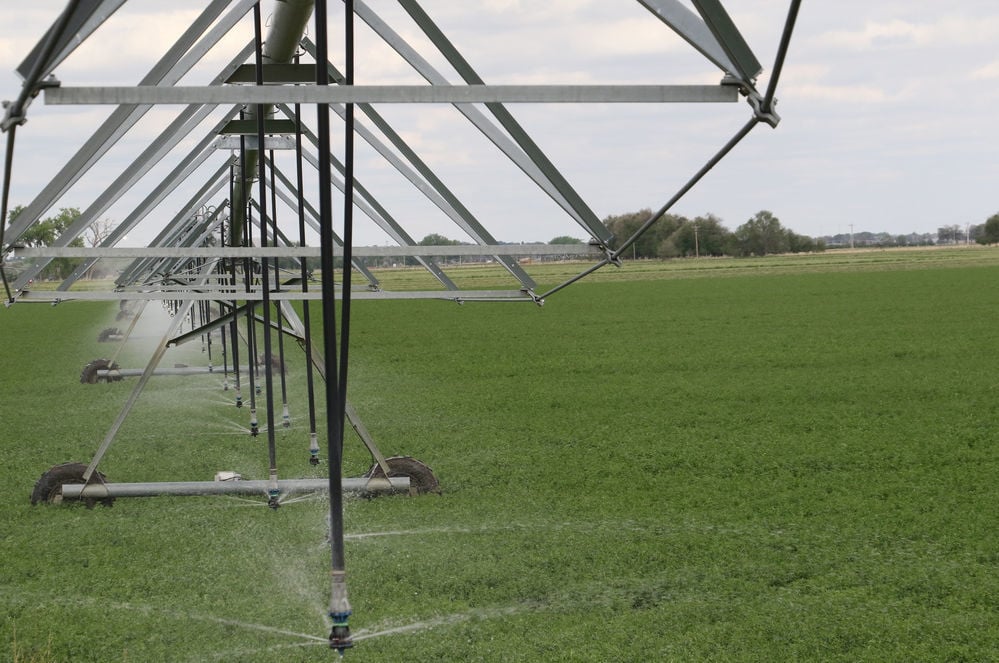 Options for organic producers include alfalfa, among a number of other commodities grown in the panhandle.

Chastin Hill assess first cutting alfalfa in Torrington early in the haying season. Options for organic producers include alfalfa, among a number of other commodities grown in the panhandle.

Main Street Market employee, Dillon Hanks stocks the produce section with corn. Certified organic produce and food items, grown by a large number of producers across the nation can be found throughout grocery store shelves.

Options for organic producers include alfalfa, among a number of other commodities grown in the panhandle.

“We do receive more phone calls about interest in certifying when markets are low,” Angie Tunink marketing director at Organic Crop Improvement Association (OCIA), said. “We (OCIA) have seen steady growth in certification numbers for approximately the last six years.”

While a number of conventional producers, have gained interest in organic practices during market fluctuation, Tunink confirmed the process is far from immediate as it takes a total of 36 months of strict record keeping for a producer to become certified.

“Recently on March 11th with corn and soybean prices unstable and prices around $3.60 - $3.70/bu for corn and $8.20 - $8.50/bu for soybeans in the region for conventional crops, prices for organic corn on this date averaged $8.18/bu and organic soybeans averaged $19.42 over twice the price of conventional crops,” Lesoing said, “With this kind of potential for a large premium for organic grains, we held a workshop in January for farmers interested in transitioning to organic farming.”

The workshop held by Lesoing and the University of Nebraska, had over 110 individuals attend the event, resulting in having to place a cap on participation due to high numbers, Lesoing said, who attributes the rise of interest in organic production to specific periods of time when conventional commodity markets have faced declines, such as the recent months.

“There is a lot of interest in organic farming when we have low commodity prices,” Lesoing said.

As sustainable agriculture has been emphasized more in recent years, Lesoing said, an interest in organic production is not always market based and can also be attributed to an emphasis of soil and agro-ecological health.

In terms of yield numbers, Lesoing said, yield values may be down due to organic restrictions, but protein values may be higher, therefore paying off rather in terms of quality and not quantity.

Lesoing said, as an example, if a conventional crop yields are 8% protein vs. organic yields at 11% protein, it can prove to be sustainable due to the content values and not the yield numbers.

“We have more people overall that are environmentally conscious,” Lesoing said, “Some producers have changed their practices become of things like providing clean water for the next generation, and trying to reduce pollution and increase sustainability.”

Due to organic restrictions, certified producers have turned to methods which return nutrients and mineral values to the soil, without using synthetic inputs (pesticides and synthetic fertilizers) through using cover crops and crop rotation methods.

“While organic farmers cannot use synthetic fertilizers and pesticides on their farms, it has evolved to be much more complex now and the organic farmer has several tools and products they can use for crop production,” Lesoing said.

Research in regard to microorganisms, nutrient values and technology such as different tillage methods and weed flamers which use propane to burn and kill weed, all have allowed organic producers to turn to regulate weeds and pets more efficiently without using synthetic inputs, Lesoing said.

“Sometimes manual labor may be higher for organic farmers, but they won’t experience as high input costs with organic either,” Tunink said.

Not only are certified organic producers the only ones who turn to recommended organic practices, but also conventional producers who are aiming to reduce their inputs, such as water, chemicals and fertilizer costs.

“Some people may not be certified but still follow those organic practices, because they can reduce their inputs,” Lesoing said. “Do things to improve inputs even though yield may not be the most important but they can use less water and chemicals. Less inputs they may not have to spend as much in the production phase.”

Due to the fact, certified organic production must meet a list of regulation requirements, and continue to meet those standards throughout all phases of production a number of questions are consistently raised, the reasoning behind workshops put together by Lesoing and the extension service. Lesoing said, he believes organic agriculture will only continue to grow over time, due to producers and the public increasingly keep health risks in mind.

“Probably the biggest questions about the conversion from conventional to organic crop production are: “How do you control weeds? How do you provide enough fertility so the crops can produce acceptable yields? and How do you market your crop to receive the organic premium?” These are three major questions that need to be addressed if you are going to be successful farming organically,” Lesoing said.

Lesoing encourages producers interested in organic production to refer to resources put together by SARE and reach out to organizations such as, OCIA, a non-profit farmer owned and farmer-led organization.

“Today, OCIA is an industry leader and one of the world’s largest organic certification agencies. OCIA has thousands of members in North, Central and South America, Africa, Europe and the Pacific Rim. These organizations assist farmers with the process of transitioning from conventional farming to organic farming. Probably one of the biggest requirements in organic farming is the record keeping required and a farm plan if you want to become certified,” Lesoing said.