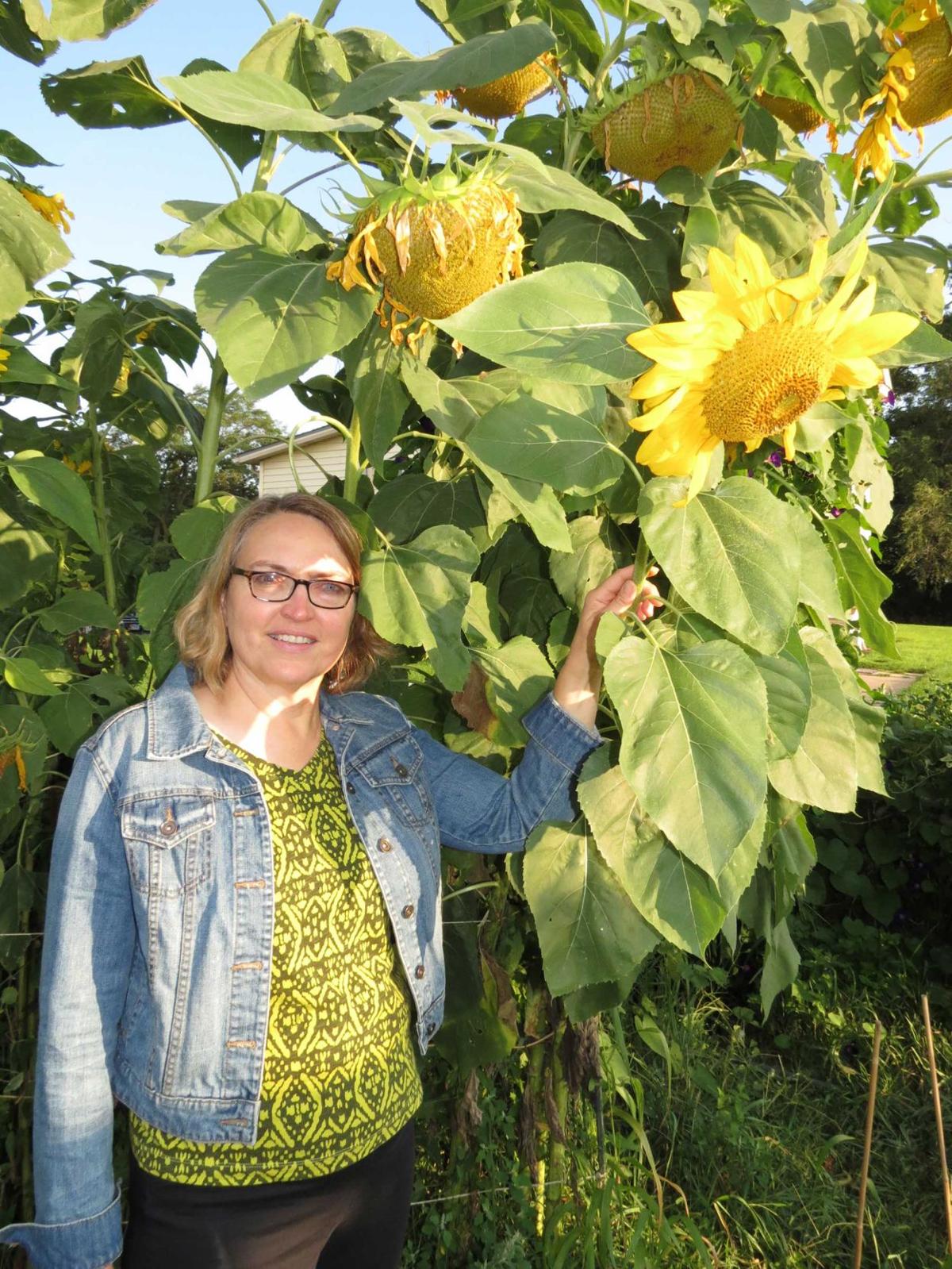 Ronnie O’Brien is resting her farm garden south of Shelton from corn production this year, but does have Arikara sunflowers and Pawnee spotted-like-a-horse beans. She is growing Pawnee white flour corn at Central Community College in Hastings where she teaches hospitality and hotel management courses. 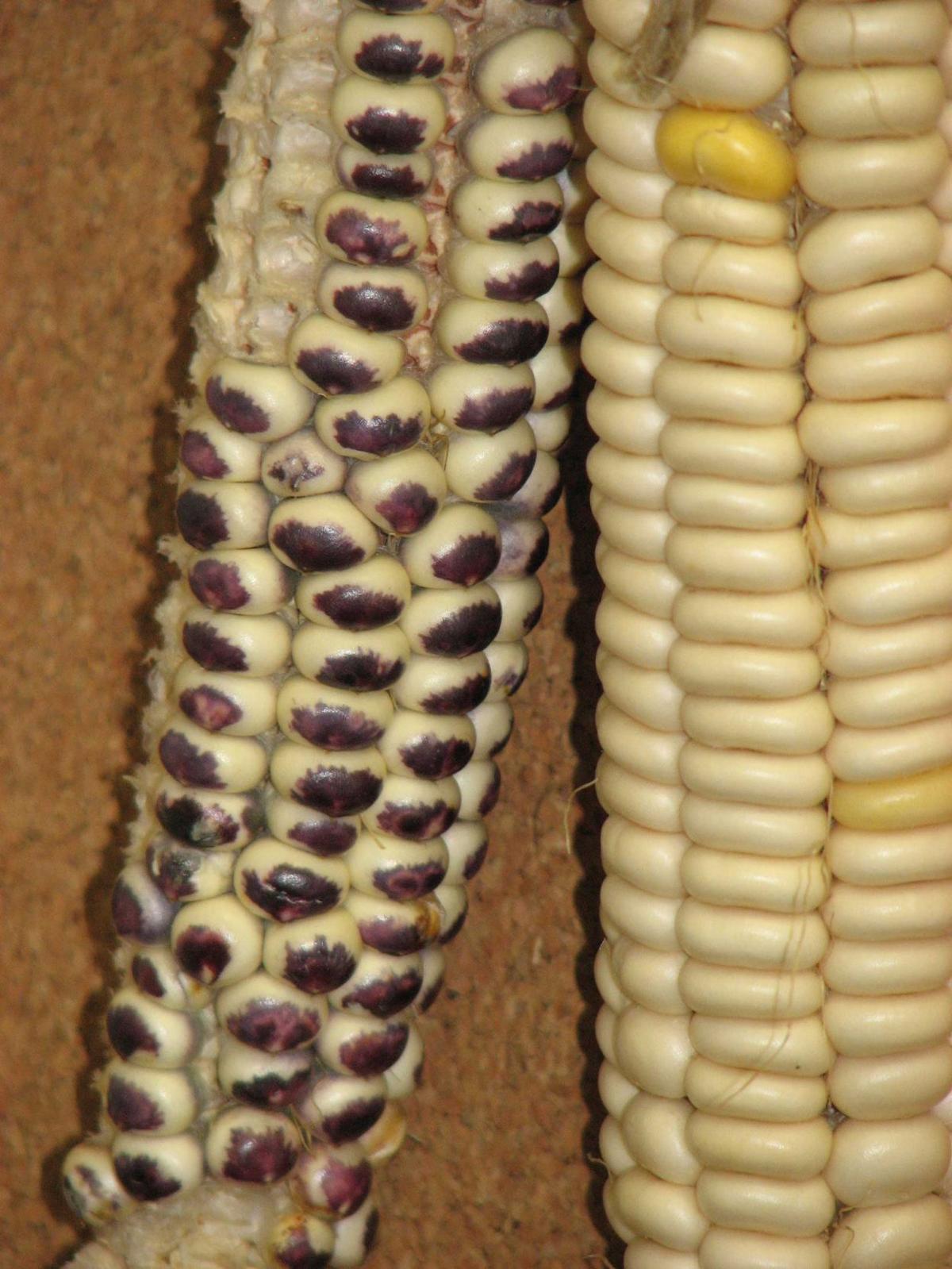 The initial focus for a Pawnee Nation-Nebraska gardeners partnership was to save the most sacred variety of Pawnee corn, eagle corn. Its name comes from the purple splotches that resemble eagle wings.

Ronnie O’Brien is resting her farm garden south of Shelton from corn production this year, but does have Arikara sunflowers and Pawnee spotted-like-a-horse beans. She is growing Pawnee white flour corn at Central Community College in Hastings where she teaches hospitality and hotel management courses.

The initial focus for a Pawnee Nation-Nebraska gardeners partnership was to save the most sacred variety of Pawnee corn, eagle corn. Its name comes from the purple splotches that resemble eagle wings.

SHELTON — Seed sisters Ronnie O’Brien and Deb Echo-Hawk can barely contain their joy when they talk about progress made by Oklahoma and Nebraska gardeners to restore the Pawnee corn seed bank and develop a sustainable corn-growing system.

The effort began in 2003 when O’Brien of rural Shelton, who then was The Archway’s cultural education director, wanted to plant a garden with corn and other crops that had been cultivated by the Pawnee people before they were forced by the U.S. Government in the 1870s to move from their Nebraska homeland to Oklahoma.

O’Brien learned from Pawnee Keeper of the Seeds Echo-Hawk that there were precious few corn seeds left, even for the most sacred variety, eagle corn.

Pawnee elders entrusted seeds for eagle corn and other varieties to O’Brien and a small group of master gardeners in the hope that the seeds would thrive in their native Nebraska soil.

“We’re looking at having a fall feast this fall. That’s a first. We’re halfway there,” Echo-Hawk said about having the eagle corn needed for 400 people. “We hope the (additional) planted corn will get us over.”

It is up to the chiefs to decide where and when the fall feast will be, she added.

Blue flour corn is another success story. It is being grown this summer in Oklahoma and also in Nebraska fields near Arcadia, Amherst, Gibbon, Central City and Pleasant Dale.

“We’re using that (blue corn) mainly to feed our elders and at special events. We found a really good recipe for cornbread,” Echo-Hawk told the Hub and O’Brien during a recent video chat from O’Brien’s farm kitchen.

Echo-Hawk said they make a blue corn mush for fragile homebound and hospitalized Pawnee. Many elders believe in the healing power of the corn, she added.

“Traditional foods are more than healthy foods,” Echo-Hawk said, because they are a strong link to the Pawnee culture, history and heritage passed from generation to generation.

Dawna Ourada of Kearney, one of the Nebraska growers, said Pawnee corn has different carbs than modern corn, plus more fiber and protein, especially blue corn. That means it is more than culturally important for the Pawnee people, it’s a good nutrition choice.

Ourada acknowledged that Nebraska gardeners do feel stress in knowing they are growing such important crops, including some that are nearly extinct. That makes it hard to deliberately stress the precious plants “when Ronnie says not to water it, but it looks so dry,” she said.

The gardeners’ reward is knowing they are making a difference for the Pawnee people.

O’Brien said it’s important to preserve what the Nebraska and Oklahoma growers have learned the past 14 years so the next generation of Pawnee corn growers don’t have to start over.

Echo-Hawk is pleased to see more volunteers helping in the Oklahoma gardens. “It’s a really wonderful thing. The other day a mom called me to say her son was one of the 16 people who went to the garden to volunteer, and he was begging to go back,” she said.

Echo-Hawk added that the Pawnee chiefs plan to select more seed keepers — three from each of four bands — this winter, who will learn to grow corn and also learn the songs, history and heritage behind it.

“To me, this project is no longer pie in the sky. We’re there,” O’Brien said, for most of corn varieties and other Pawnee and Arikara crops, including sunflowers, squash, melons and dry beans.

“The word you hear over and over is sustainability,” Echo-Hawk said, adding that the Pawnee people are working on their first farming and ranching plan.

“Honestly, they’re trying to keep up with Ronnie and me. I tell them the seeds won’t wait,” Echo-Hawk said. “We’re ready for the bigger gardens and (deciding) how are we going to do that.”

Tan kernels on white flour ear may be long-lost Pawnee corn; crops on way to Oklahoma

KEARNEY — A few tan kernels on a tiny ear of white flour corn may be another sign of history reaching out to the Pawnee Nation.