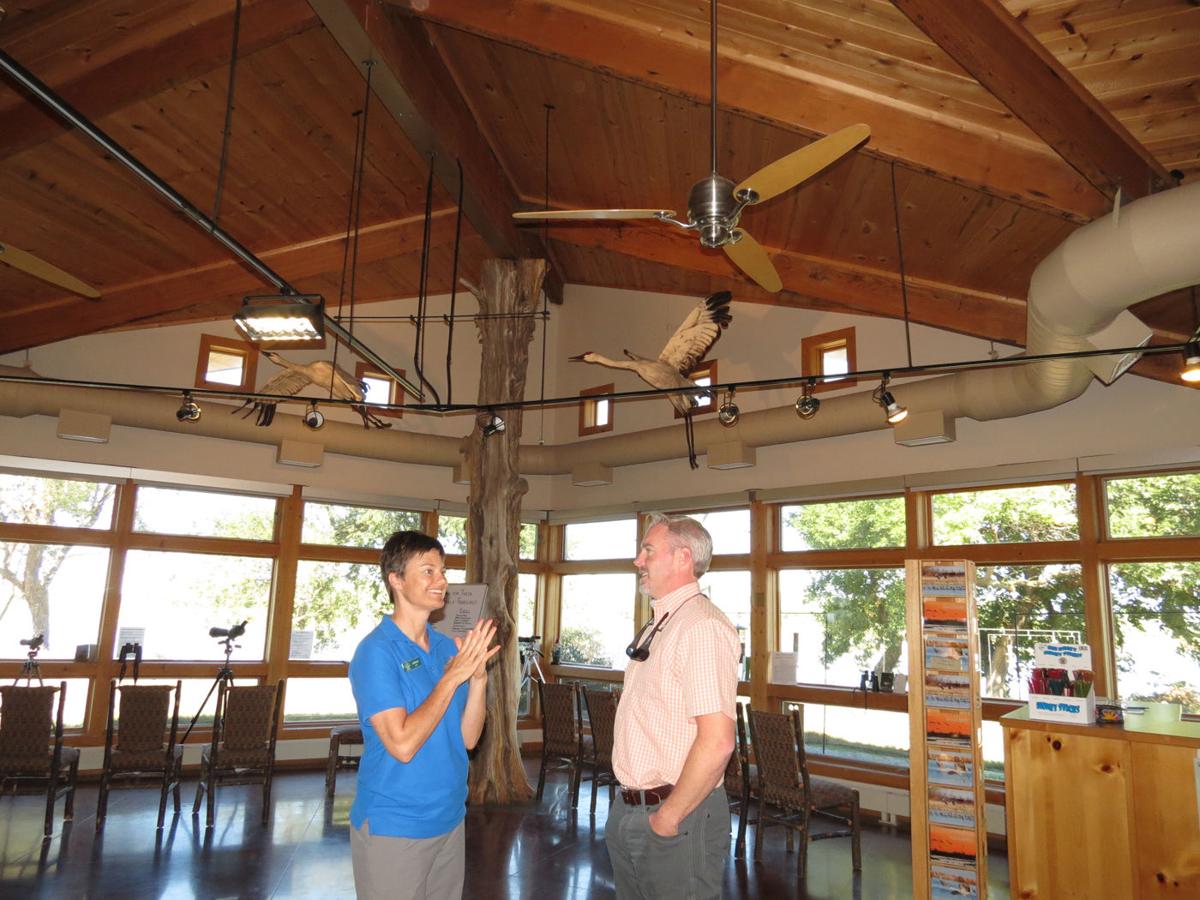 Rowe Sanctuary Special Projects Manager Autumn Taddicken, left, visits with Audubon Central Flyway Vice President Brian Trusty of Dallas in Rowe’s Iain Nicolson Audubon Center. Among the projects in the first 10-year phase of a 50-year plan for the sanctuary are two additions to the center for more space for education programs and other outreach activities. 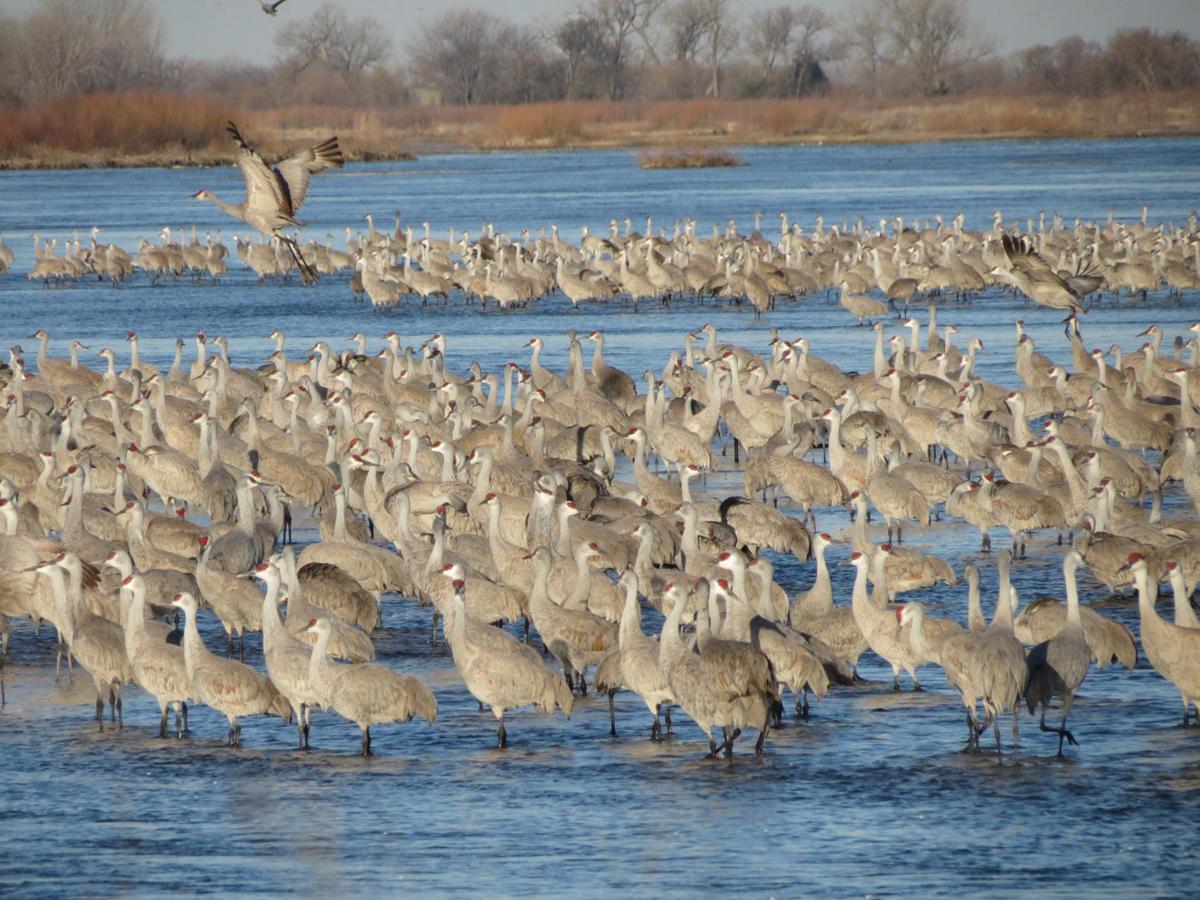 Sandhill cranes linger on Platte River sandbars on a sunny March morning during the 2016 spring migration season. The new river blinds planned at Rowe Sanctuary will be more comfortable for visitors but still maintain the crane-viewing experience. 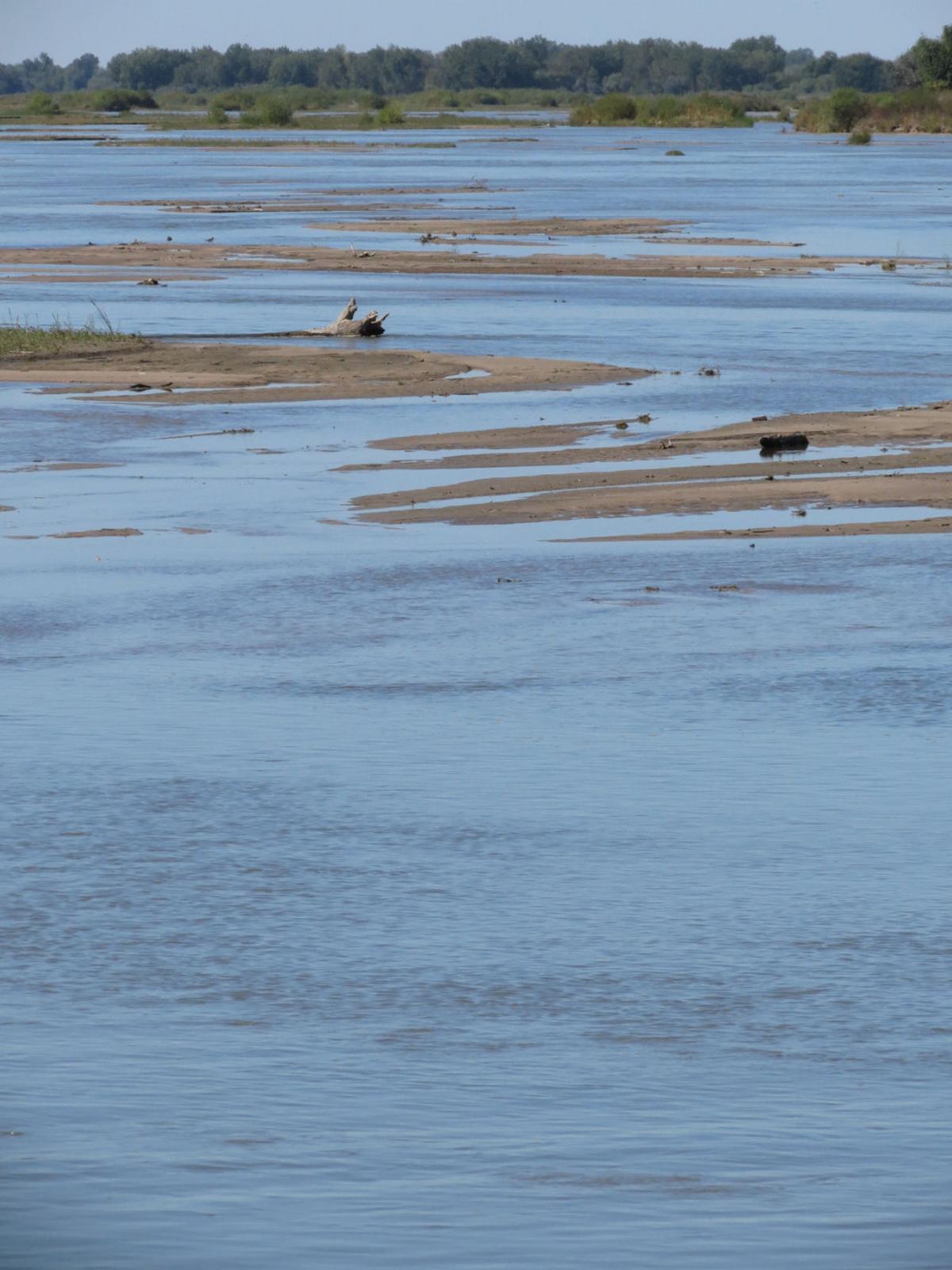 The clear channels and open sandbars maintained by Rowe Sanctuary staff between the Minden and Gibbon bridges make that segment of the Platte River prime spring migration season roosting habitat for thousands of sandhill cranes and also endangered whooping cranes.

Rowe Sanctuary Director Bill Taddicken, center, speaks to a group of travel writers last March in one of the crane viewing blinds along the Platte River. A priority for the first phase of the sanctuary’s 50-year plan is to replace current blinds with modular “discovery stations” that can be used for education programs year-round.

Rowe Sanctuary Special Projects Manager Autumn Taddicken, left, visits with Audubon Central Flyway Vice President Brian Trusty of Dallas in Rowe’s Iain Nicolson Audubon Center. Among the projects in the first 10-year phase of a 50-year plan for the sanctuary are two additions to the center for more space for education programs and other outreach activities.

Sandhill cranes linger on Platte River sandbars on a sunny March morning during the 2016 spring migration season. The new river blinds planned at Rowe Sanctuary will be more comfortable for visitors but still maintain the crane-viewing experience.

The clear channels and open sandbars maintained by Rowe Sanctuary staff between the Minden and Gibbon bridges make that segment of the Platte River prime spring migration season roosting habitat for thousands of sandhill cranes and also endangered whooping cranes.

GIBBON — A huge issue for Rowe Sanctuary officials who developed a plan for the next 50 years was how to protect globally important wildlife habitat while also meeting a goal to attract and educate more people.

“We don’t want to turn people away, but at the same time we have to be careful how we grow,” said Autumn Taddicken, special projects manager for Audubon’s Rowe Sanctuary.

The 2015 “visioning” process by staff and stewardship board members was guided by Dallas-based Studio Outside, which turned ideas into a multi-phase plan to enhance habitat, river blinds, the Iain Nicolson Audubon Center and outreach.

Taddicken said an overriding goal is to draw more visitors to the Platte River and adjacent habitats year round.

Spring migration visitation at Rowe Sanctuary continues to grow as more people come to see the 500,000-plus sandhill cranes — 80 percent of the world’s population — that spend several weeks in the Platte River’s Big Bend region.

Taddicken said that in 2002, when Rowe’s visitor center was a small space inside an old two-story farmhouse, 100 people might stop by on a peak crane season weekend day. Now, 1,000 visitors are common on such days.

Approximately 22,000 people came through the Audubon Center’s doors during the 2016 crane season and 6,400 participated in river blind tours-programs.

The habitat focus for the plan’s first 10-year phase, 2016-2026, is enhancing grasslands and wetlands on the west end of the sanctuary for priority birds, endangered whooping cranes, other migratory species and grassland birds.

“Our section of the river has the highest use by whooping cranes of any reach in the Big Bend area,” she added, because it has their preferred habitat of a clear river channel flanked on both sides by grass meadows.

Audubon owns 2,418 acres between the Minden and Gibbon river bridges, plus conservation easements on another 400 acres, said Andrew Pierson, Rowe’s director of conservation.

The Lillian Annette Rowe Bird Sanctuary was created by the National Audubon Society in 1974 on 782 acres.

Pierson said the goal is to tie together habitat components so they work better for various bird species. More open landscapes will create layers of habit from the north side of the river to the south side: native wet meadow, wetland, Platte River, wetland, native wet meadow.

Some trees along the river will be removed and crop acres on the 590-acre Pierce property acquired by Audubon in 2014 will be replaced with native grasses. Pierson said current soybean acres will be disked and planted to dryland corn in 2017. Then grass will be seeded into the corn stubble next fall.

Pierce property power lines will be buried or removed, including lines that have served irrigation wells. “We are exploring options with some of our partners on how we can restore those irrigation (water) rights back to the river,” Pierson said.

Permanent livestock watering systems will be installed in grasslands on the Pierce property and 399-acre Younkin property to the west for grazing cattle that are a grassland management tool.

Cattle now use water in a pond on the old south river channel that no longer is connected to the Platte. Taddicken said a new wildlife viewing pull-out area will be developed along that channel and near a loafing-staging area used by sandhill cranes.

Trail improvements will focus on accessibility, providing more habitat and wildlife information, and taking walkers through different habitats. “So people can do a loop that reflects a transect of the historic river from the main channel to the south channel,” she said.

Growing trail use and expanding the Audubon Center are parts of the goal to enhance education and outreach.

The center plan includes another education space with large doors that can be opened to the outdoors. Taddicken said microscopes and other equipment will allow program participants, particularly children, to bring outside things inside for closer looks.

It will be a wonderful asset to offer more education programs during crane season, she added, and also will be used for other events and meetings.

Another addition on the east side of the center will be a space for volunteers and docents, plus other uses.

Taddicken said the fits-in-nature style and tradition of the unique Audubon Center, built in 2004, will be honored in designs for the two additions.

Enhancements to Rowe’s crane viewing blinds along the Platte River will “elevate the experience to match up with the world-class phenomenon,” Taddicken said.

Protecting the cranes’ river roosts will remain a priority, along with giving visitors all the sensory experiences of crane viewing. “It is an experience, with the wind in your face and the sounds of the cranes,” she said.

“This is not going to be viewing from lounge chairs or anything,” Taddicken added, but the new blinds will be more comfortable for a wider audience, especially people who cannot stand for a long time.

Each blind will have a more climate controlled space to allow people who need to warm up while crane watching to do so.

Taddicken said the new modular design will allow the blinds — called discovery stations — to be opened for indoor-outdoor program use during other seasons.

“They’re not going to be anything like we’ve had before,” she said.

“These needs have existed for a considerable amount of time,” Taddicken said, “... in 2015, we disciplined ourselves to get it (the plan) done.”

No project can have a negative impact on the habitat value for Rowe’s priority species, she added.

Rowe officials would like to see the Audubon Center additions and discovery stations along the river completed by the 2018 crane season, but they know the contractors will have to stop work during migration seasons and at other times when construction activities might disturb birds.

The phase one habitat improvements will take longer, Taddicken said, and phases two and three will focus on habitat protection and wet meadow restorations on the east end of Rowe Sanctuary.