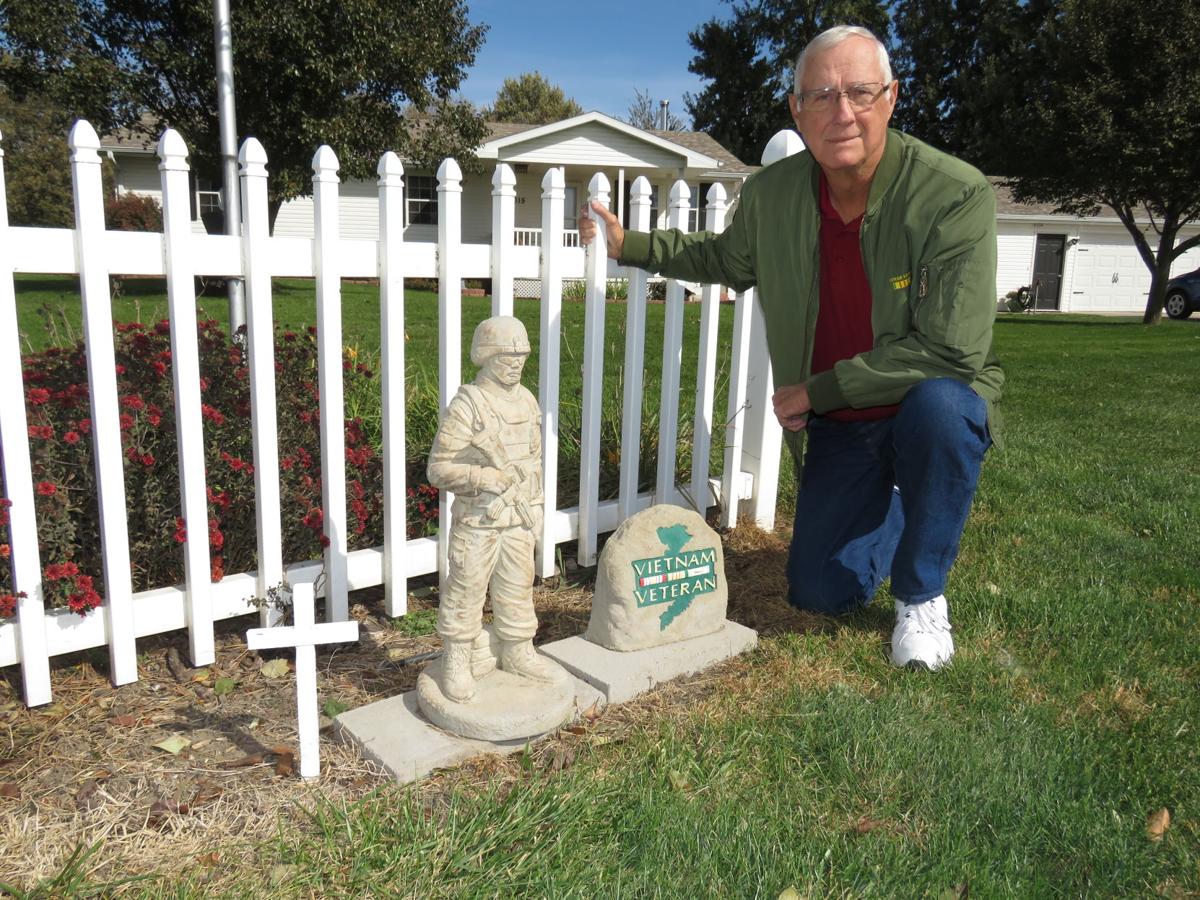 During most of his 27 years of service, retired Chief Master Sergeant John Stewart of Kearney traveled the world while involved in highly classified operations with Air Force Special Operations Forces, the Joint Chiefs of Staff, White House and United Nations. He was in Vietnam in the 1970s and, like many veterans of that war, returned home with Agent Orange-related health issues. 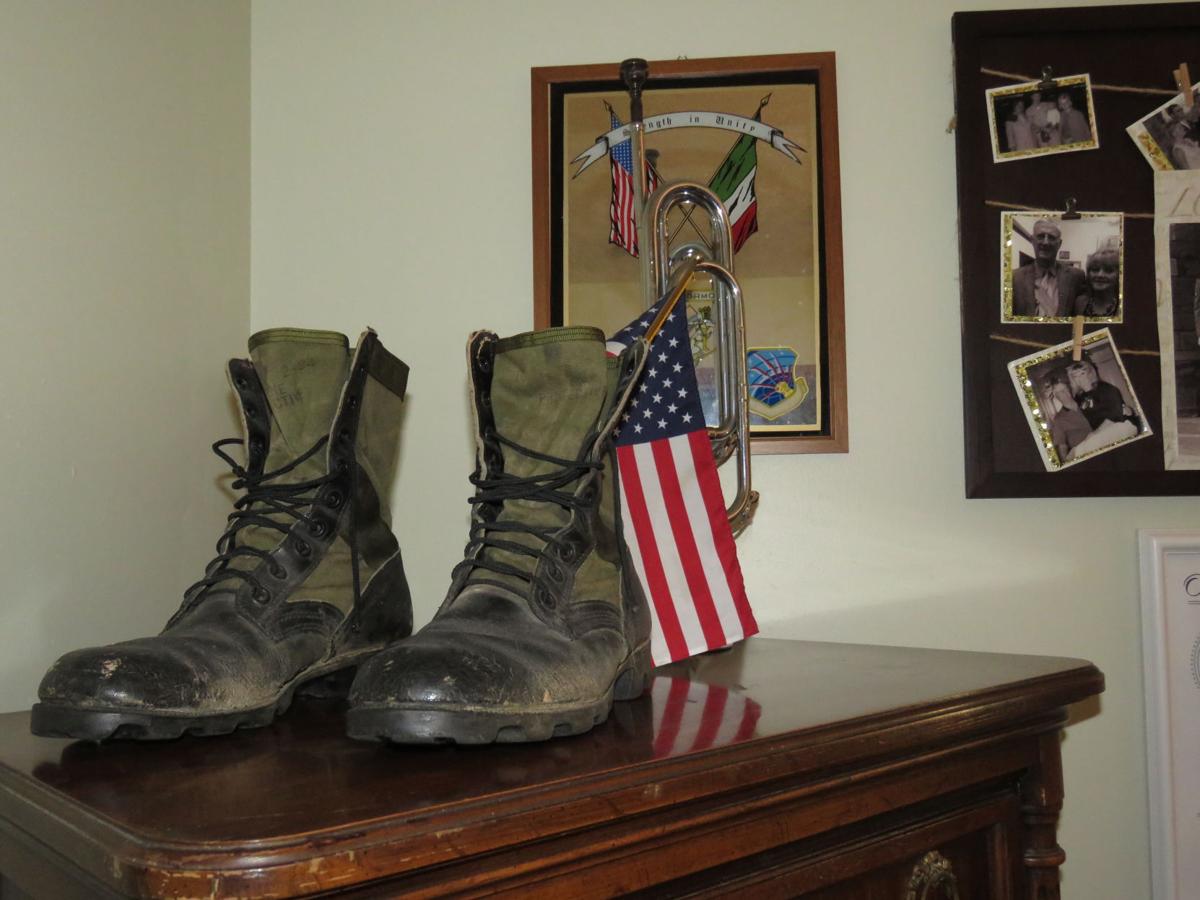 Displays in a military memorabilia room in John Stewart’s Kearney house include these boots he wore in South Vietnam. Stewart never cleaned the boots after returning to the United States.

During most of his 27 years of service, retired Chief Master Sergeant John Stewart of Kearney traveled the world while involved in highly classified operations with Air Force Special Operations Forces, the Joint Chiefs of Staff, White House and United Nations. He was in Vietnam in the 1970s and, like many veterans of that war, returned home with Agent Orange-related health issues.

Displays in a military memorabilia room in John Stewart’s Kearney house include these boots he wore in South Vietnam. Stewart never cleaned the boots after returning to the United States.

Too bad he can’t tell many of them.

“In my last 23 years in the Air Force, I had a Top Secret clearance or higher,” Stewart said.

He traveled the world with the elite Air Force Special Operations Forces and was involved in other highly classified operations, particularly in the Middle East, in support of the Joint Chiefs of Staff, White House and United Nations.

That includes his 1970 radio and air traffic control operations assignment at Cam Ranh Air Force Base in South Vietnam.

A “Vietnam Veteran” sculpture and American flag decorate Stewart’s front yard north of Kearney. Boots aged with South Vietnam dirt from 1970 are displayed in a military memorabilia room inside his house.

Stewart is among Vietnam veterans who brought home something else that forever changed their lives: Exposure to Agent Orange, a powerful herbicide sprayed to eliminate forests and crops.

Stewart left the military in 1989, at least 10 years earlier than planned, because of “politics.” It was soon thereafter that Agent Orange-related health problems emerged.

“I had a double bypass at age 49, so many other heart procedures I can’t count them, four or five strokes,” he said in mid-October, days before getting an expected confirmed diagnosis of Agent Orange-related cancer.

“What people don’t realize is we’re passing that on to our children and grandchildren,” Stewart said about genetic alterations linked to Agent Orange. “I’m 100 percent disabled now.”

He said his older brother, an Army lieutenant colonel, died in 1975 of Agent Orange-related illnesses. Another brother, a retired Marine, he said, is terminally ill from drinking water at Camp Lejeune, N.C., that was contaminated by dry cleaning chemicals. His youngest brother served one tour of duty in the Navy.

Military service was an escape from poverty for the West Virginia brothers who were abandoned by their father at a young age and grew up in a log house that, for years, had no plumbing or electricity. The school bus stop was miles away.

“We ended up living off the land. I was the hunter and my brothers were the planters,” Stewart recalled. “... Mom canned everything. If it could be pickled, she pickled it.”

“I knew we were starving, and $78 a month (military pay) was a lot,” he said, noting that he weighed 125 pounds when he dropped out of school at age 17 to join the Air Force. Stewart later earned a GED, associate degree and then a bachelor’s degree in computer science from the University of Maryland.

“I started as a plain old radio operator. I got into leading people. I was good at it,” Stewart said.

His rank of chief master sergeant is the highest for enlisted personnel, he said, and is achieved by only 1 percent of Air Force service members.

Stewart was in the Middle East — Iran, Egypt, Saudi Arabia, Turkey — for a total of 15 years.

He also spent a lot of time in Germany working in a Ramstein AFB building that required security clearance for entrance. It’s also where he met his wife, Renate.

“She never knew where I was. I always had two bags packed, one for cold weather and one for warm weather, because sometimes I didn’t know where I was going,” Stewart said.

His missions involved clearing mines in the Suez Canal, opening embassies in Iran and Egypt following regime changes, and serving in President Jimmy Carter’s crisis group while U.S. diplomats and other citizens were being held hostage in Iran from late 1979 to early 1981.

“We were ready to go to war, big time war,” Stewart said. He told Carter he was against such a major military response because he knew from his earlier work in Tehran that almost everyone there was armed, so casualties would be huge.

His example was a day when President George H.W. Bush came into a room in the top secret building on the German base for a briefing. One of Stewart’s main concern that day was that Bush would learn that a refrigerator in the corner was filled with beer.

Bush opened the refrigerator door, turned to Stewart and said, “Chief, can I have a beer?”

Stewart replied, “Sir, you’re the ... president. You can have anything you want.”

KEARNEY — Chuck Ogle still fingers the helmet he wore as a pilot in Vietnam 51 years ago. Th…

As Stewart prepared to leave the Air Force, President Ronald Reagan sent a personal note dated Sept. 18, 1989, that thanked him for his service. It’s framed and hanging on a wall in Stewart’s house.

Two years later, possibly on Stewart’s birthday or anniversary, he received by mail a small laminated wooden box. It has a color photo of Reagan on the lid and only a single-serving bag of jelly beans, Reagan’s favorite candy, inside.

Out of the darkness

In 1995, growing health issues forced Stewart to retire from a “computer guy” job he’d had at a Norfolk, Va., company for the six years since leaving the Air Force. He and Renate moved to Florida.

On a hot July day, Stewart intended to end his life.

“Because I was lost,” he said. “... One night, I just had enough of it. I went out to the camper and took my shotgun with me. I was reading the insurance papers and saw they all had suicide clauses. I couldn’t do that to her (his wife).”

The next day, he got on a bicycle — a gift from his son Kelly, a highly decorated former Army Green Beret sniper with multiple tours in Iraq now living in Virginia — and rode approximately 25 miles.

The day after that, Stewart did it again.

Then he found a new mission that started with volunteering at a Florida hospital and working with other veterans needing help. He has been editor-publisher of four veterans magazines, participated in Hero Flights, and served as VFW post commander in Kearney, Florida and Virginia.

Along the way, he became an ordained minister-chaplain who was associate pastor at a Lutheran church in Florida, he presided at more than 2,000 military funerals and he visited veterans homes, hospitals and hospice centers.

As veteransgrapevine.com editor, he writes extensively about veterans benefits and other issues, and hosts websites for veterans organizations and veteran-owned businesses.

Stewart is a member of the Central Nebraska Veterans Memorial Committee and the Nebraska Veterans Commission, which seeks an end to Nebraska’s state taxes on military pay and pensions, as has been done in Iowa and 27 other states.

He and Renate formerly lived in Kearney, but went back to Florida for 11 years. They returned to Kearney two years ago to be near the family of their daughter and son-in-law Sylvia and Robert Mishou, both Kearney High School teachers.

Stewart worries about other veterans, men and women still serving full time or with the National Guard, and military families who don’t get sufficient community support while their loved ones are deployed.

He believes the Veterans Administration will be overwhelmed during the next decade by military-related suicides. Stewart’s generation, particularly Vietnam veterans, currently have the highest rate, but he knows an increase is ahead for younger veterans with PTSD from multiple deployments.

“If I’d done four tours in Vietnam, I would have been gone,” Stewart said. “I work with kids now who are on their 11th or 12th time.”

US Navy veteran pursuing second career with help from UNK