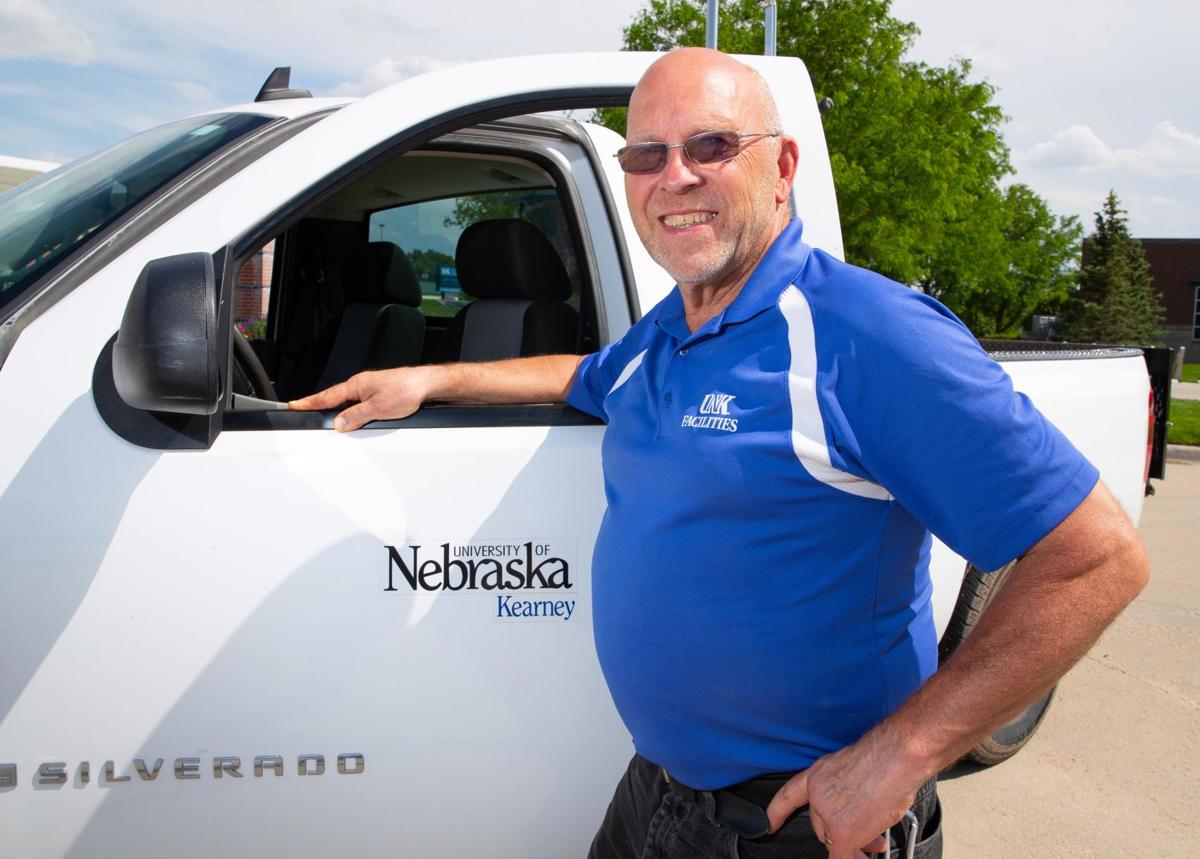 Don Wellensiek has overseen setup and take down for countless UNK events over the past 15 years. “The bigger the event, the better I like it,” he said. “When UNK is a showplace, I enjoy that.” 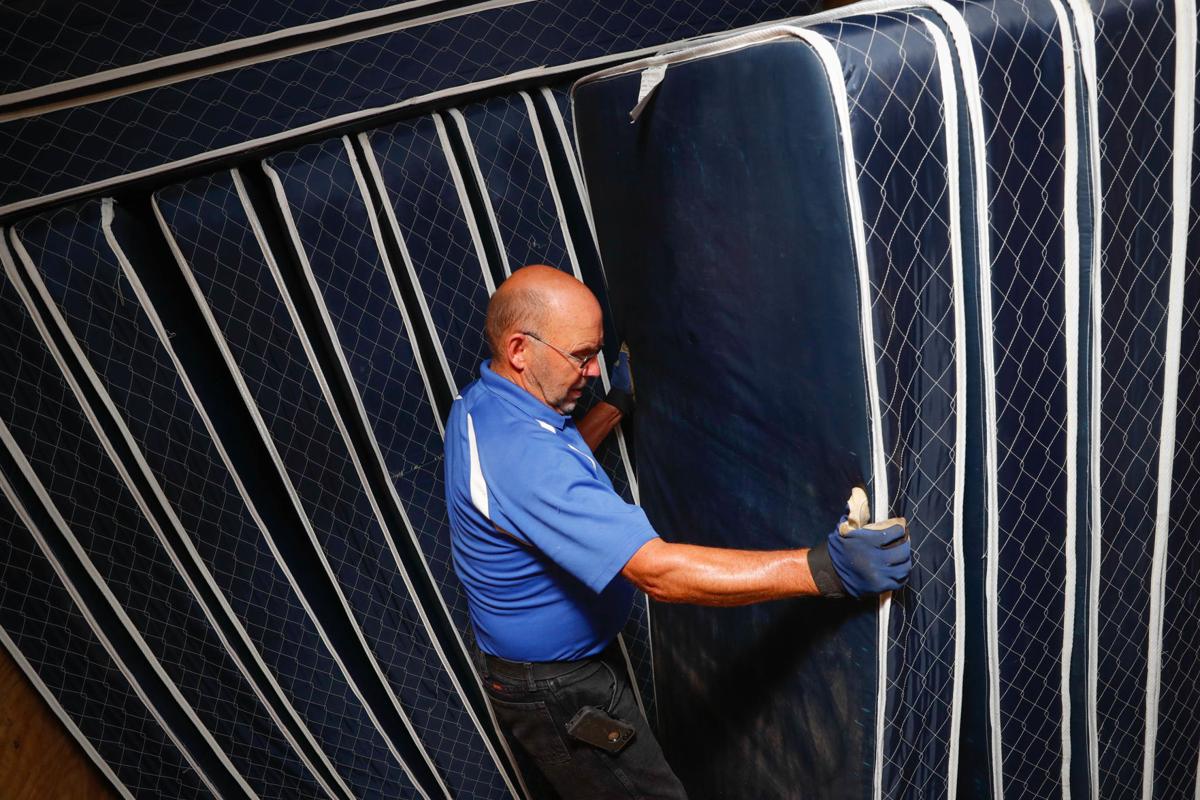 Don Wellensiek organizes retired mattresses from UNK residence halls, which are donated to nonprofits and organizations that serve the community and help people in need. He is retiring after 15 years at UNK.

Don Wellensiek has overseen setup and take down for countless UNK events over the past 15 years. “The bigger the event, the better I like it,” he said. “When UNK is a showplace, I enjoy that.”

Don Wellensiek organizes retired mattresses from UNK residence halls, which are donated to nonprofits and organizations that serve the community and help people in need. He is retiring after 15 years at UNK.

KEARNEY – Don Wellensiek was once told he didn’t need to treat every event on campus like a five-star soiree.

That’s not how Wellensiek operates. The event/moving team leader with University of Nebraska at Kearney Facilities Management and Planning refuses to put less than his best effort into anything he does.

“Whether an event is for a group of 10 people or 5,000, it’s important to them, so you do your best to make sure it’s up to the standards that it ought to be,” Wellensiek said.

The 65-year-old Cook native has been in charge of event setup and takedown since he arrived at UNK in August 2004. It’s a job he takes quite seriously.

“I kind of joke sometimes that although I really enjoy people and enjoy being around people, I’m not always the easiest person to work for because I’m rather particular on how we do things,” he said.

Wellensiek and his team have assisted with countless UNK events over the past 15 years, from small meetings for individual departments or organizations to large gatherings such as the annual Blue Gold Showcase, which brings 2,000 to 3,000 students and community members together each August.

“The bigger the event, the better I like it,” Wellensiek said. “When UNK is a showplace, I enjoy that.”

That’s why commencement ceremonies are his three favorite workdays each year. Wellensiek is proud to showcase the Health and Sports Center for a few thousand attendees while honoring UNK graduates.

It takes two to three days to set up for the celebration, and a couple hours to tear everything down. That effort doesn’t go unnoticed.

“Without fail, Chancellor (Doug) Kristensen stops and thanks me every time,” Wellensiek said.

Wellensiek, whose final day at UNK is June 28, has earned the respect of plenty of others on campus, as well.

“Having worked closely with Don for years, I see the passion he exudes every day for the university, the students and the greater Kearney community,” said LeAnn Jochum, associate director of operations in UNK’s Office of Residence Life. “He has so much pride for presenting UNK well during graduations, large-scale tent events and other opportunities that showcase our beautiful campus to visitors and guests.”

Mannie Reinsch, who often works alongside Wellensiek as UNK’s assistant athletic director for facilities and events, called his colleague a “behind-the-scenes guy” always looking to do what’s best for the university.

“It often goes unseen how much he does and how hard he works to make sure every event on campus is taken care of,” said Reinsch, who considers Wellensiek a mentor.

“Don has helped me out in every step of my career at UNK,” Reinsch added. “He’s a great friend who will be missed here.”

In addition to his duties as an event team leader, Wellensiek also serves as UNK’s surplus inventory manager.

For the past 13 years, he’s organized the annual surplus auction, which has generated more than $200,000 in net proceeds during that time.

The auction, which Wellensiek bills as a mix of “the usual and the unexpected,” allows UNK to liquidate items that are no longer needed on campus, including furniture, equipment and vehicles. Chandeliers, brass mailboxes, a medical mannequin, 16-foot artificial tree and walk-in cooler are among “the unexpected” items sold over the years.

“There’s always something unique on that auction that somebody finds,” said Wellensiek, who oversaw his final sale last week.

Wellensiek also implemented a monthly “open hours” event when UNK faculty and staff can peruse the surplus supply and select items to use in their department before they’re put on the auction block.

Other retired inventory, mainly mattresses and furniture from residence halls, is donated to nonprofits and organizations that serve the community and help people in need. UNK has donated hundreds of mattresses to organizations such as the Salvation Army, Crossroads Center - which operates homeless shelters in Kearney and Hastings - and Orphan Grain Train, a Norfolk-based nonprofit that sends clothing, medical supplies, food and other aid to people across the globe, including Nebraskans impacted by the recent flooding.

“Don has worked tirelessly to be a good steward in this area and sought out nonprofits that can benefit from this resource that would otherwise be hauled for disposal,” Jochum said. “These partnerships benefit the university by encouraging sustainability, as well as the greater community, which is a testament to Don’s efforts to always go the extra mile.”

“He will surely be missed for his can-do attitude and passion for all that UNK stands for,” Jochum added.

A farmer and livestock producer before joining UNK, Wellensiek said he’s been “really fortunate” to work with so many great people over the past 15 years.

“I’ve had the opportunity to interact with a lot of different people on campus,” he said. “That’s the best part. I can’t walk into someplace and work with them without trying to engage in conversation and get to know them a little better and develop a relationship with them.”

His friendly approach left a lasting impression on many UNK employees, including Vice Chancellor for Business and Finance Jon Watts.

“Don came to work every day to do the right thing,” Watts said. “People can get frustrated because there are so many policies and procedures. Don overcame this frustration by treating everyone he encountered like his customer. He owned his ability to help people, connecting with them on a personal level and always taking ownership of his ability to help them achieve a goal.”

Wellensiek, who lives on an acreage near Shelton with his wife Nancy, has been thinking about retirement for a couple years, and finally decided “the time is right.”

He has some projects to tackle at home and daughters who live in Omaha and Kodiak, Alaska, with their husbands and his six grandchildren.

Not surprisingly, he also has some part-time work in mind, perhaps auctioneering or assisting at a funeral home.

“That first week I may sit around for just a little bit, but it won’t take long and I’ll be back in action doing something,” Wellensiek said. “I don’t sit around very well.”