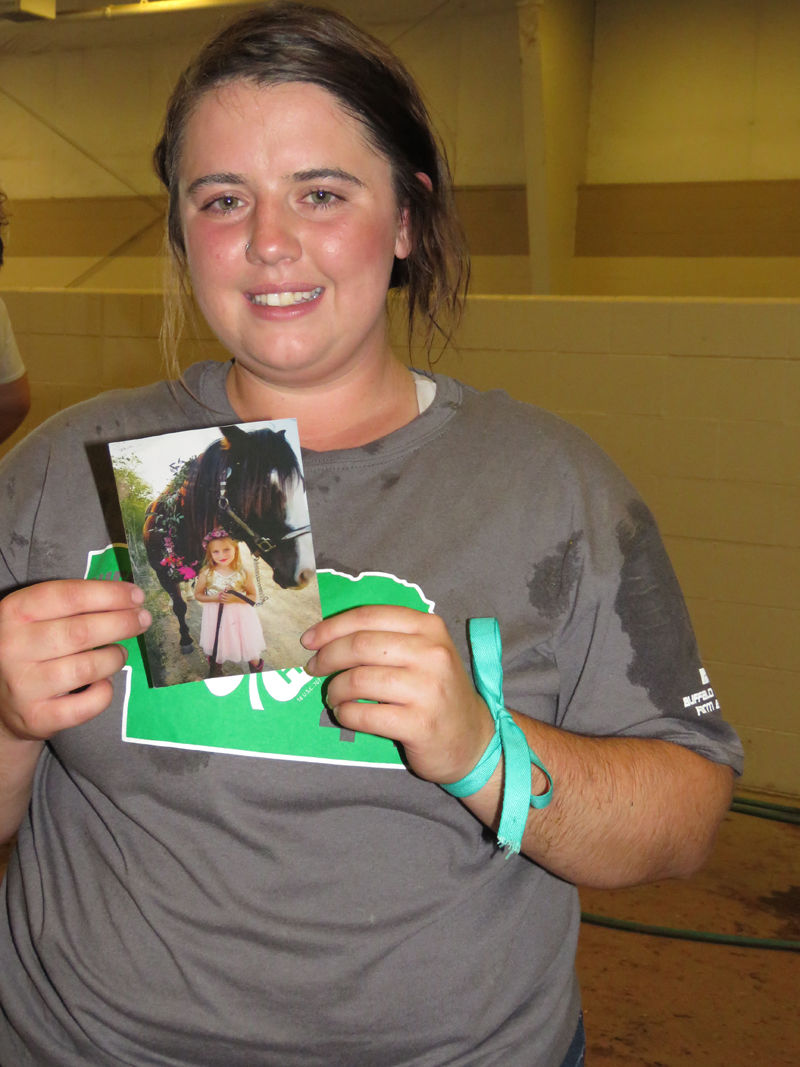 McKenna Hubbard’s tears were a mix of joy and sorrow Saturday after she showed the 4-H Market Beef Show’s reserve grand champion at the Buffalo County Fair. She carried with her a photo of her niece Aubree, 7, who died last Tuesday in an accidental electrocution. 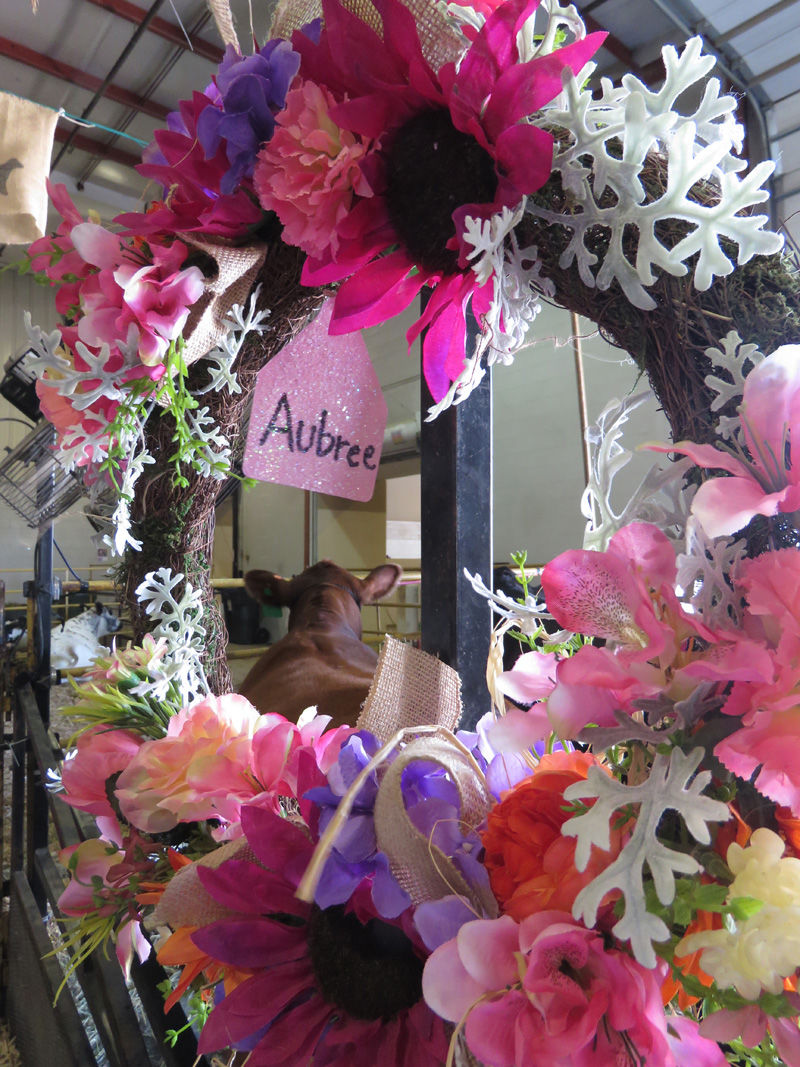 Members of Elm Creek’s Westside Feeders 4-H Club created a memorial to Aubree Hubbard next to the club’s sign in the Ag Pavilion’s cattle stall area. She had planned ato participate in this morning’s 4-H Clover Kids Bucket Calf Show.

McKenna Hubbard’s tears were a mix of joy and sorrow Saturday after she showed the 4-H Market Beef Show’s reserve grand champion at the Buffalo County Fair. She carried with her a photo of her niece Aubree, 7, who died last Tuesday in an accidental electrocution.

Members of Elm Creek’s Westside Feeders 4-H Club created a memorial to Aubree Hubbard next to the club’s sign in the Ag Pavilion’s cattle stall area. She had planned ato participate in this morning’s 4-H Clover Kids Bucket Calf Show.

KEARNEY — The snapshot McKenna Hubbard carried in the back pocket of her blue jeans throughout the Buffalo County Fair features a small blonde girl wearing colorful flowers in her hair taking a walk with a large brown horse that has white blaze down its face.

McKenna pulled the photo from her pocket immediately after Saturday’s 4-H Market Beef Show to explain, without words, what everyone around her knew. Her tears reflected both joy and sorrow.

The joy was having shown the reserve champion market beef after winning senior showmanship earlier in the day. The sorrow was because the little girl in the photo is her 7-year-old niece, Aubree Hubbard, who died last Tuesday in an accidental electrocution. It happened at the rural Elm Creek farmstead of Aubree’s grandparents — McKenna’s parents — Harold and Darla Hubbard.

A preliminary report from the Buffalo County Sheriff’s Department said there seemed to be a problem with an electrical connection on a fuel barrel, which was on a trailer.

“It’s been super hard all week,” McKenna said as she waited near a Buffalo County 4-H banner to be photographed with her 1,440-pound crossbred steer named Uncle Jesse.

She had found some solace in the Ag Pavilion show ring. “It’s my element and I feel comfortable there,” said McKenna, who had exhibited the grand champion market beef at the 2017 fair.

This is McKenna’s last year of 4-H eligibility. The Kearney High School graduate will start nursing school in a few weeks at the University of Nebraska at Kearney.

Her final 4-H auction at the fair will be Tuesday morning. McKenna said she will donate the money from the sale of her reserve grand champion steer to a college fund for Hudson, Aubree’s 5-year-old brother.

“The support for Hudson has been unbelievable,” Darla said. “... We’re very lucky to have him with us. He got shocked, too.”

Darla said Hudson was in the hospital overnight after the accident, but is doing fine. “Thank the Lord for that,” she added.

In addition to Aubree’s photo, McKenna carried with her into the show ring Saturday a fortune cookie message she described as one of several signs her family has had in the past several days that “she’s been with us.”

During the 4-H Beef Show lunch break, McKenna and a friend went to a Chinese restaurant.

“I don’t like fortune cookies. I think they’re gross,” McKenna said, but her friend encouraged her to take one to see what the message would be. The message was, “Someone you lost recently is with you today.”

“It kind of kept me going,” McKenna said, to have her own Aubree sign to go along with ones experienced by other family members.

Her sister Jocelyn went to a coffee shop to get drinks for their brother and sister-in-law Ivin and Natasha, who are Aubree’s parents. The message on the drive-through chalkboard often is something funny, McKenna said, but this time it was, “You’ll always be in our hearts.”

Darla advises other farmers and ranchers to “be aware to unplug your drop (extension) cords every time you’re done” using them.

The extension cords used at their farm don’t have bare wires or damaged places covered with tape, but others do. “Throw those drop cords away,” Darla said. “Everyone has them on the farm.”

Both women knew that today (Monday) will be the most difficult day since the accident. Aubree’s funeral was this morning at Holy Cross Lutheran Church in Kearney.

The 4-H Clover Kids Bucket Calf Show at the fair was at the same time. Aubree had entered her calf in the show.

Her obituary says she enjoyed many outdoor activities, including riding her bike, swimming at the pool, playing T-ball, fishing and checking traps. “She adored babies and all animals,” it continued, “with her favorite being her bucket calf, Rosie.”

McKenna, who wore a turquoise ribbon on her wrist during the fair, said Aubree’s favorite colors were turquoise and purple.

It sounds like a girl who would wear colorful flowers in her hair when taking a walk with a large brown horse that has a white blaze down its face.

One child dead, another injured following electrocution near Elm Creek