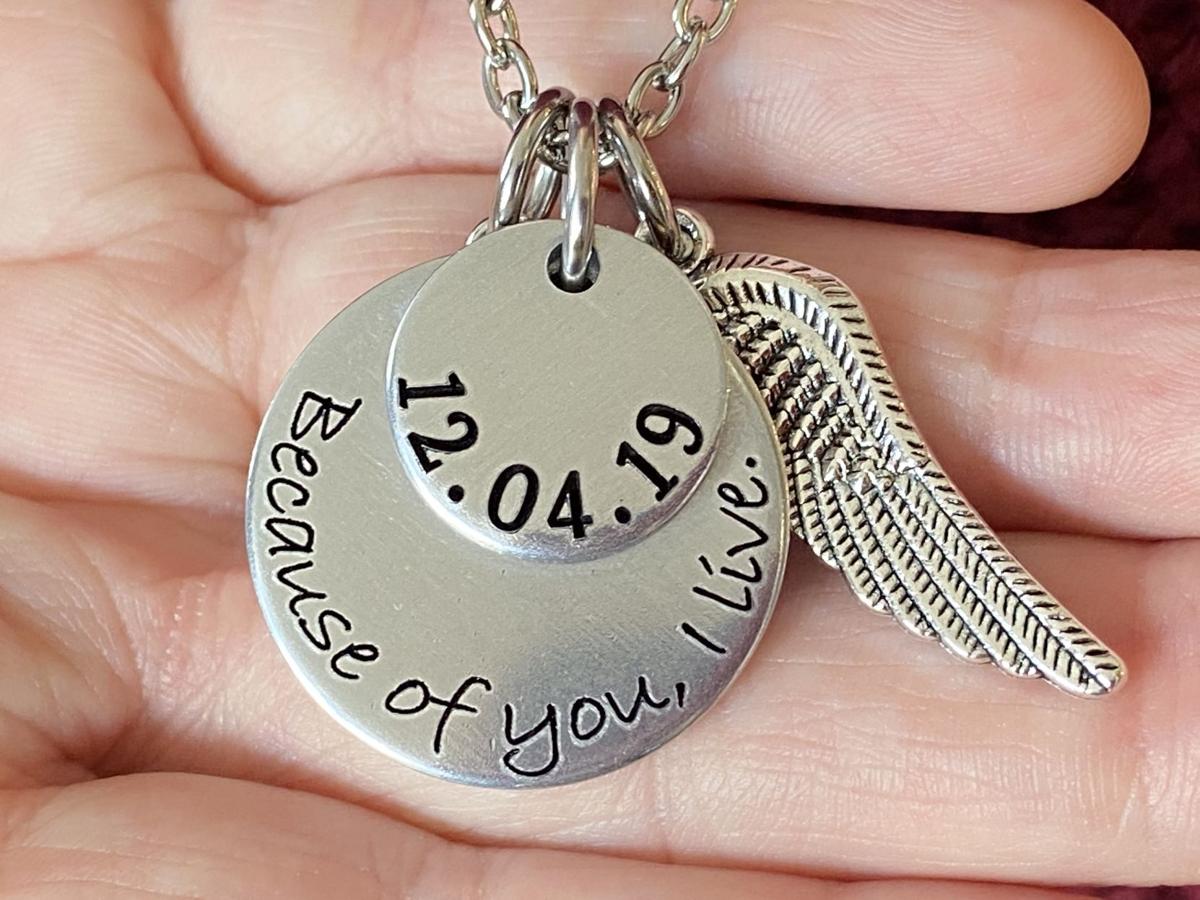 Kidney transplant recipient Becky Harris and her donor Becky Crandall both wear this necklace as a reminder of their special connection. 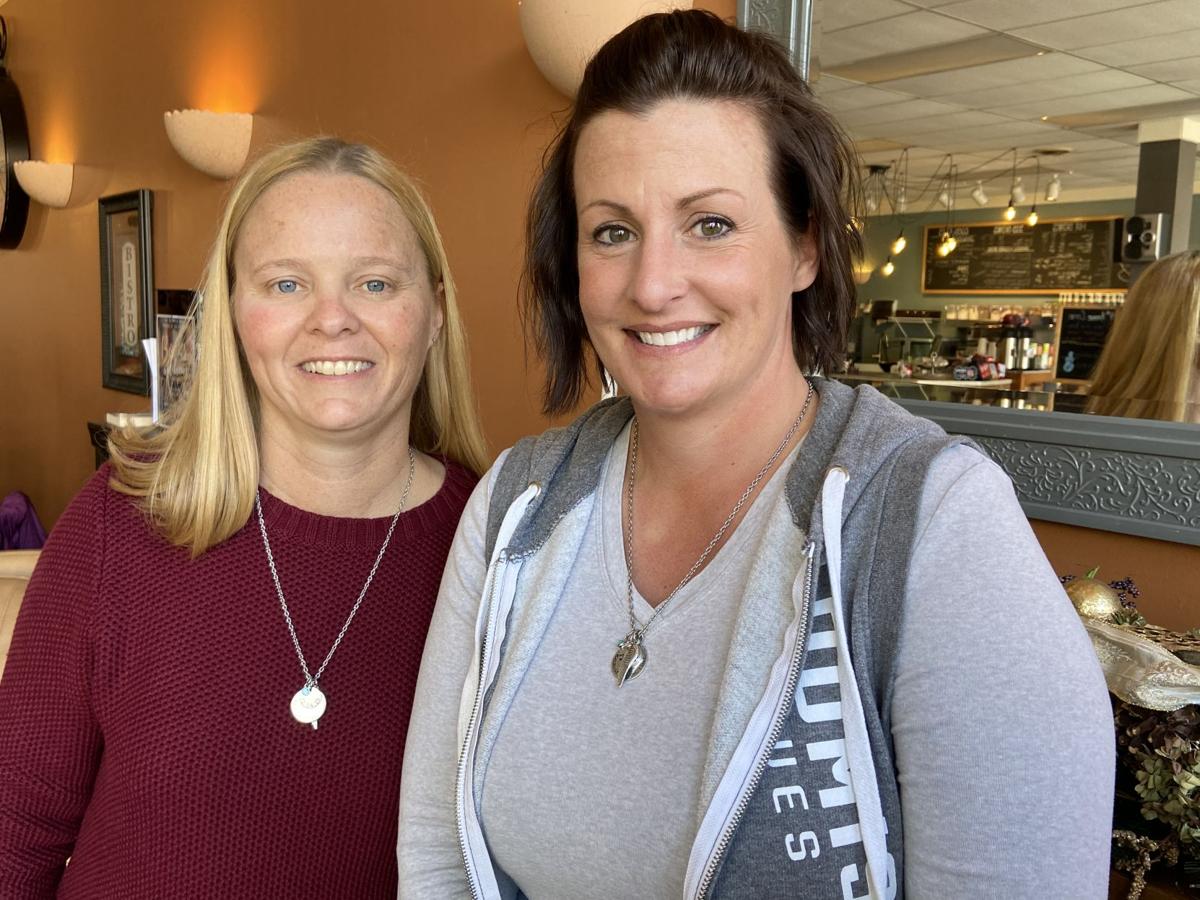 Becky Harris, left, received a kidney from Becky Crandall in December. Both women live in rural Loomis and are the same age and have the same blood type.

Kidney transplant recipient Becky Harris and her donor Becky Crandall both wear this necklace as a reminder of their special connection.

Becky Harris, left, received a kidney from Becky Crandall in December. Both women live in rural Loomis and are the same age and have the same blood type.

LOOMIS — Some folks still may be bragging about the iPad, Apple Watch or diamond earrings they received for Christmas.

But, a Loomis mom received a gift that wins all bragging rights — a kidney from a living donor.

“It was the best Christmas present I could have ever asked for,” said kidney transplant recipient Becky Harris. “Nobody will ever be able to top that gift.”

That gift gave Harris a chance at a longer and healthier life, which seemed like a dim possibility after she recently was diagnosed with lupus and was told she would need dialysis or a kidney transplant.

Luckily for Harris, she has a friend, Becky Crandall, who shares more than a first name.

Although the two Beckys grew up hundreds of miles apart — Harris in Lexington and Crandall in Wyoming — they both ended up living in rural Loomis.

They met about six years ago when they served together on the Phelps County Ag Society Board.

Crandall and her husband, Brent, and their children, Thomas, 18, and Georgia, 15, have been involved in the Loomis Livestock 4-H Club as are Harris and her husband, Ed, and their daughters, Sydney, 12, and Natalie, 9. It was through their involvement in 4-H that their bond grew during the past few years.

“She called and asked if Georgia would come over and give Sydney some instruction on showing sheep,” Crandall said of Harris.

Georgia was glad to help.

A week later, Harris texted Crandall asking if Georgia could help again. This time, Harris shared she was only able to help Sydney for about 20 minutes before getting too tired.

Crandall texted back and said, “I hope everything’s OK with you, and we’d be glad to help any way we can.”

Harris replied revealing that she was in stage 4 kidney failure.

Almost immediately, Crandall texted back, “When you need a kidney, let me know, and I’ll be the first one to sign up.”

“I always thought if I could ever donate a kidney, I’m doing it,” Crandall said. “But, I don’t feel like I was selfless enough to just send it anywhere. I wanted to know who I was giving it to.”

The journey to a new kidney for Harris began in April 2019 when she broke her arm. A trip to the emergency room revealed an abnormally high blood pressure.

“That was not common for me, but I had not seen my doctor for a few years,” Harris said.

She scheduled a follow-up doctor’s appointment. Before they put Harris on blood pressure medication, they tested her kidney function, which revealed a major malfunction. By summer, Harris was diagnosed with lupus, an autoimmune disorder that causes the body’s immune system to become hyperactive and attack normal, healthy tissue, such as the skin, kidneys, heart and lungs.

“Had I not broken my arm, I would not have gone to the doctor,” Harris said. Looking back, she wishes she had stayed on top of her health better and encourages others to see their doctor regularly.

“Because I never went to the doctor for four or five years, I have no idea how long my kidneys were shutting down,” she said.

Just before the Phelps County Fair, Harris completed the initial paperwork to submit a request to be considered for a kidney transplant.

By fair time in late July, her kidneys were failing even more. But, she didn’t want to miss her daughters show their animals or skip out on her fair board duties. She put on a smile and pushed through the pain and fatigue.

In early September, Harris pulled Crandall aside at a Loomis volleyball game and said, “If you are serious about this, it’s time.”

Crandall went home that night and initiated her side of the process on the Nebraska Medical Center’s website. Two days later, medical staff called her and then forwarded her the official packet of paperwork to begin the process, which involved stages of medical tests and evaluations to determine her own health and the health of her kidneys.

Crandall was determined to make this happen. She also learned that if she wasn’t a match for Harris that the Med Center could perform a kidney paired donation. In that scenario, Harris would have received a kidney from another matching donor at the same time as Crandall would be giving her kidney to another recipient.

“I never once had a thought that I wouldn’t make it through all the testing,” Crandall said. “I was going to give my kidney to either Becky or someone.”

After months of testing and several tense days of waiting, Harris learned right before Thanksgiving that she was approved for a transplant and that Crandall was an excellent match. Turns out, they also share the same blood type.

“It’s not the easiest thing to find a living donor that’s willing to give you a kidney,” Harris said. “To find one that matches you is even more rare.”

Donors must be in good medical condition, and the transplant is more successful if the donor and recipient are close to the same age, same size and same gender. Check, check and check. Having the same first name is just a bonus.

Crandall and Harris wanted to schedule the procedure as soon as possible. The first opening was on Dec. 4, and that’s what they scheduled.

“We were leaving our families during the holidays,” Crandall said. “There’s a lot to do, but when you take all of that stuff away, the only thing that matters is this kidney. Becky’s health and life depends on this. Everything else will take care of itself, somehow.”

And, it did, with a lot of help from family and friends.

Both Beckys reported to Omaha for surgery the week of Dec. 4.

Crandall underwent a laparoscopic surgery to remove her left kidney.

Harris underwent a four-hour surgery to transplant Crandall’s kidney over the top of her right kidney.

Crandall was dismissed after two days but was required to stay in Omaha for a week longer to ensure there were no complications.

Prior to surgery, doctors told Harris to expect to be in Omaha for six weeks after surgery. But, she was determined to be home for Christmas.

“I told the doctors before surgery that I’d be home for Christmas,” Harris said.

And, Harris was right. She was home a week before Christmas with her new kidney, a new bundle of energy and a brighter future.

Crandall said she hopes that by donating her kidney, it will encourage others to consider doing the same if they have a chance, or to give in their own way.

“People say a person who donates an organ is a hero, but everyone when they give something — time, money, skill or protection — they are heroes. For me personally, I don’t feel a lot different than the farmer who harvested somebody else’s field when that farmer was sick. It’s just a different avenue. It all comes from the same place, an effort of giving and caring. We all have that within us.”