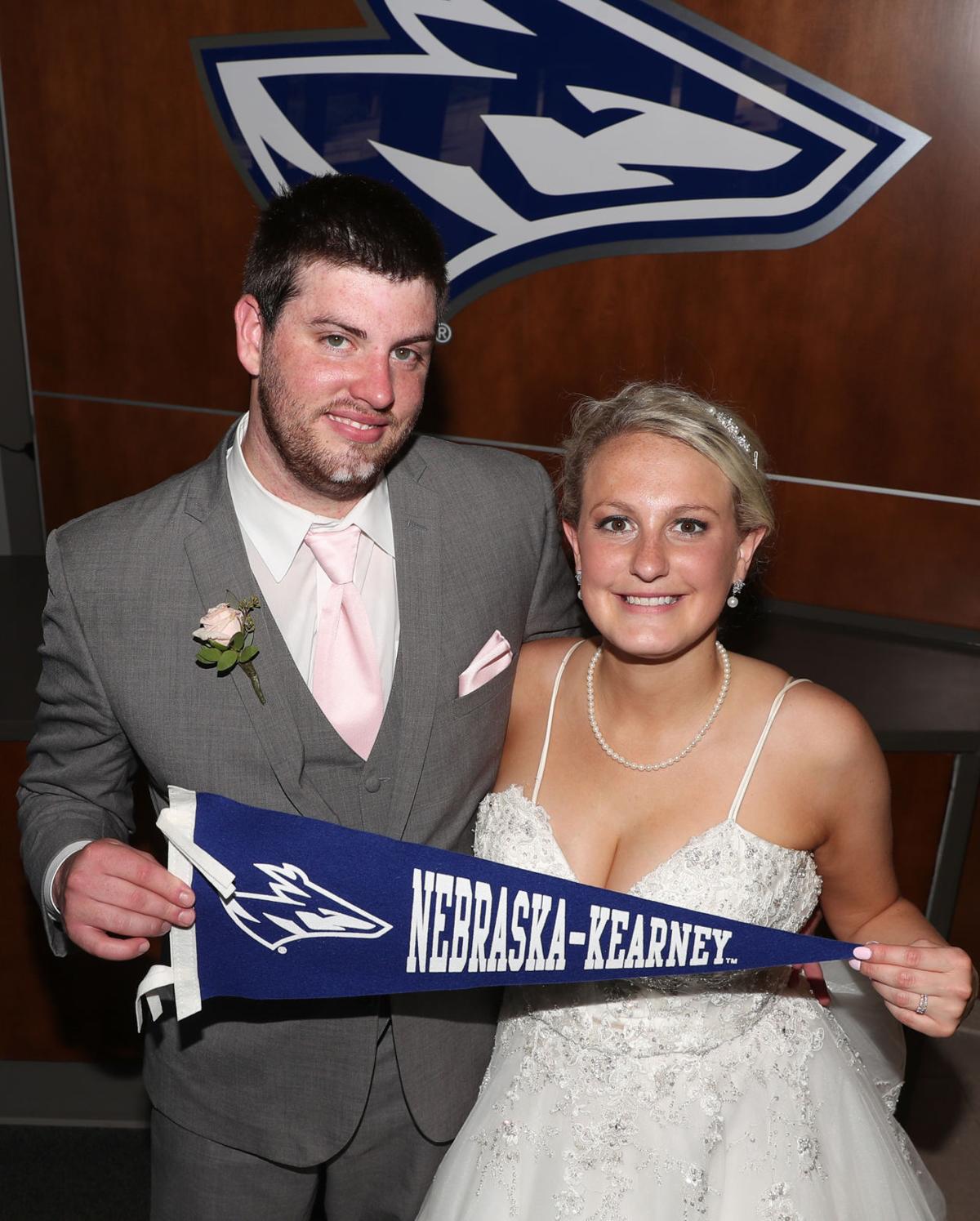 Levi Streit and Megan Woeste celebrated their wedding Saturday in UNK’s Nebraskan Student Union after flooding forced them to move the reception from the Holiday Inn and Convention Center in Kearney. 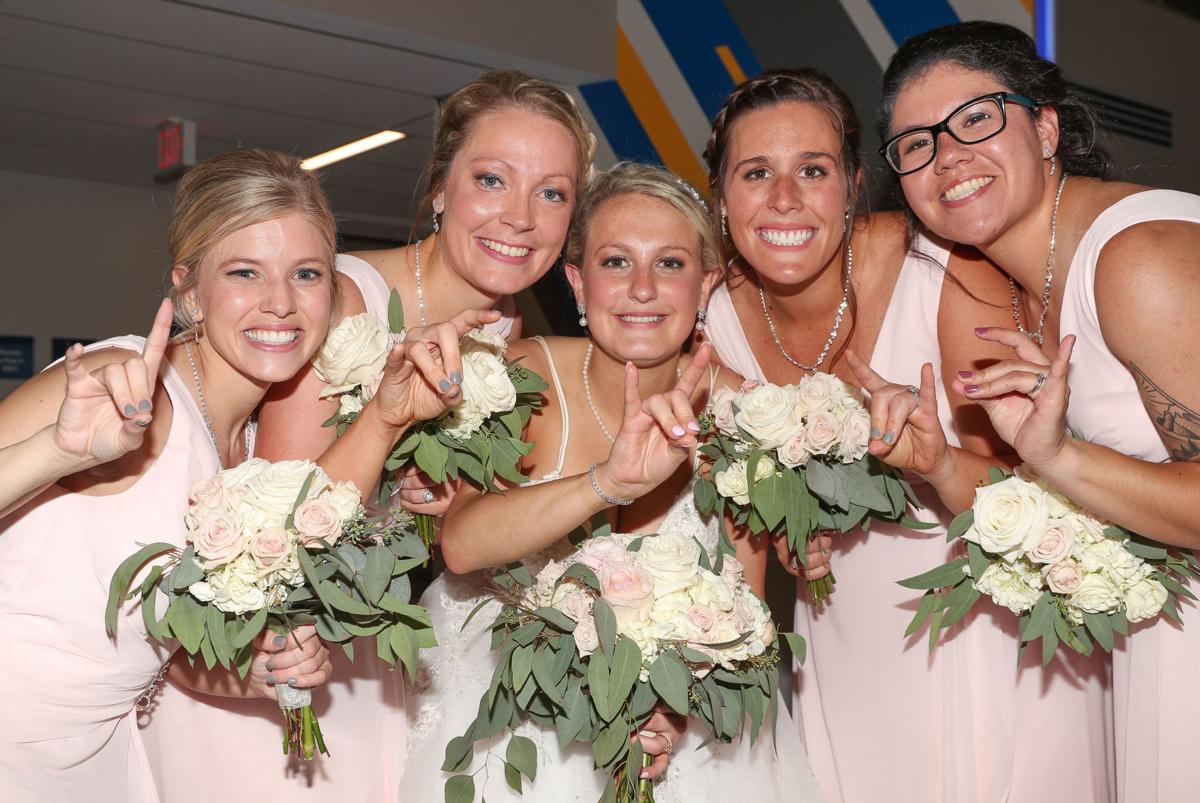 Megan Woeste, center, and her bridesmaids, from left, Bree Adams, Chelsea Leggott, Mackenzie Edgar and Fredde Reed all attended UNK and were members of the Alpha Omicron Pi sorority. They celebrated Woeste’s wedding Saturday during a reception at UNK’s Nebraskan Student Union.

Levi Streit and Megan Woeste celebrated their wedding Saturday in UNK’s Nebraskan Student Union after flooding forced them to move the reception from the Holiday Inn and Convention Center in Kearney.

Megan Woeste, center, and her bridesmaids, from left, Bree Adams, Chelsea Leggott, Mackenzie Edgar and Fredde Reed all attended UNK and were members of the Alpha Omicron Pi sorority. They celebrated Woeste’s wedding Saturday during a reception at UNK’s Nebraskan Student Union.

KEARNEY – Megan Woeste couldn’t hold back the tears as she walked into the Ponderosa Room inside the University of Nebraska at Kearney’s Nebraskan Student Union.

They were tears of relief.

“It’s emotional,” Woeste said Friday afternoon after getting her first look at the beautifully decorated space that would host her wedding reception the following evening.

Less than 72 hours earlier, the bride-to-be didn’t know where she and fiancé Levi Streit would be celebrating their big day.

Woeste, a Blue Hill native who attended UNK before graduating from the University of Nebraska Medical Center College of Nursing located here in 2015, was working at Kearney Regional Medical Center on Tuesday as water from the rapidly rising Turkey Creek began flooding the city’s south side.

Streit, a respiratory therapist with Frontier Home Medical, began sending her photos from the Holiday Inn and Convention Center – the venue they originally booked for their wedding reception. It didn’t look good.

Later that day, an equally emotional hotel employee called Woeste’s mother Sharon to confirm their concern. The building had sustained significant damage and wouldn’t be able to host the reception.

“My heart sank to the floor,” Sharon said. “I was speechless for the first time in my life. I didn’t know what to say. I was stunned.”

Woeste had the same reaction when she received the news. She and Streit were frantic.

“What else are you going to do? It’s a natural disaster,” Woeste, 26, said. “We were scrambling.”

“We were just calling everybody,” Streit, 24, added.

Following a recommendation from the hotel, one of those phone calls went to Jon Watts, vice chancellor for business and finance at UNK.

“Each call arrived with the voice of an overwhelmed bride, mother or father,” Watts said. “The story was the same, the hotel has flooded and they gave me your number.”

Watts had simple instructions for the panicked callers: take a deep breath and he’ll come up with a plan.

“The callback wasn’t always ideal, as a wedding reception for 450 on a basketball court isn’t exactly the dream of most brides, yet the relief for nearly every bride was instantaneous as they realized they had found an option,” he said. “It’s a powerful reassurance when you can tell a bride that UNK has several thousand employees and they all want to help make your special day a reality.”

At least three couples will celebrate their marriages on campus this summer, and UNK is also working with local hotel properties to relocate business meetings, trainings and other events.

Woeste and Streit were able to find enough rooms at the Holiday Inn Express south of Interstate 80 to accommodate their 190 guests, and they hired UNK’s Loper Catering to prepare a reception dinner of beef brisket, chicken and sides.

After a whirlwind week, they were married Saturday afternoon at the Merryman Performing Arts Center in Kearney before heading to UNK to party with family and friends.

“I’m really thankful for everything,” said Streit, a Lexington native. “The fact that this is Plan B and it still looks this good is awesome.”

Woeste, who met her four bridesmaids in UNK’s Alpha Omicron Pi sorority, was also impressed by her alma mater’s willingness to step up.

“It makes me tear up,” she said. “Kearney is just an amazing community. I’m overwhelmed by the generosity.”

As Mr. and Mrs. Streit prepared to celebrate for the first time as husband and wife, perhaps it was the DJ who best summarized a crazy few days.

“Let’s all appreciate that all of these dresses and tuxedos are completely dry right now,” he said.

‘That’s how Kearney people are’: Evacuees staying at UNK grateful for local response

KEARNEY — They were stranded, but they were still singing.

UNK opens doors to those impacted by flooding

Need help? Have questions about flood assistance? Stop by the one-stop Multi-Agency Resource Center in Kearney.

98 homes destroyed or heavily damaged in south-central Nebraska flooding, according to NEMA

LINCOLN — Ninety-eight homes were destroyed or suffered major damage in the July 8-12 flood, according to state damage assessments for south-c…