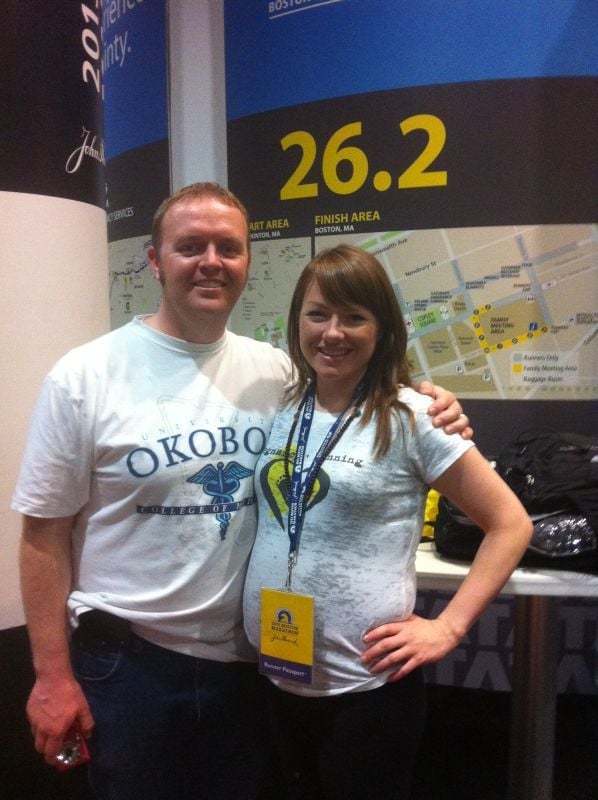 Morgan and Kathryn Merrill pick up Kathryn's race packet for the Boston Marathon. Kathryn was nearly a mile away from the finish line when two bombs exploded there Monday. Morgan and Kathryn were reunited later. Both were uninjured. 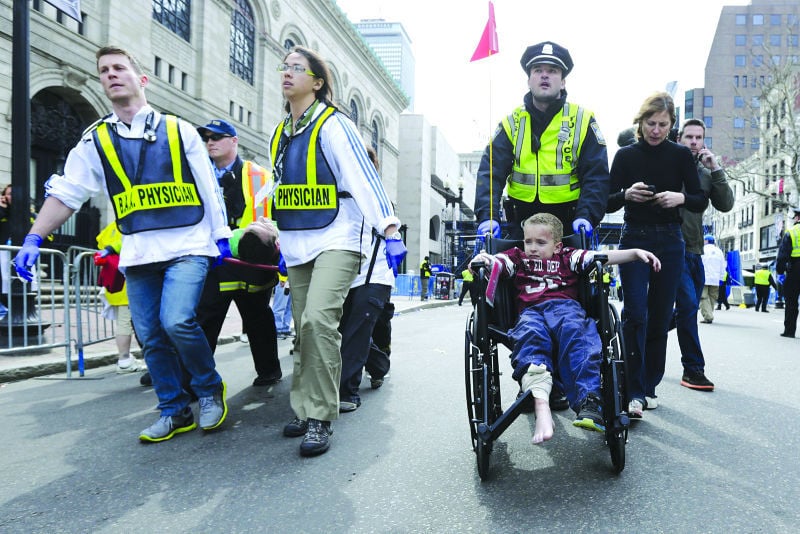 A Boston police officer wheels an injured boy down Boylston Street as medical workers carry an injured runner following explosions Monday during the 2013 Boston Marathon. Two explosions shattered the euphoria at the marathon’s finish line and sent authorities out on the course to carry off the injured while the stragglers were re-routed away from the smoking site of the blasts.

Morgan and Kathryn Merrill pick up Kathryn's race packet for the Boston Marathon. Kathryn was nearly a mile away from the finish line when two bombs exploded there Monday. Morgan and Kathryn were reunited later. Both were uninjured.

A Boston police officer wheels an injured boy down Boylston Street as medical workers carry an injured runner following explosions Monday during the 2013 Boston Marathon. Two explosions shattered the euphoria at the marathon’s finish line and sent authorities out on the course to carry off the injured while the stragglers were re-routed away from the smoking site of the blasts.

BOSTON — Kathryn Merrill believes a miracle kept her, her baby, her husband and friends safe during the Boston Marathon bombing Monday.

Merrill, a 2001 graduate of Kearney High School and 2005 graduate of the University of Nebraska at Kearney, currently lives in Wagner, S.D.

The longtime runner traveled to Boston with her husband, Morgan, and two friends, Emilie Murray and Chanell Wilmer.

“I was attempting to run my marathon approximately 4:05 to 4:30 while 24 weeks pregnant, but it didn’t go according to plan,” she said in an email interview with the Hub. “I literally had to stop at a porta potty about every two miles because this baby was right on my bladder.”

Merrill tried to increase her pace, but the baby forced her to slow down.

“I remember, I asked a police officer what time it was, after leaving a porta potty at approximately 24.5 miles and he said seven minutes to 3 p.m., and I remember thinking, ‘I’m supposed to already be at the finish line based on what I had told my husband and my two friends who came to see me finish,’” she said.

Merrill didn’t know that two bombs had exploded near the finish line. She kept running, hoping she could get to the finish so her husband and friends wouldn’t have to wait too long.

“At mile 25.5, I ran into a wall of people, just masses, some walking back toward me on the course, many crying, and I thought, ‘What is wrong?’ and then I thought, ‘Did I take a wrong turn?’ Because, literally, it was like the race just stopped, and no one could run because there were so many masses of people that were just stagnant,” she said.

Merrill was sure that she was off course and was running into people who had already finished the race.

But when she asked someone walking toward her what happened, they told her a bomb had gone off at the finish line.

Merrill would later learn that three people were killed and more than 170 victims sought medical help at Boston hospitals.

“I was just in shock because I was already so tired from running, plus being pregnant, I was still in race mode, thinking I could get to the finish line so I could finish the race. It sounds so crazy now, but I remember thinking, ‘I’ve got to get to the finish’ just because that was all I had been thinking for the last eight miles.”

Merrill walked into a small park near a bridge and asked someone to borrow their cell phone to call her husband. She was able to get through briefly to tell him she was OK before the phone call ended.

Although there was no cell phone service, Merrill was able to text her husband to arrange a meeting place.

“I was walking home (to the hotel), approximately a one-mile walk, when some local people stopped me to ask if I was OK, and I broke down crying, saying I didn’t know where my husband was. They were most helpful, texted my husband for me and gave me a ride to my hotel,” Merrill said.

“I got into my room and knelt down and cried, because my husband was not in the room. I was cold and extremely tired and just wanted to see him to really know that he was OK, not just hear his voice for 10 seconds before the phone shut off. I had never received a text back from him confirming that he had received my texts, and I didn’t know when I would see him.”

“I just hugged him and cried — just emotionally and physically drained,” she said.

She learned that her husband wasn’t at the finish line when the bombs exploded. He thought the crowds were too thick, and he couldn’t see the finish line. He was waiting for Merrill two blocks away when he heard the explosion.

Their friends, Murray and Wilmer, were waiting for Merrill at the finish line when the bomb exploded, but they were unharmed.

“We ran downstairs and I gave them both a hug and we all just cried, I could not believe they had been at the finish when the bomb deployed, and that they were OK. I was so grateful for that miracle,” she said.

“I thank God for the many miracles that happened today, first that the four of us were OK, second that the baby is OK and that he sat right on my bladder to slow me down.”

BOSTON (AP) — Two explosions at the finish line of the Boston Marathon Monday killed three people and injured dozens more. An at-a-glance look at the facts in the case:

Two bombs exploded about 10 seconds and 100 yards apart at about 2:50 p.m. Monday in Boston’s Copley Square, near the finish line of the Boston Marathon. Three people were killed, including an 8-year-old boy, and more than 140 were injured. The explosions occurred four hours into the race and two hours after the winners had crossed the finish line, but thousands of runners were still on the course.

The FBI took charge of the investigation into the bombings, serving a warrant late Monday on an apartment in the suburban Boston town of Revere and appealing for any video, audio and still images taken by marathon spectators. No arrests had been made, and authorities weren’t commenting about suspects.

President Barack Obama vowed that those responsible will “feel the full weight of justice.” The president was careful not to use the words “terrorism” or “terrorist attack” in his remarks, but a White House official, speaking on condition of anonymity because the investigation was still unfolding, said the attack was being treated as an act of terrorism.

The area around Copley Square remained closed Tuesday morning, as did exit ramps from major highways to the area. The Federal Aviation Administration barred low-flying aircraft within 3.5 miles of the site. Other cities also beefed up security in response to the bombing and the Secret Service expanded its security perimeter around the White House.