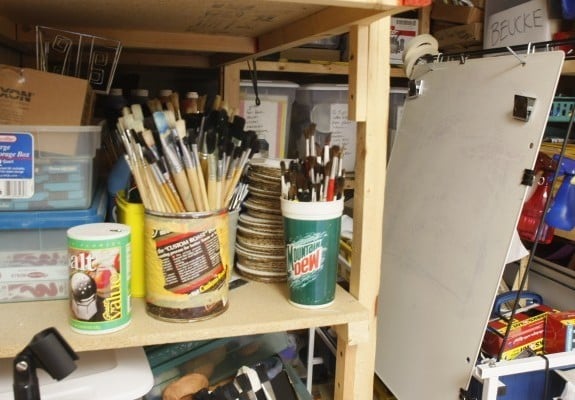 The art teacher at Bryant Elementary School uses a closet to store her supplies and takes a cart to each class she teaches. Bryant and other schools in the district lack space for many of their staff members. 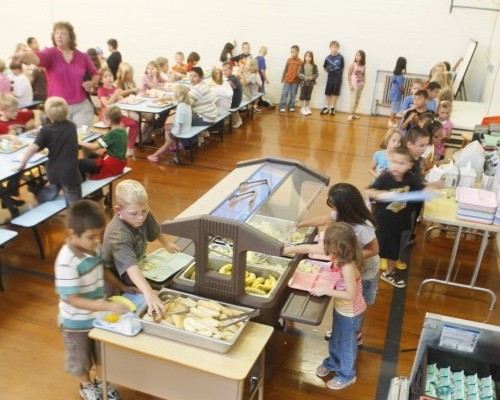 Students at Bryant Elementary School go through the lunch line and eat in the gym. Bryant’s cafeteria is too small to seat all of the students for lunch.
1 of 2

The art teacher at Bryant Elementary School uses a closet to store her supplies and takes a cart to each class she teaches. Bryant and other schools in the district lack space for many of their staff members.

Students at Bryant Elementary School go through the lunch line and eat in the gym. Bryant’s cafeteria is too small to seat all of the students for lunch.

Students eat lunch in the gym.

The teacher's lounge is now a classroom.

Closets are used as testing spaces for students with special needs.

"We've taken storerooms and closets and converted them into meeting rooms or testing rooms," Superintendent Brian Maher said. "We've converted spaces that were never intended to be student-used spaces, and we're using them for student use now."

The lack of space and a steady increase in enrollment led the KPS Board of Education to approve a $45 million school bond referendum.

In the Sept. 15 vote, district residents will vote on a $2 million tax levy override to staff the new schools.

Many of the elementary schools need roof and window repairs, don't have central air conditioning and still rely on window air-conditioning units.

"We've got a lot of space that's taking on some age, but we need it," Maher said. "We need to give it some tender-loving care and keep it up to speed. So, we need to renovate."

In addition to aging facilities and an increase in enrollment, many schools have gained programs.

"When the building was built, it equipped the kids that came to the building," Bryant Elementary School Principal Mark Johnson said. "But, as time went on, I think what started to happen was programs started at Bryant."

Bryant serves a large population of students from low-income families, which makes the school eligible for funding for additional programs such as English language learning classes and programs for students who need more support in reading.

Bryant, at 1611 Ave. C, needs the most renovation. Needs include new classrooms for kindergarten, special education and ELL, and an expansion of the kitchen and cafeteria.

When Bryant incorporated all-day kindergarten into the school, classrooms were shuffled and half the cafeteria was renovated and became the music room.

The cafeteria is now so cramped for space tables must be set up in the gym, which is next to the cafeteria, to accommodate all students during lunch.

Although setting up tables in the gym reduced the squeeze in the cafeteria, it began interrupting gym class.

"That bumped into P.E. times and he (the P.E. teacher) was trying to conduct P.E. when we had lines of kids coming through here. It was just a mess," Johnson said. "So, we're trying to just use what we have and change our schedule and be flexible."

Johnson said Bryant staff changed the lunch routine many times this school year to try to figure out a way to fit all the students in the lunchroom and not interrupt physical education.

The social worker shared an office with the school nurse, but she was forced to leave every time a student visited the nurse. The school social worker also worked in the counselor's office and the principal's office.

"We needed to find a place for her to talk with kids in a confidential way," Johnson said.

Teachers also were forced to give up the teacher's lounge to make room for ELL classes.

A workstation that housed a copy machine, paper and other tools became the teacher's lounge. The copy machine and supplies now sit in the hallway.

Bryant is also unable to have its preschool on-site because of lack of space. Bryant preschool is taught in the Head Start building, but the teacher does her planning at Bryant in a cubicle in the library.

"Flexible. That's the big word with the Bryant staff. Hugely flexible," Johnson said. "As they keep getting things thrown at them, they just find a way to make it work."

Central Elementary School, which also serves a large population of students from low-income families, faces just as many space problems as Bryant.

"None of those were even on the radar when this building was built," Central Principal Theresa Schnoor said. "It's not even that we have to find a place for them, but finding suitable rooms for them because the building was built with the need for regular classrooms as opposed to those specialized environments."

A social worker's office is in a former kitchen supply closet. Life skills classes are taught in former supply closets. Hallways between classes are set up for instruction. The teacher's lounge is in the old shower room in the basement.

"I can't think of a nook or cranny in our building that is not used for instruction," Schnoor said.

Central also uses the Whittier Administration Building for instruction. Preschool, art and music are taught in the building, which is west of the elementary school.

"The thing that we find as we increase our need to use Whittier, is the fact that it is not part of the school. So, whoever is over there feels isolated," Schnoor said. "If you've got a classroom or a grade-level there, they don't experience the overall instructional climate that everyone else does."

Elementary schools across the district face many of the same issues as Bryant and Central.

Maher said renovating the schools is the only way the elementary schools' problems will be solved.

"We've really got Band-Aids on the problem right now," he said.

A public forum on the Kearney Public School District's school bond and levy override referendum will be 7 p.m. Sept. 8 at Kearney Community Theatre at 83 Plaza Blvd.

The Senior College of Central Nebraska will sponsor the forum.

Representatives from the Committee For Our Students and a Positive Future, the Kearney School Board and KPS administration will explain the bond and levy override proposals and will answer questions.

Refreshments will be available.

More information is available from Stan Dart at 224-6432 or by e-mail to msdart@charter.net.

Learn what the $45-million school bond would pay for, where the new elementary schools could be built and why the bond doesn't include renovating Kearney High School.

I attended Sen. Ben Nelson's public meeting on Aug. 24 in Kearney. The senator stated he does not want to add to the national deficit. Well, i…

Citizens committee forms opinion separately from board: Bond is necessary

KEARNEY - As the election for a $45 million school bond approaches, almost everyone wants to know what the district will pay for with the money.

I don't know how many people are going to figure out what their property taxes will be if the Kearney school bond passes. Just remember this y…

KEARNEY - Supporters of the Kearney Public Schools' $45 million school bond say Kearney's economy is strong and the bond will be a good investment.

If $45M bond isn’t passed, KPS says it will have larger class sizes in the future using same small buildings of today

KEARNEY - The roar of the chatter overpowers the instructions on the intercom.

KEARNEY - A public forum on the Kearney Public Schools school bond referendum and levy override will be today.

‘No’ to bonds — costs too high

Last year the KPS Board felt the biggest need was a new high school. This year grade schools are more important, plus some updating. Just wond…

I don't typically feel the need to write letters to the editor, but after reading some of the naysayer comments from the Sept. 3 Hub, I could …

Invest in a child

As a Kenwood parent, I have seen the urgent needs of our school system. I know most bond opponents do not want to pay more in taxes, but I enc…

As staff in Holdrege Public Schools, we feel compelled to address three reasons to encourage you to vote "yes" in Tuesday's bond election.

When Holdrege voters go to the polls, they need to remember why we voted for a new middle school. Was it a mistake?

Results of the KPS bond election