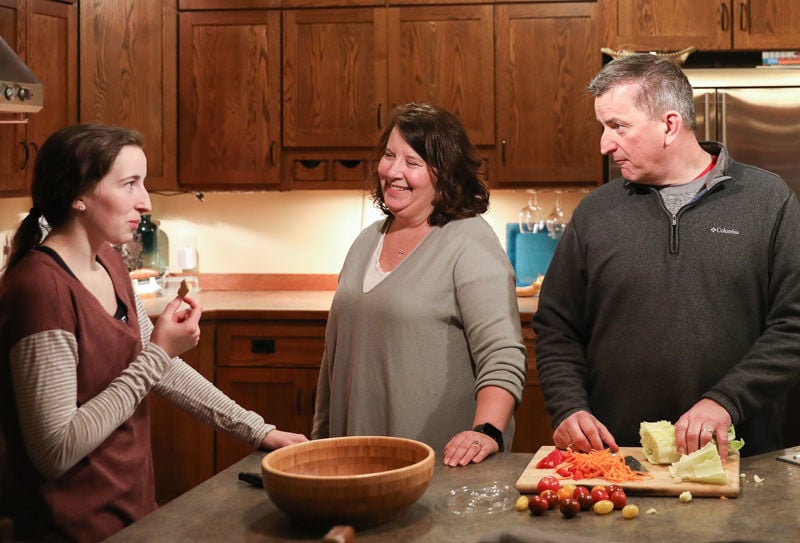 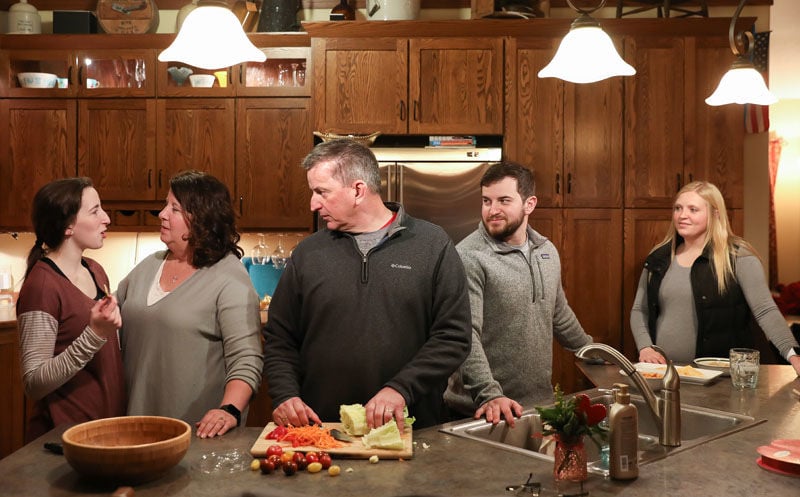 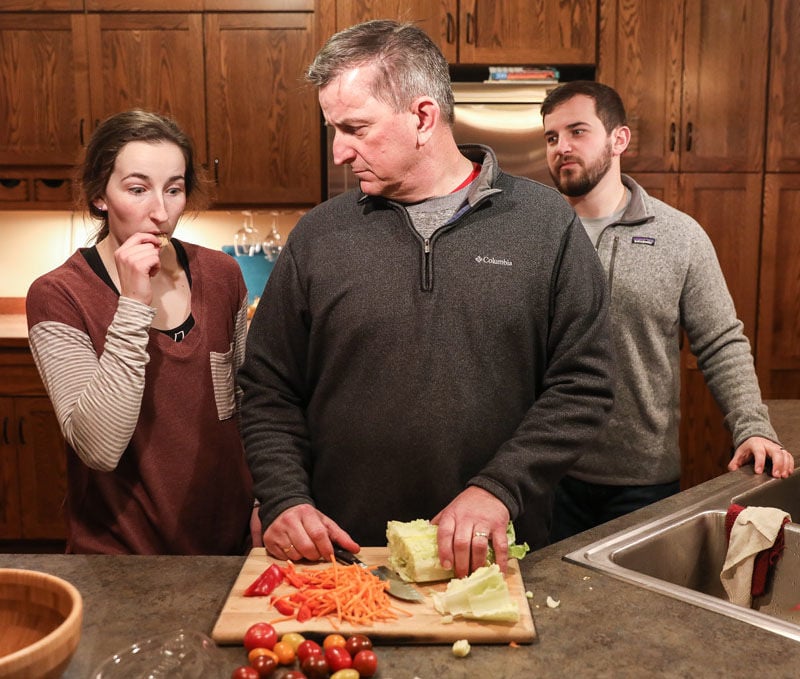 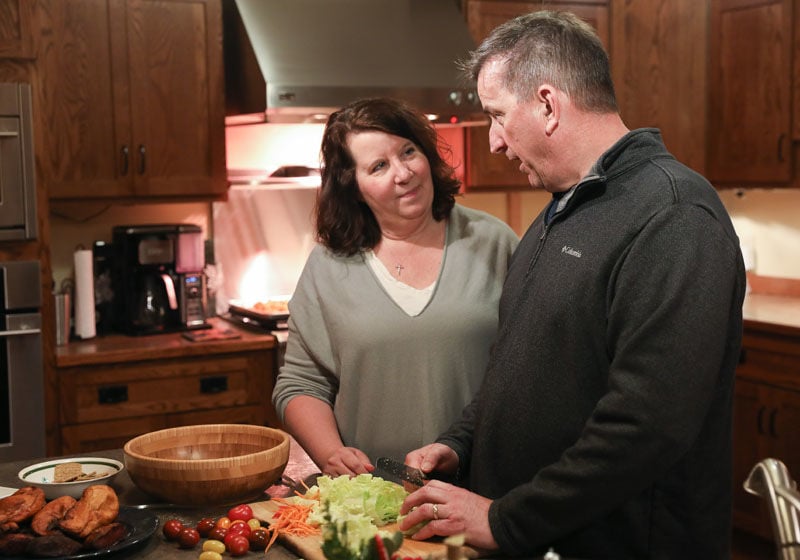 This is the second of two stories. In Saturday’s Kearney Hub, Denise talked about Shayne’s suicide, his miraculous recovery and grueling efforts to learn how to brush his teeth and dress and more so he could return home.

Following his April 8, 2018, gunshot wound to his right temple, he spent five months at CHI Health Good Samaritan and two rehabilitation centers relearning such basics as the alphabet, how to squeeze toothpaste out of the tube and how to walk again.

Still, his wife Denise was shrouded in fear when she brought him home on Aug. 23, 2018.

“The scariest moment was walking out the doors of QLI Living in Omaha and coming home and trying to figure out all the pieces I had to have in place to keep him safe, help him grow and find wonderful people who were willing to drive 30 minutes outside of Kearney to care for him every day,” Denise said.

Life was changed for her and for Shayne, who had been chairman of the Pleasanton school board for 16 years and youth sports coach. “Some days are absolutely crippling, but you always have hope for the next day,” she said.

Prior to Shayne’s release from QLI, Denise had called CareTech, a company that employs caregivers. She posted notices on Facebook, talked to friends and more, but it took 15 months before CareTech was able to find some permanent help. “The CNA (certified nursing associate) shortage is very challenging for families,” Denise said.

“She knew us a bit, so when we were asking around for help, she felt like it was the right place to be at the time,” Denise said.

The work was hard.

Rachel helped Shayne do simple tasks like lifting his arm to take a drink and putting toothpaste on his toothbrush. “It wasn’t anything she had ever done before, but she felt called to help us,” Denise said. “She was a beautiful angel.”

After a year, Rachel returned to Good Sam so she could get health benefits.

“It was a revolving door after that,” Denise said. “People didn’t show up, or people never showed up. Weeks would go by, and no one would call with any interest in the job. It was tough for me.” Friends asked around, too. They kept praying.

Hellrich comes Monday through Wednesday and part of Thursday. She was hired through Independent Rising, a company in Grand Island that hires caregivers to help families like the Zwieners.

Last fall, through CareTech, Denise found Brenda Chop of Ravenna to come Thursday afternoons and Fridays. Denise now works four 10-hour days at BCCP and takes off Fridays to organize Shayne’s care plan, to take him to medical appointments, to purchase medical supplies, to schedule therapies and much, much more.

Chop arrives early to help Shayne dress. “He’ll have a sock in his hand, and he’ll just get stuck,” Chop said.

Since the frontal lobe of Shayne’s brain was destroyed by the gunshot, he lost what Chop called “connectors” in his brain. “He has A, but he lost B in his frontal lobe, so he can’t connect to C,” Chop said. “The therapist told us that if you lose a connection, you need to retrain the brain. We work hard helping him overcome these things.”

He forgets some routines but has retained others.

“He struggles to get dressed, but after he gets dressed, the rest of the day goes pretty good,” Chop said. “Denise had asked us to cut up a watermelon, and he put the watermelon on the counter, sharpened the knife and cut it up like he’d done it a thousand times. He cooked four eggs this morning. He made chicken breasts for supper.”

Denise added, “He’s always been the most phenomenal cook. I come home to a home-cooked meal every night.” He even does the dishes.

On weekends, Denise relies on family, including Shayne’s four siblings, who live in Kearney and Omaha. “When we hit crisis moments, we all figure out how to make it work,” she said.

The couple has known each other since childhood.

When Denise was in first grade at Pleasanton, little Shayne, then a kindergartner, would watch her through a window between their classrooms.

He told a friend, “She is going to be my wife someday.”

They both dated others in high school at Pleasanton, but married a few years after college graduation.

“He was always a very caring, funny person who really enjoyed life. I truly think that’s why he has so many wonderful friends,” Denise said. She said he is the extrovert; she is the introvert.

He enjoys tinkering with things that need to be fixed. QLI Living taught them to build his therapies around things Shayne loves to do because the brain keeps a memory of how the body’s muscles work.

At Madonna Rehabilitation in Omaha, where he spent four weeks following his initial stay at CHI Health Good Samaritan, he signed his name to a Mother’s Day card and made a flower arrangement. For the first time, he was able to stand up unassisted and hug Denise.

“I’m starting to see the beautiful pieces emerge again. I didn’t realize how much stress and anxiety were weighing on his mind. He reminds me of the 16-year-old boy I fell in love with,” she said.

During the week, Hellrich takes Shayne to therapy sessions and assists with “hand-over-hand things he needs assistance with.”

Shayne goes to Delay the Disease, a Parkinson’s disease group, for exercises and therapy at the Kearney Family YMCA. He lifts weights in the basement. He goes for walks and does laundry. He cannot drive, but last summer, he began mowing the lawn on his riding mower.

It has been difficult, but Denise can see progress.

“Routine is so important to retrain that brain. The more routine, the more he learns,” she said.

“The first week at Madonna, he just started swing dancing,” she said. That was something the couple loved to do. “That brought us closest to tears.”

He and Denise eat out.

They go to daughter Marinna’s track meets and basketball games at Pleasanton High School. On Sunday, he cooked at the St. Mary’s Parish Spaghetti Feed in Pleasanton.

He reads the Kearney Hub every day and watches a few TV talk shows. Marinna, 16, has taught him how to hug. The couple’s other two children, Shelena, 22, of Lincoln and Kaden, 26, who lives in Kearney with his wife Macy, stay in close contact.

“We try to figure out what brings him enjoyment and weave that into every one of his days,” Denise added.

Denise describes their life now as “a patient, thoughtful routine. We take a greater joy in every moment. We’ve slowed down to smell the flowers. The holidays were beautiful. Our extended family slowed down to be with us,” she said. With assistance, Shayne bought and wrapped his own Christmas presents to give.

“I wouldn’t say it’s been easy, but we really try to spend time together and check in with each other,” Denise said. The support of her family was, and is, immeasurable.

Little by little, she sees rays of the old Shayne poking through, like his sense of humor.

“He wants to grab charcoal and run to town to cook burgers like he used to do for tailgates. On Saturdays, he wants to grab basketball shoes and ref kids games. He still talks about that. I’m hopeful one day that will all come back.”

He and Kaden wrestle and play basketball. Shayne surprises his family with random Facetime calls. He may call Denise at work to ask what he can start for supper. “The first time he called, I sat in my office and cried,” Denise said.

Shayne, who had sat quietly throughout this interview, said, “I’m gonna buckle up and keep riding.”

Days still can be a challenge, Denise said, but “our faith in God is what carries us from day to day. With that, family and love, that’s our base.”

“We still love the things we’ve always done — going out with friends, having people over to eat, going hunting in the fall, working in the yard, house projects. Just very average things. I want to let people know we’re still Shayne and Denise Zwiener.”

Her husband shot himself in the head. He survived. She says it was 'a series of miracles.'

'It is so important to talk about anxiety, depression and suicide,' wife of survivor says