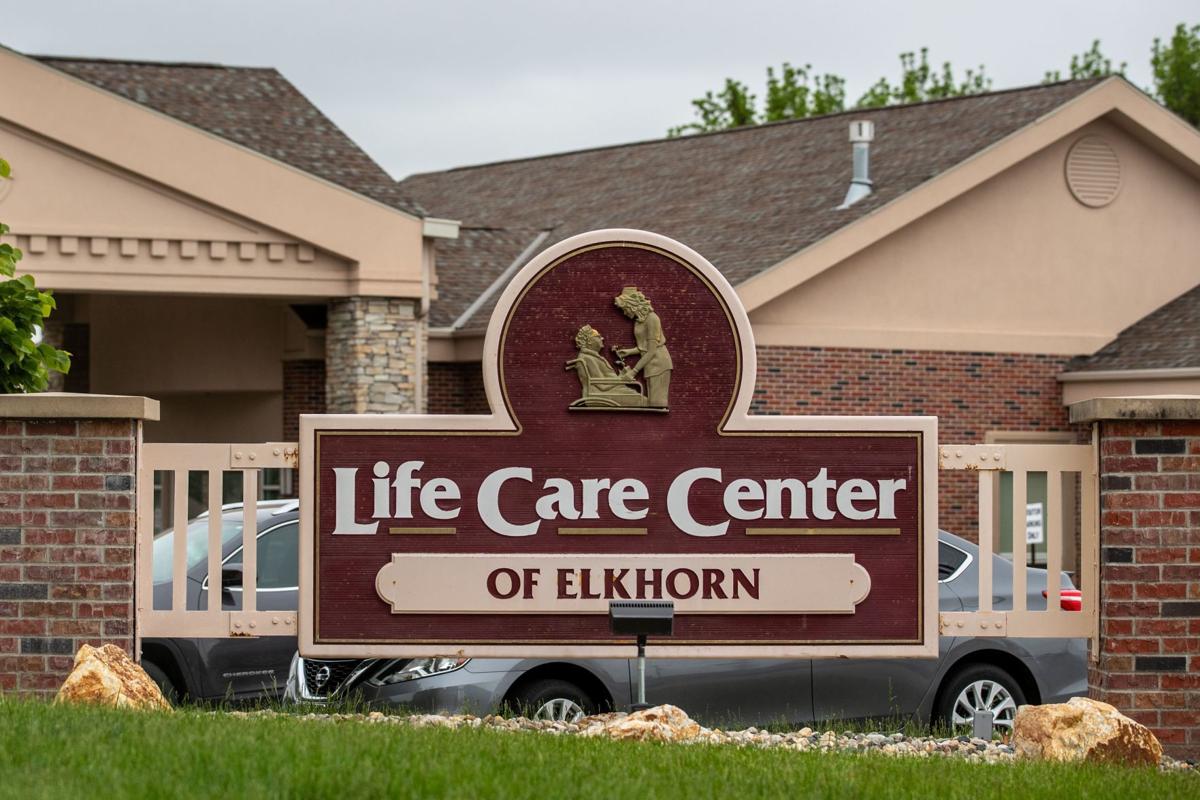 All 79 residents of the Life Care Center of Elkhorn were tested for coronavirus on May 11, and 52 were found to be infected. Five have since died. Well before the outbreak, federal inspectors found deficiencies at the facility, and in 2019, Nebraska HHS placed its license on probation for 180 days. 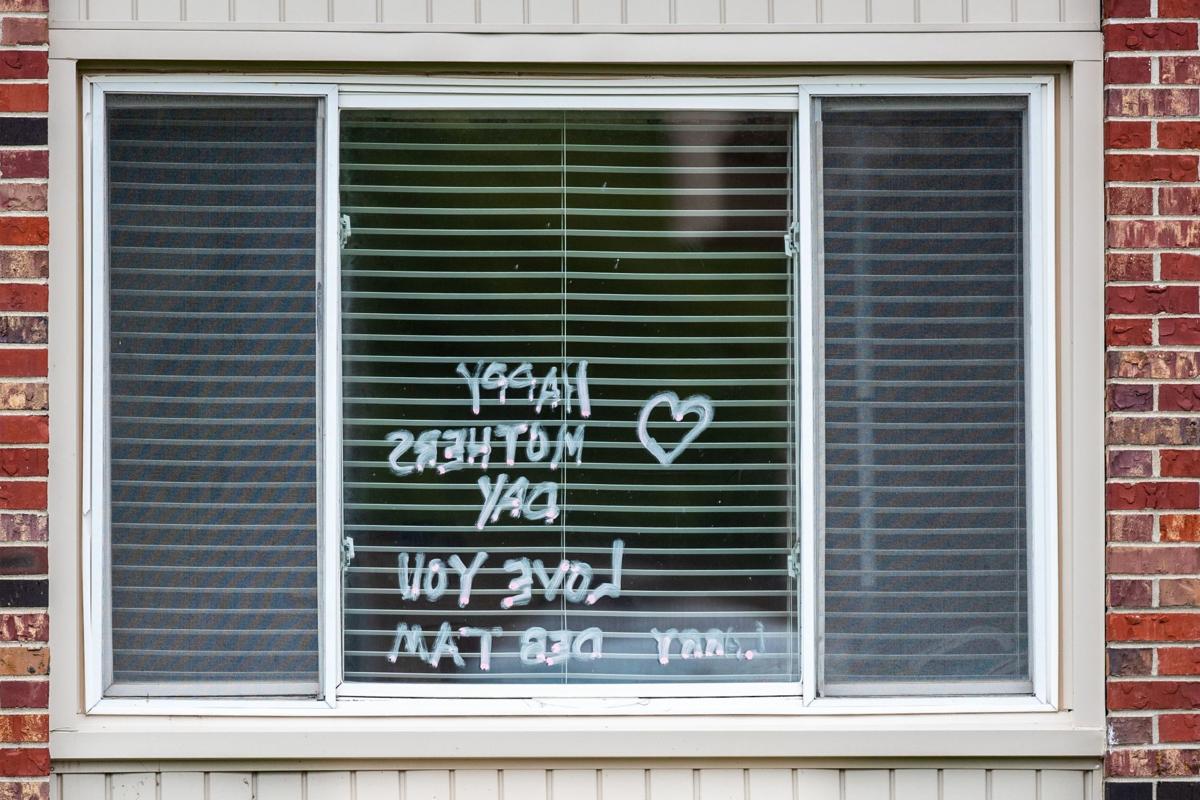 A Mother’s Day message on a window at the Life Care Center of Elkhorn, which is owned by the chain that also owns a facility in Kirkland, Washington, where the first major COVID-19 outbreak at a care center occurred in early March. 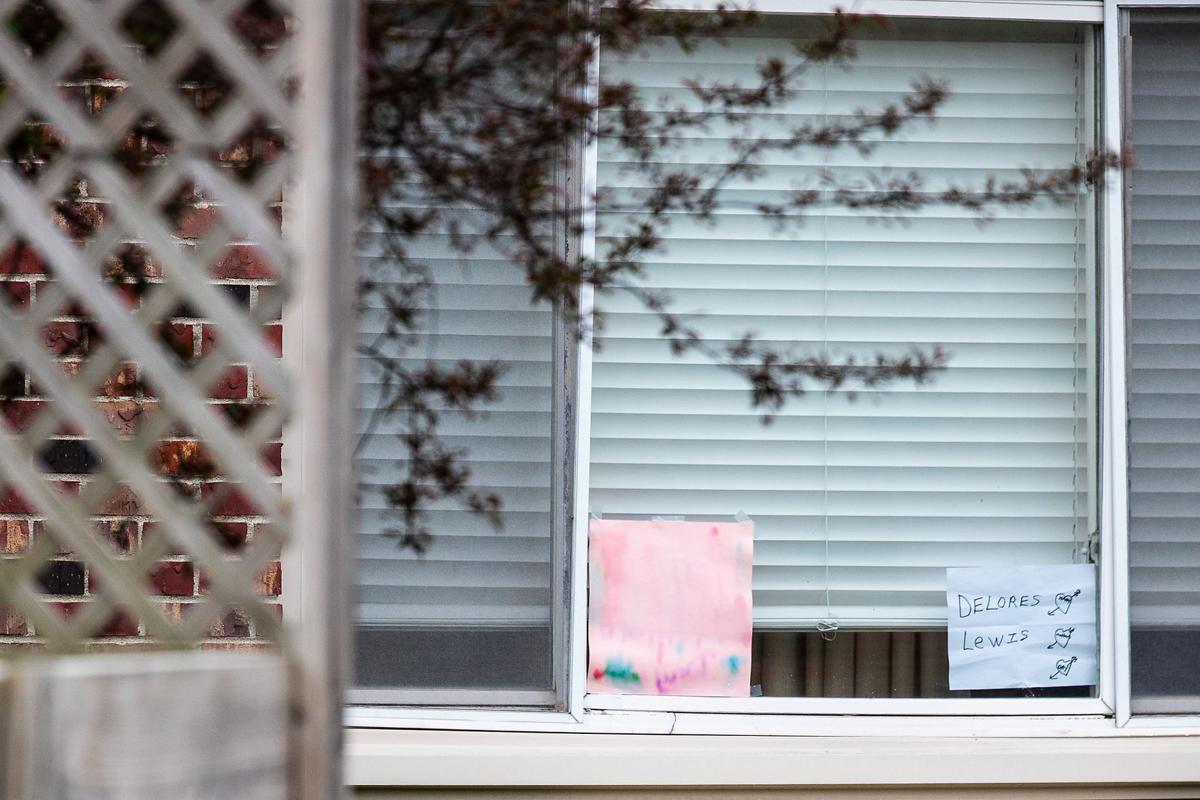 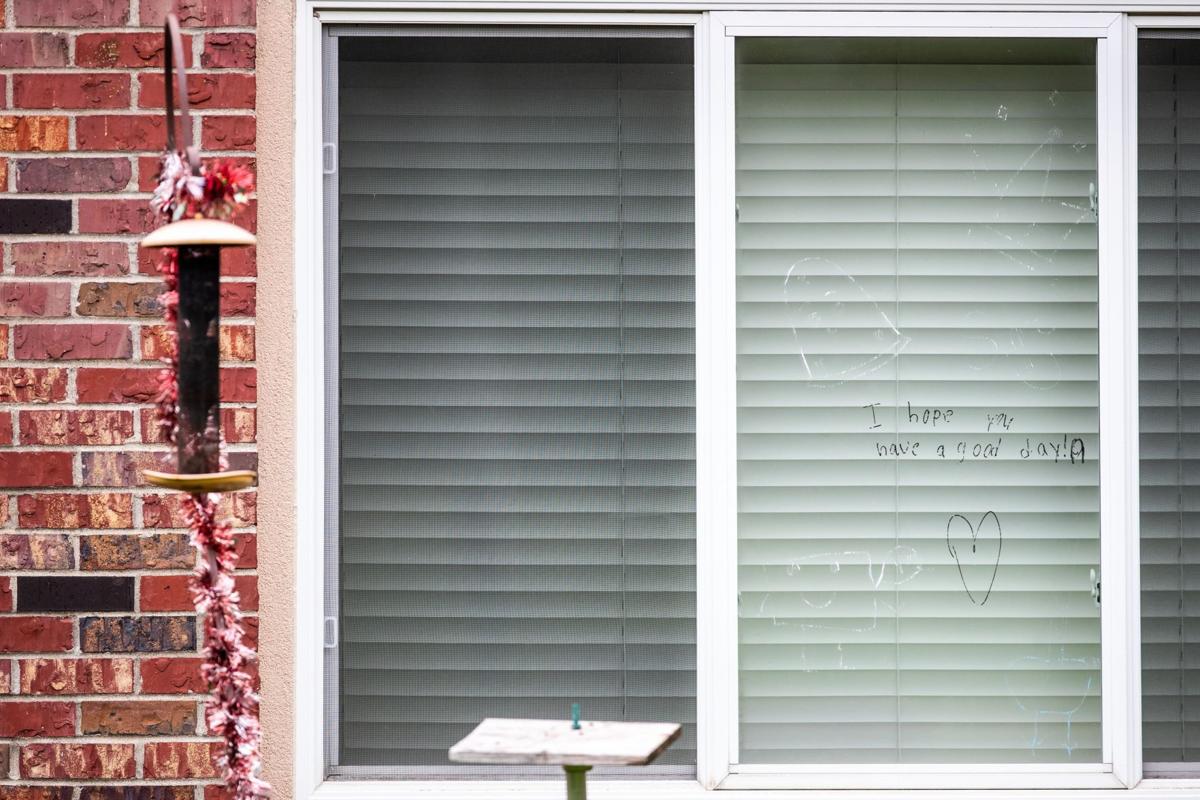 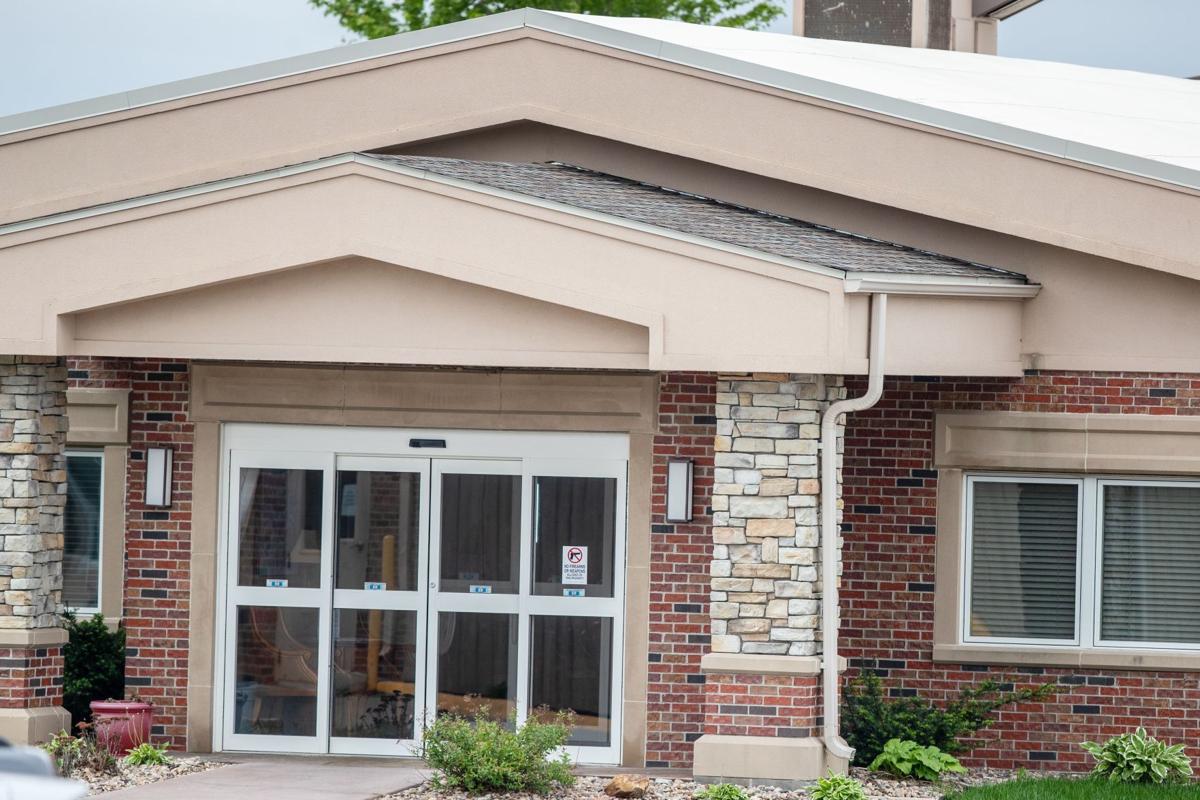 Life Care Center of Elkhorn, located at 20275 Hopper St, has 52 residents who have tested positive for the coronavirus as of Wednesday, May 20, 2020.

All 79 residents of the Life Care Center of Elkhorn were tested for coronavirus on May 11, and 52 were found to be infected. Five have since died. Well before the outbreak, federal inspectors found deficiencies at the facility, and in 2019, Nebraska HHS placed its license on probation for 180 days.

A Mother’s Day message on a window at the Life Care Center of Elkhorn, which is owned by the chain that also owns a facility in Kirkland, Washington, where the first major COVID-19 outbreak at a care center occurred in early March.

Life Care Center of Elkhorn, located at 20275 Hopper St, has 52 residents who have tested positive for the coronavirus as of Wednesday, May 20, 2020.

OMAHA — An Omaha nursing home struggling to control a deadly coronavirus outbreak has been dinged by state and federal inspectors in the past — and was visited by a state inspection team on Monday.

In the three weeks since the Life Care Center of Elkhorn discovered its first coronavirus case, the virus has spread quickly within the facility, among both residents and staff.

Five residents have died since May 15 and 10 are currently hospitalized, according to a Wednesday update from the care center.

On Monday, the facility announced its first two deaths; three more were reported Wednesday. Sixty-one residents remain at the facility.

“We immediately separated all residents who are positive into their own area of the building,” the facility said in a statement. “We are doing everything we can to provide the best care for residents and to safeguard staff.”

Twenty-six staff members, out of 140, have been infected, and 24 are currently out sick. Fifty-nine employees tested negative.

That means 78 people total with ties to the facility — staff or residents — have contracted the virus.

“We mourn the loss of our residents,” the statement said. “We are deeply saddened that despite our best efforts, this deadly outbreak has reached our building. We have been following all guidelines from both federal and state health authorities.”

The center is owned by Life Care Centers of America, a national chain that also owns the facility in Kirkland, Washington, where the first major outbreak of COVID-19 at a long-term care facility occurred in early March.

A spokeswoman from the Nebraska Department of Health and Human Services confirmed that a team inspected the facility on Monday.

Spokeswoman Leah Bucco-White said employees from the department visited the nursing home “and conducted an inspection based upon information received by the department.”

“DHHS is in the process of reviewing the findings,” she said.

A team from the University of Nebraska Medical Center/Nebraska Medicine’s National Emerging Special Pathogen Training and Education Center also visited the facility, along with a state infection prevention specialist.

HHS, UNMC/Nebraska Medicine and the Douglas County Health Department are working together “to help protect the health and safety of those living and working at the facility,” an HHS press release said.

For now, no plans have been made to move residents from the facility, unless they need more care at the hospital, said HHS and Michelle Yosick, the facility’s executive director. When an outbreak struck a Blair assisted living facility in March, 17 residents were moved to an unused floor at CHI Health’s Midlands Hospital in Papillion.

Yosick previously said the facility has enough workers to care for its residents, even with some sidelined by COVID-19.

The coronavirus has swept through nursing homes across the country and throughout the state, jeopardizing older or sicker residents who are more vulnerable to the virus and complications from it.

Tuesday, Nebraska Gov. Pete Ricketts said 89 long-term facilities in Nebraska have been affected, with either residents, workers or both testing positive for the virus.

Sixty-two residents in nursing facilities have died, accounting for about half of the state’s coronavirus-related deaths, and 380 have contracted COVID-19. On the staff side, 280 employees have tested positive.

Ricketts has said the state will not name specific facilities with outbreaks.

The Elkhorn facility is certified for 135 beds, although the current patient count shows that it’s about half-empty. And it has gotten in trouble with state and federal inspectors before.

Inspection reports for the facility from 2018 and 2019, from the U.S. Centers for Medicare & Medicaid Services, detail a number of deficiencies, including complaints about infection control, wound care and the mishandling of an investigation into a sexual assault of a female resident in February 2019.

After a resident was admitted to the hospital, injuries were found that suggested she was assaulted.

The report notes that police were notified but does not provide details about the criminal investigation.

That incident prompted the state HHS to place the facility’s license on probation for 180 days, starting in March 2019, records show. During that period, no new residents or patients could be admitted without HHS approval.

Probation was lifted in October 2019. The federal report notes that the facility instituted several measures to protect residents, including not allowing male staffers to care for female residents unsupervised in patient rooms or other nonpublic settings.

In June 2019, inspectors found infection control problems: a nurse did not wash his or her hands or use hand sanitizer before dispensing medication or testing residents’ blood sugar. A glucometer, which typically uses a finger prick to test blood sugar, was used on multiple residents without being cleaned off in between tests.

On the federal group’s Nursing Home Compare website, which allows people to look up nursing facilities, the overall rating for Life Care Center of Elkhorn was two stars — below average. Life Care Centers of America, which includes more than 200 facilities in 28 states, operates another facility in Omaha near 60th Street and Hartman Avenue with a one-star rating.

A Life Care Centers of America spokeswoman did not respond to questions about the inspection reports and ratings, but in the Wednesday update, the facility said “our staff have been vigilant to practice all necessary procedures of infection control.”

The June 2019 federal inspection turned up six health citations — lower than the state and national average. But a February 2018 inspection resulted in 32 citations.

In March 2018, the Nebraska HHS put the facility’s license on probation status for 90 days for not helping a resident go to the bathroom, resulting in accidents. Eleven regulation violations were noted, and the facility was ordered to submit several plans and reports.

Probation was lifted in July after the facility met the state’s requirements, records show.

An investigation by the Washington Post found that over the past six weeks, as the nationwide death toll among the elderly soared, government inspectors discovered breakdowns in infection control and prevention in at least 10 Life Care nursing homes that underwent COVID-19 inspections overseen by the federal group.

At other Life Care nursing homes, inspectors have since discovered staff members who did not wash their hands or enforce social distancing guidelines, according to the inspection reports. At one home in Denver on May 5, staffers left open the door of an isolation room, allowing a patient with COVID-19 to slip into the hallway without a face mask and sit next to a room with two healthy residents.

The Tennessee-based Life Care has said that no amount of preparation could have kept the virus at bay and that administrators worked early and often with health authorities to contain the spread of infection.

Since the outbreak in Kirkland, the privately owned company has seen at least 2,000 cases and 250 deaths among residents and staff, according to a Post tally of state data and local media accounts. Five Life Care nursing homes have experienced outbreaks of 100 or more cases.

There is no comprehensive national data available to determine whether the rate of infections and deaths at Life Care facilities is higher than at other chains — or how often other chains have been cited for violations after the pandemic began.

Two residents of COVID-stricken Life Care of Elkhorn have died

As of Friday afternoon, about two-thirds of the state's coronavirus deaths have been among long-term care residents, who are typically older and have other medical conditions.

Ricketts 'very pleased' with TestNebraska despite not meeting test goals

The testing program, set a Utah group, had set a goal of averaging 500 tests per site, and ramping up to 3,000 tests per day, at six mobile sites, by the end of May. Ricketts on Wednesday indicated that the program may not reach that goal.

Omaha couple in their 80s, married for 60 years, die hours apart of coronavirus

The Omaha long-term care facility also said in a press release Sunday that eight residents who previously tested negative for the virus have now tested positive.