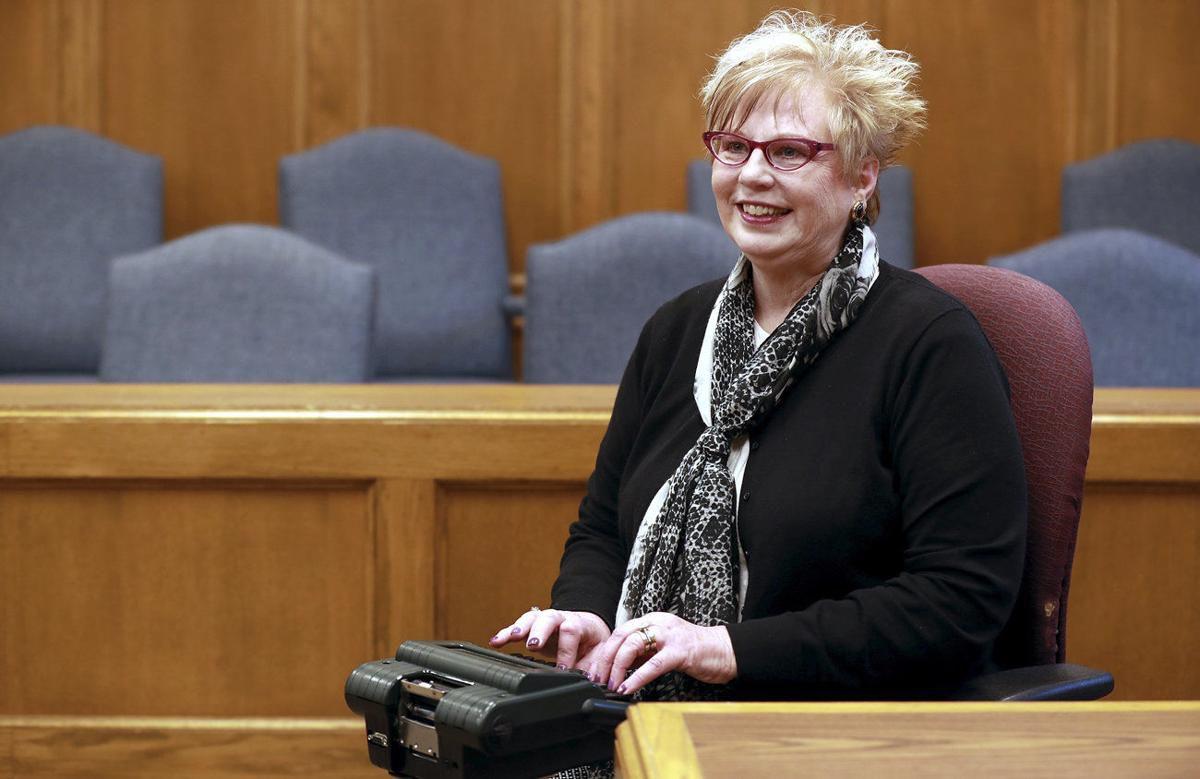 Court reporter Lori Moss sits at her station at the Hall County Courhouse in Grand Island. Moss has been a court reporter for 32 years. 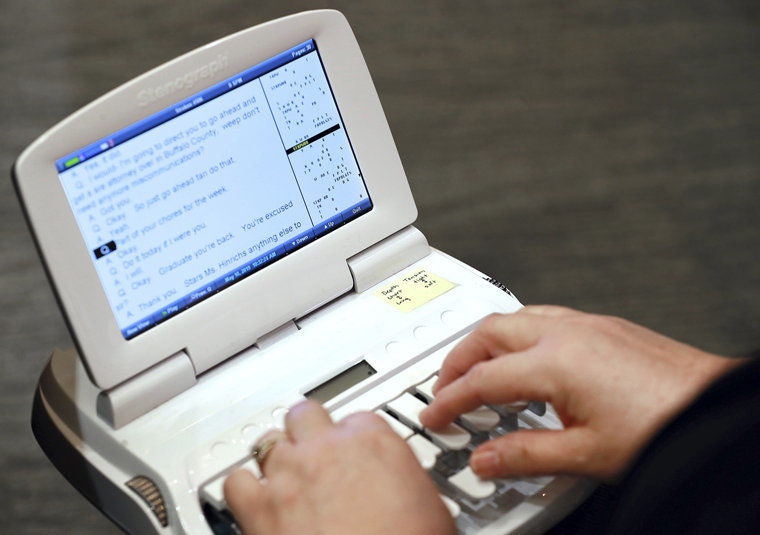 Court reporters input information on a small screen using stenograph machines. When dealing with common phrases, the machine allows them to write several words at a time.

Court reporter Lori Moss sits at her station at the Hall County Courhouse in Grand Island. Moss has been a court reporter for 32 years.

Court reporters input information on a small screen using stenograph machines. When dealing with common phrases, the machine allows them to write several words at a time.

GRAND ISLAND - If you’re smart, responsible and persistent, the court reporter business might be waiting for you.

There is a nationwide shortage of court reporters, say two women who do the job in Hall County District Court. Lisa Hagman and Lori Moss have kept a careful record of judicial activity for more than 30 years, and they’d like to see more people coming up behind them.

Court reporters are an essential part of the team that’s also made up of lawyers and the judge. The attorneys in this area “are very, very good to us,” Moss says.

They also have good rapport with the judges, who are attentive to their needs. If a judge notices the court reporter is having a problem hearing, he or she will make sure the issue is rectified.

Their work is important and they are respected for it.

In the courtroom, they get to see the entire range of human emotions. The job is also educational.

Yes, being a court reporter has its challenges. Sometimes, it’s hard to hear lawyers or people testifying. People in the courtroom might sneeze or cough over a word. A fire truck or ambulance might go past the courtroom at the wrong time. Court reporters have to capture every word, no matter how technical or obscure.

“It’s like playing the piano all day long, and don’t you miss one note,” Hagman says.

Fortunately, they have the power to make things clear. If the court reporter is having trouble keeping up with a lawyer, the judge almost always notices. If several people are talking at once, the judge will step in.

If not, the court reporter will speak up herself and ask that a sentence be repeated, or that a lawyer adjust his microphone.

Hagman used to hand out speeding tickets, as a joke, to lawyers who were talking too fast.

Still, a long day of testimony can be draining.

Even a simple car accident is often challenging. A mechanic on the witness stand will discuss exactly what went wrong with the car, referring to specific parts of the transmission, engine or brake system. A physician will discuss in precise detail what body parts were injured. That physician might be a neurosurgeon with an accent.

Court reporters learn legal and medical terminology in school. But the education continues once they get on the job.

One day they might be involved in a complicated financial case. The next day, the subject might be hog confinement.

“You learn an awful lot about a lot of topics,” Moss says.

Most of all, though, there is a sense of accomplishment.

Becoming a good court reporter takes time and dedication. When Moss and Hagman were in court reporting school, only a minority of the students stuck it out and made it a career.

It’s a difficult course of study. But after a certain point in school, “you’re just building speed,” Hagman said. The goal is to hit 225 words a minute with 95 percent accuracy.

Moss and Hagman made it.

“But see, I was a piano player, an organ player and a drummer. So my hands were used to going fast,” Moss says.

Hagman, a Grand Island native, will mark 37 years as a court reporter this summer. She worked for Judge Teresa Luther for her entire stay on the bench. Hagman will soon begin working with the new District Judge, Andrew Butler.

Moss, a native of Bloomfield, has been on the job 32 years. She has worked with Judge Mark Young for four years.

The two women are state employees.

Court reporters use stenograph machines. When dealing with common phrases, the machine allows them to write several words at a time.

It’s a different matter, though, when dealing with long, technical words.

Some people believe technology will make the need for court reporters vanish. But Hagman believes we’re not at that point yet.

Digital recording devices are used in some Nebraska courtrooms. Hagman has seen products of that work. The transcript includes too many uses of the words “indiscernible” or “inaudible,” she says.

Missing a word is not very good when somebody’s life might be on the line, or their freedom or their money is up for grabs, Hagman says.

For seven years, Moss worked with Judge James Livingston, who retired in October 2014 but still fills in.

Livingston has no interest in relying on a recording in his courtroom.

He won’t work without a live court reporter. The reasons are simple. “Expertise, efficiency, responsiveness, professionalism,” he says.

“You can read them, but more importantly, they can read you,” Livingston says. He’s yet to find a machine that can read him.

If you think about it, Moss says, court reporters are the “guardians of the record.”

Their responsibilities also include taking care of the evidence.

Hagman loves the refurbished ceiling in Judge Luther’s old courtroom. Unfortunately, a thunderstorm creates a loud noise right above the judge’s chair. “It’s basically like rain on a hot tin roof,” Hagman says. “We’ve had to stop court. Nobody could hear each other.”

There are also distractions in the courtroom. An attorney might flip his files just to make his opponent mad. That’s why it’s good a human is taking care of the record, the women say.

Some of the court reporting schools have disappeared. But there are two or three online programs that are very good, Hagman said.

Generally, court reporters take vacation when the judges do. If there’s an important day in their lives, such as a funeral or graduation, getting a day off is no problem.

If the need is less important, there are freelance court reporters. “But they’re not cheap,” Hagman says. Court reporters sometimes have to compensate substitutes out of their own pockets.

Court reporters do jobs outside of the courtroom. Some people take depositions part-time.

Some court reporters accompany students with disabilities in school.

Closed captioning for live televised events, such as sports and newscasts, is done by court reporters.

Because of improvements in technology, people can type those captions anywhere. Hagman knows a woman who does closed captioning “literally in her den, in her pajamas.”

Like anybody who’s worked in courtrooms for a long time, Moss and Hagman have lots of stories.

The two women have made great friends, and they take pride in their work.

Maybe it’s the job for you.