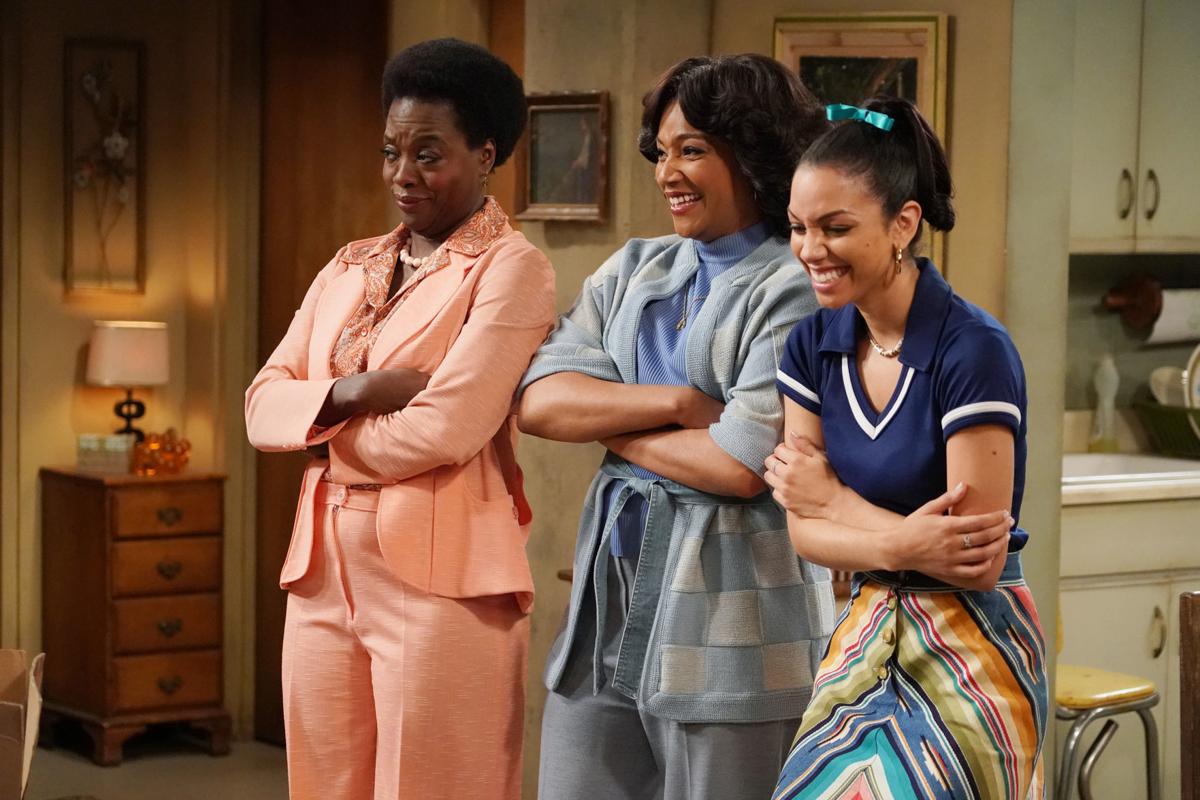 (L-r) Viola Davis (as Florida Evans), Tiffany Haddish (as Willona Woods) and Corinne Foxx (as Thelma Evans) in Wednesday's "Live in Front of a Studio Audience" re-enactment of a November 1975 episode of "Good Times." 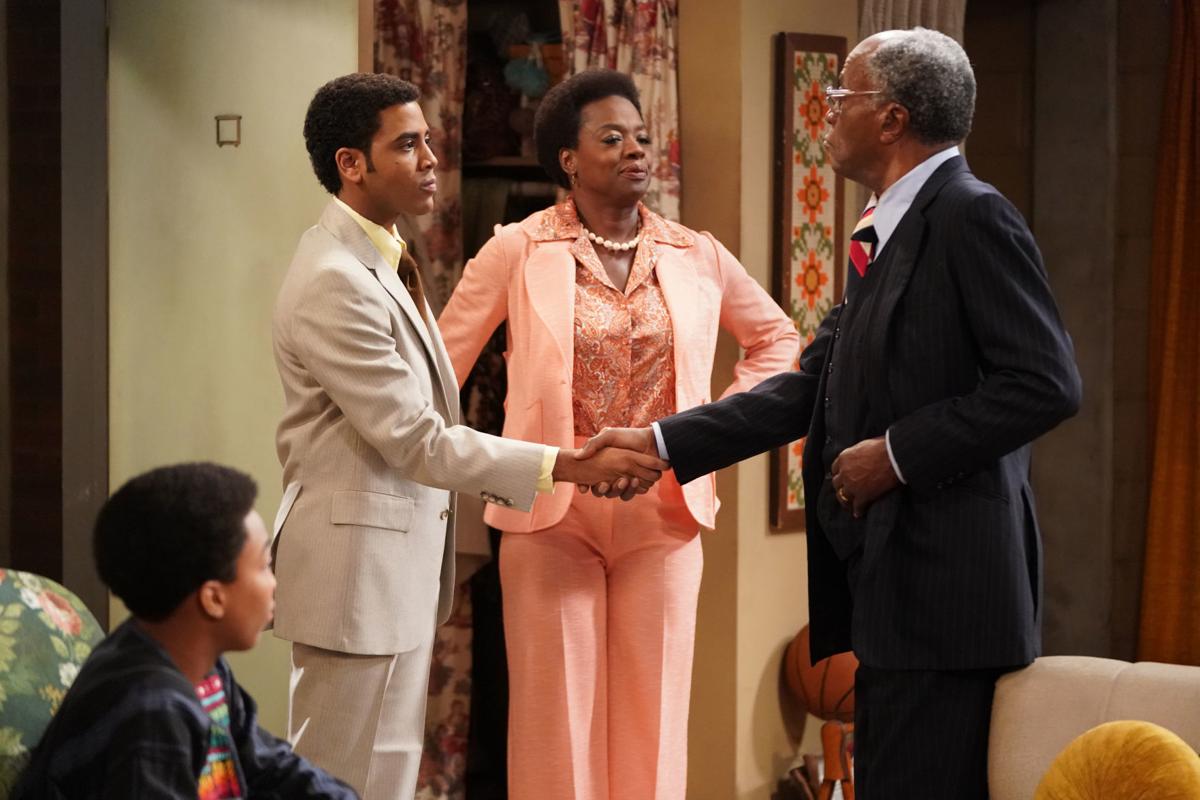 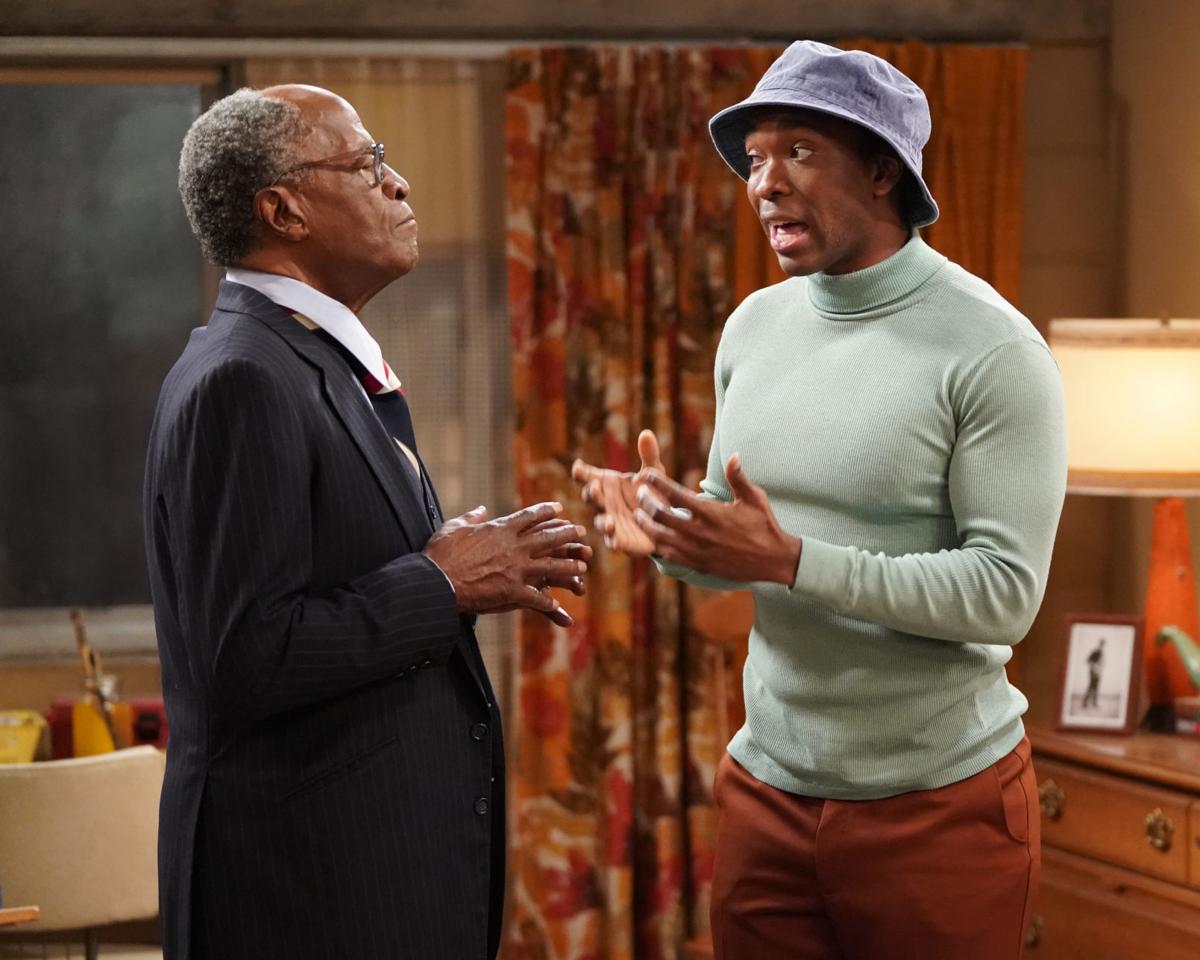 John Amos, left, an original co-star of "Good Times," appeared on the special alongside Jay Pharoah as J.J. Evans. 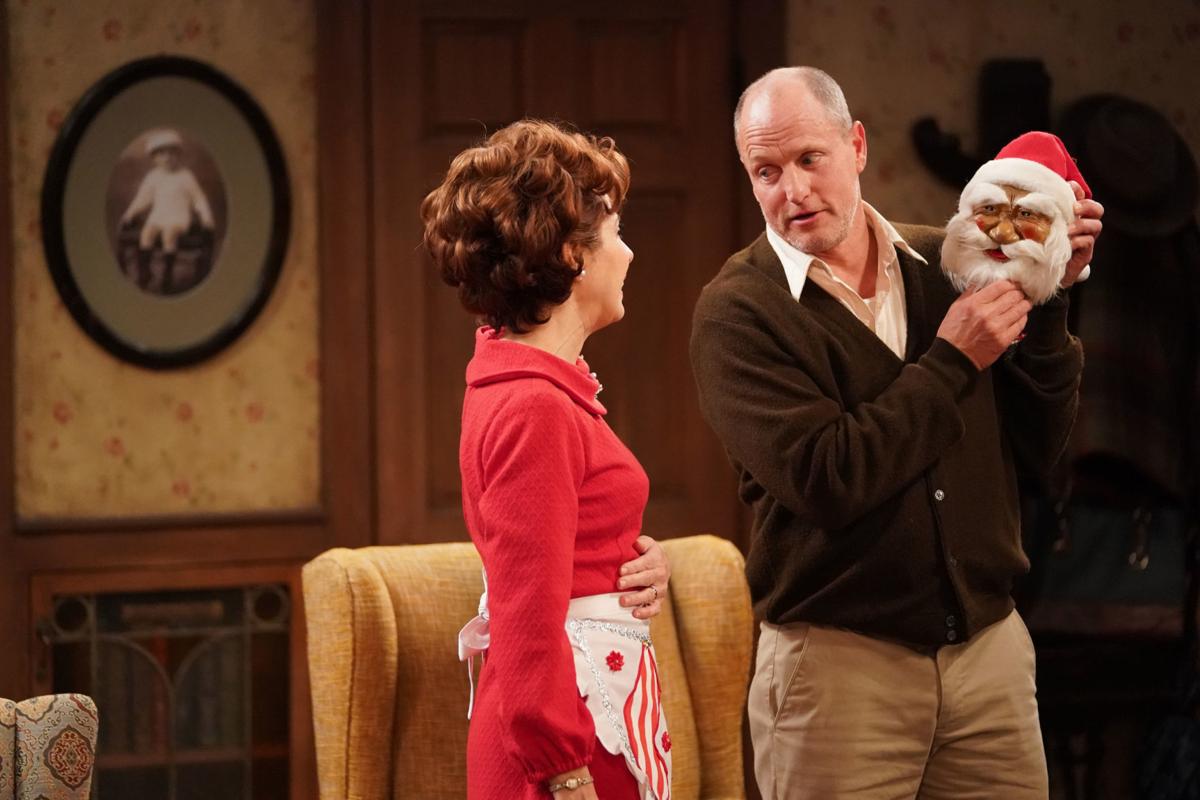 Marisa Tomei and Woody Harrelson reprised their roles as Edith and Archie Bunker in a re-enactment of an "All in the Family" episode that originally aired on Dec. 25, 1976.

Barely six months after a sweet ratings spike (15 million viewers) with their live revival last spring of episodes of Norman Lear-produced sitcoms from the 1970s, ABC returned Wednesday night with another go at this strange yet entertaining form of homage — this time re-enacting an episode of “Good Times” along with a Christmas episode of “All in the Family.”

The results of this second “Live in Front of a Studio Audience” presentation were mostly fun to watch, if at certain moments stressful, as a few of today’s actors (and one surprise “Good Times” alum) occasionally struggled with the live format and the precise rhythm of old-school, multicamera comedy dialogue. From a distance of 40-plus years, it only looks easy.

Conscious of the fact that ABC had switched from the impending House vote to impeach President Donald Trump to air the special, host Jimmy Kimmel appeared at the top of the hour (seated next to the eternally good-natured, 97-year-old Lear) and apologized for any interruptions that would surely come from that pesky George Stephanopoulos at the ABC News anchor desk. “Apparently something is going on in Washington tonight,” Kimmel cracked. “There is trouble in the Nixon administration.”

With that, ladies and gentlemen, we once again proudly present: yesterday.

As well-regarded as the sitcoms are, I still think there might be even better ratings in a show that’s nothing but one old theme song after another, performed by special guest singers and bands. (Martin Short proved as much by singing a campy version of “The Facts of Life” theme song during intermission, only to be interrupted by Kimmel, who asked what he was doing. “I’m bringing the country together in otherwise trying times,” Short answered.)

The “Good Times” episode chosen by ABC’s producers is one of its most remembered, from November 1975, in which James and Thelma Evans are at odds over an upcoming alderman election. James (“Brooklyn Nine-Nine’s” Andre Braugher) is voting for the longtime incumbent, Fred Davis. His wife, Florida (Viola Davis, delivering the special’s most inspired performance with her take on the late Esther Rolle’s memorable role), supports a younger candidate named Jimmy Pearson (played by recent Emmy winner Jharrel Jerome).

The entire Evans family — along with their outspoken neighbor Willona (Tiffany Haddish) — is caught up in the debate, arguing about which candidate can better serve the needs of their publicly housed community. Michael (“This Is Us’” Asante Blackk) and Thelma (Corinne Foxx) side with their mother. Siding with James is the boisterous older sibling, J.J., played by “Saturday Night Live” cast member Jay Pharoah, who very nearly landed his impression of Jimmie Walker’s original (and at the time sensational) breakout role.

Tensions rise when Florida invites Pearson over to the apartment for a meet-and-greet, just when James’ candidate, Davis, shows up for a chat. The special’s big reveal was that John Amos, the original “Good Times” star who played James, showed up to play Davis. As great as it was to see the 79-year-old actor, the live repartee nearly got the better of him a time or two as he reached for his lines, aided by some ad-libbing from his appreciative co-stars.

It’s perhaps more important to note the history here rather than the performance. Amos left “Good Times” after the third season; he was reportedly fired after he raised concerns that the show, which increasingly focused on J.J.’s popular antics (“Dyn-o-mite!” etc.), was treading too far into stereotypes. The writers killed James off with a car crash. The hug exchanged between Lear and Amos at Wednesday’s curtain call therefore seemed poignant — maybe just a Hollywood hug, maybe something more significant all these years later.

After “Good Times” (and live reports from the House votes on the articles of impeachment), “Live in Front of a Studio Audience” segued to the “All in the Family” episode, which was skillfully presented but carried an air of been-there-done-that. While it’s a fun and experimental idea to restage these fine works of television, I don’t get the idea of bringing back the same cast to do it again. Why not let another group of actors take a turn at playing the Bunkers?

On the other hand, both Woody Harrelson and Marisa Tomei, previously lauded for playing Archie and Edith Bunker last May, have only improved their impressions of Carroll O’Connor and Jean Stapleton — especially Harrelson, with his “Step aside, hey” Queens accent and Archie’s limitless prejudice against just about anyone. “Don’t be singing a song about Christmas in Spanish, God doesn’t want to hear that,” he admonished a short-lived character named Teresa Betancourt (played here by Justina Machado). “The world was started by Adam and Eve, not Desi and Charo.”

The original episode first aired on Dec. 25, 1976, and revolves around an unexpected visit from a young man named David (Jesse Eisenberg), an old college friend of Archie’s son-in-law and constant nemesis, Mike (Ike Barinholtz). David is a draft-dodger living in Canada who has quietly returned to New York; Archie, meanwhile, has invited his buddy Pinky Peterson (Kevin Bacon) to Christmas dinner. Pinky lost his son in the Vietnam War.

The fact that Pinky and David are seated together can still create that classic, Lear-style American tension, brought to a head just as the family begins carving Edith’s 20-pound turkey. Everyone expects a conflict to ruin the day, but it turns out the only conflicted person is Archie, who cannot fathom how the two men are so easily able to reconcile their perspectives.

It’s a touching moment, yet it’s still difficult to reconcile the effort that goes into the reach-backs with the intent. The sets look meticulously accurate, the actors pretty much get their lines right and ABC went all out with commercials for its current shows (“The Good Doctor,” “Stumptown,” “Mixed-ish”) re-edited to look like prime-time promos from the ‘70s. Nobody loves the ‘7os more than ABC, which ruled the roost back when even the average ratings would incinerate anything on today.

This stunt is playful but not meaningful — even when the episode topics tend to faintly resonate. Something’s still amiss; when it comes to nostalgia, something always is. If they must return for a third special, I think they should go all out and take on the riskiest material of all.