UNK student Bailey Premer checks a patient’s vital signs at a mobile medical clinic in Panama. Twenty-one members of the UNK chapter of Volunteers Around the World recently traveled to the Central American country to work in mobile medical clinics that provided free care and medication to more than 300 patients. 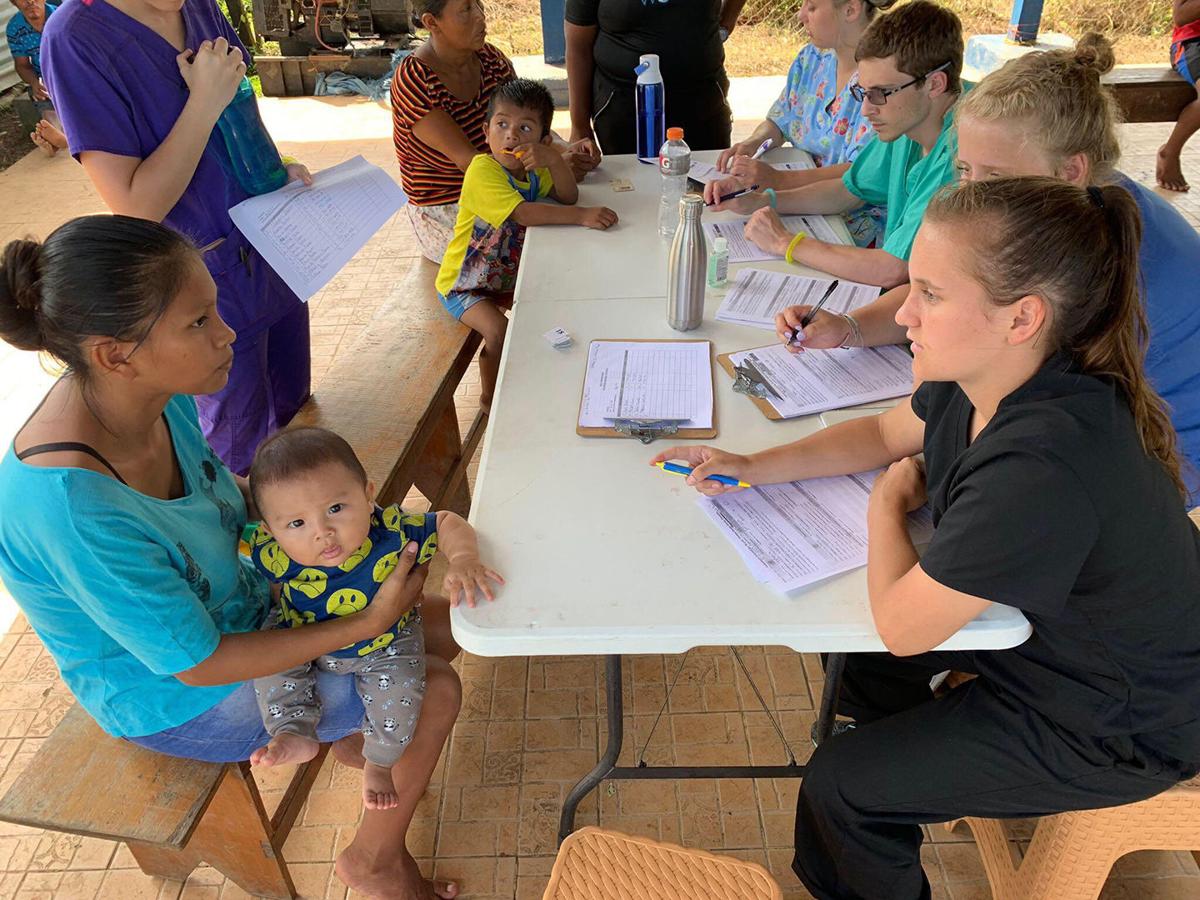 UNK students volunteer at a mobile medical clinic during a recent trip to Panama.

UNK student Bailey Premer checks a patient’s vital signs at a mobile medical clinic in Panama. Twenty-one members of the UNK chapter of Volunteers Around the World recently traveled to the Central American country to work in mobile medical clinics that provided free care and medication to more than 300 patients.

UNK students volunteer at a mobile medical clinic during a recent trip to Panama.

That’s how University of Nebraska at Kearney students describe their recent medical outreach trip to Panama.

Twenty-one members of the UNK chapter of Volunteers Around the World traveled to the Central American country to work in mobile medical clinics that provided free care and medication to more than 300 patients.

“I think a lot of people take for granted what we have here in the States,” said Bailey Premer, a junior from Kearney. “Down there you see all the poverty and the lack of opportunities they have to get even basic medical care.”

UNK students, most of whom are pursuing degrees in health care-related fields, brought that care to six different communities during the two-week outreach trip that began in late May. Working alongside Panamanian doctors, the students established mobile medical clinics in Bocas del Toro, a province that includes an island chain in the Caribbean Sea.

There is no local hospital there, and many of the residents don’t have access to clean water, medication or hygiene products. Chicken pox outbreaks and parasites are common, and many treatable ailments and infections worsen over time.

Hannah Thompson, a junior nursing student from Arlington, said the conditions are much different from life in Kearney.

“For us, it’s so easy to go to Student Health or call the doctor’s office and schedule an appointment,” she said. “There’s really no way for them to get medical care if they need it.”

Thompson, who also participated in last year’s trip to the Dominican Republic, is the team leader for the UNK chapter of Volunteers Around the World, a humanitarian organization that provides medical, dental and veterinary care and health education to impoverished communities around the world. UNK’s chapter, which started in 2015, is one of approximately 130 at colleges and universities across the United States.

Premer, a pre-medical student studying biology with a health sciences emphasis, was introduced to the organization by his girlfriend Kaitlyn Pineda, a fellow UNK student from Kearney.

“I thought it was an amazing way to give back, experience the world and help people,” said Premer, who had never traveled outside the U.S.

He was struck immediately by the remoteness of the area, where residents use nonmotorized, wooden boats to go from island to island or travel to the mainland.

“I’m not the biggest fan of boats,” Premer said with a smile.

For UNK junior Trevor Daubert, a pre-medical student from Omaha, the trip was an opportunity to serve others while experiencing another culture and learning from the local physicians they shadowed.

“We got to immerse ourselves in the culture in a completely different way,” said Daubert, another first-time international traveler. “It’s something very different from what we experience in the United States.”

Daubert also worked on his Spanish-speaking skills during the trip, in preparation for his future career.

“Spanish is a rising language in the United States and it’s really important that physicians can understand Spanish and communicate with Spanish speakers in an effective way in a hospital or clinical setting,” he said.

In addition to their medical clinic work, UNK students also painted a local school and taught children about dental hygiene during their stay in Panama. Each member paid for their own trip, which cost about $3,000, and the group raised nearly $1,000 to purchase medication and dental hygiene supplies for the people they served.

According to Premer, it was worth every penny.

“Helping other people, it makes a huge difference, even if you don’t realize it,” he said. “This trip really emphasized how much a couple dollars or a kind act can change someone’s life.”

For more information on UNK’s Volunteers Around the World chapter, email unk.vaw@gmail.com.

The following UNK students, listed by hometown, participated in the Volunteers Around the World trip to Panama: